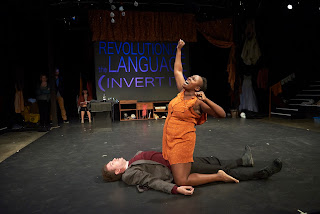 Frank Theatre’s production of Alice Birch’s play Revolt. She Said. Revolt Again. is fantastic.  It’s a bracing, oversexed, subversive valentine to language and the idea of turning an ordinary life inside out and making it extraordinary.  Director Wendy Knox’s six person ensemble of Charla Marie Bailey, Joy Dolo, Jane Froiland, Emily Grodzik, Grand Henderson and Gabriel Murphy are fearless in the way they display themselves and interact onstage.

“This play should not be well-behaved.”

This isn’t a standard political play suggesting middle of the road solutions.  It’s a laughing, screaming, horny wake up call to stop letting your life dribble away minute by minute.  Revolt. She Said. Revolt Again. wants you to reconsider pretty much everything society at large has been trying to sell you - standard gender roles, getting married, having kids, not making waves at your job, not admitting too freely that sex is a good and healthy thing to be shared between consenting adults.  Frank’s production doesn’t want you to waste another minute being ordinary or bored. (And this collection of scenes add up to a short play, so you can head out into the rest of your evening and get started.)  Frank also wants to remind you that theater isn’t here to anesthetize you with entertainment - it’s more interested in entertainment that’s going to wake you up.

A woman takes language and turns it back around on a man, the two of them consumed by a desire not just for sex but for dominance.  They also navigate around the notions of sex as something done to someone, versus with someone.  It’s not really sexy, but it’s hilarious.

“I want to buy dogs and then bury those dogs in the garden we share.”

Also amusing is the incredibly awkward conversation that ensues when another woman must tell another man that his enthusiastic marriage proposal is not only ill-timed, but just generally a really bad idea.

Darker and most peculiar is the visit by a woman to her absentee mother, her own daughter in tow.  The woman grapples with her mother’s choices, and the unintended consequences that she herself may not have been the best candidate for parenting, but brought a now damaged child into the world anyway.

A woman states flatly that her hours at work and way of working will need to change, and nothing her boss does to cajole her back into the status quo looks like it’s going to work.  Supermarket employees are confronted with the spectacle of a woman collapsed inside a shopping cart who then springs to life in a very hyper-sexualized fashion.

“There is a point at which the thoughts are not enough.”

The fact that women drive the narrative here isn’t an accident, and is one of the things that allows the storytelling to feel so fresh and surprising.  Birch revels in language.  She knows its power, and gives it to her characters to wield in unexpected but very savvy ways.  Language nerds will love this play on a whole other level.  But really anyone who wants theater to be a vibrant, vital and important art form can find something to love here.  No actual sex ever takes place, but the ideas of sex and sexuality are used as signifiers of freedom and power in exhilarating ways.

Revolt. She Said. Revolt Again. is a great piece of theater.  It’s very different than Frank’s production of Citizen earlier this year, but in its own way it’s also a war cry against the evils of complacency and acceptance of injustice and inequity.  There’s a little part of my brain that always fears, “Oh, I hope it doesn’t get too ‘political’.” But then I see Frank Theatre’s production and I wonder where that worry comes from.  Frank always delivers smarter, more nuanced theater than the kind of clumsy sledgehammer approach I’ve been subjected to by other theaters in the past.  Trust Frank, and go see some theater that’s just as wonderfully crazy and dangerous as the shows you used to love. (through October 22, 2017, at the new Gremlin Theater space)