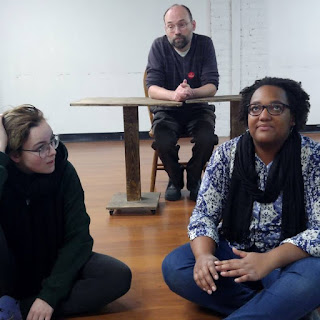 Playwright Eli Effinger-Weintraub writes some of the funniest, smartest, strangest, most human plays being created locally right now.  And I’m happy they've found artistic champions in Gadfly Theatre.  So I was very excited to see they were producing their play The Crown of the Holly Queen.  Despite some hurdles it needs to overcome (described below), it’s still well worth seeing.  Original queer theater is still all too rare a thing, strong writing like Eli’s even rarer, so you should catch it whenever possible.  Plus, you could argue it’s a holiday show, since it revolves around the winter solstice, but it’s a holiday show filled with rites of pagan magic, reincarnation of mythological figures in the present day, and, of course, lesbian sex.

“The good news is I’ve figured out what’s wrong with you.”
“What’s the bad news?”
“Everything else.”

Quirk (Piper Quinn) hasn’t been feeling so well as the summer passes through fall into winter, and it has her best friend Alex (Jada Pulley) concerned.  Consulting with their mentor Gwin (G. Zachariah White), they arrive at an unusual diagnosis.  Quirk is the reincarnation of the Oak King, and Alex is the latest personification of the Holly Queen.  As winter solstice arrives, the Oak is supposed to die with the Holly ascendent.  However, things immediately start turning around with the lengthening of days and the returning of the light, and so then the Holly must die so the Oak can rise.  Given that no one really wants to kill anyone else, the solution lies instead in the Little Death, aka orgasm, aka sex - which, just like murder, tends to complicate a friendship.

“Your smoke alarms are in working order?”
“That’s a terrifying question, but - yes?”

But Quirk and Alex aren’t the only ones dealing with unexpected new identities.  Quirk, Alex and Gwin are practicing pagans, and their sacred grove of trees is under threat from an energy company that wants to run a pipeline through that patch of undeveloped land.  Granted, it’s a pipeline for geothermal energy and thus a useful step against global warming.  But the pipeline has been cutting through a number of sacred groves and killing the spiritual energy in those spaces.  And it turns out that’s not an accident.

The other old lives making a new resurgence come from the Round Table of King Arthur’s Camelot.  The woman in charge of the pipeline project is Morgan (Kate Kunkel), aka Morgan le Fay, the powerful sorceress who was Arthur’s lover and greatest nemesis.  Morgan’s intern Gavin (Logan Gilbert-Guy) turns out to be the latest incarnation of the famous knight Gawain.  Oh, and Gwin used to be in charge of the Wild Hunt (look it up), and Gwin alone seems to have full recognition of the past lives lived by themself and others.

“Believe me, if you remembered our prior relationship, you’d stand as far away from me as possible.”

There is a whole lot going on in The Crown of the Holly Queen, and it’s an invigorating challenge to keep up with.  In fact, even though there’s only five characters onstage, each of them has so much story, not to mention an alternate identity with even more backstory, that the canvas almost seems a little overcrowded.  Quirk and Alex could be a play all by themselves.  Right now, the twists and turns of their evolving relationship whip by so fast, it’s hard to process them in a way I think the play wants us to.  There’s also the matter of their pagan faith and rituals which are central to so much of the plot.  We don’t get to spend a lot of time sitting in this world and getting to know it fully.  It’s a window into another way of life but we’re held at a remove from this window.  Similarly, the centuries old battle between Morgan and Gavin could also be its own play.  Gwin and the Wild Hunt, same note.  Cramming them all together, along with the story of the pipeline threatening the sacred grove, it sometimes feels like no plot thread or set of characters gets a chance to fully breathe.  But as I’ve said before in reviews of other shows, I’d much rather a play be too ambitious and take real risks than just play it safe.  I’d rather a play be about too much than too little.  The Crown of the Holly Queen goes all out in regard to complex character and story.

“Some people are bad with feelings, dear.”

In most circumstances, I could more easily note what shortcomings are due to the production or specific cast members but honestly, here the venue makes that kind of determination almost impossible.  I’m torn about even bringing it up but I can’t pretend the venue - Crane Theater’s new studio space - isn’t a major factor dragging the production down.  I’m not alone in being happy that the folks behind Nimbus Theater found a home in the new Crane Theater space that they’re in the ongoing process of renovating.  The Nimbus crew has always been very generous in helping to provide a home for any number of fledgeling and small theater companies, in and out of the Minnesota Fringe Festival, many of them focusing on new work like Nimbus itself. (I enjoyed Nimbus’ production of Redemption this spring, and was sorry to miss their most recent offering, Ludlow.)  But the opening of the new studio space in the old warehouse across the lobby from the larger Crane main stage has been, to be generous, a little rocky.  I saw the inaugural production in the studio, Sing To Me Now, which was running at the same time as The Minotaur over on the main stage.  There’s no sound buffering between the two spaces at all.  While The Minotaur was the louder of the two shows, the sound bleed wasn’t a chronic problem that threatened to detract from the other show.  Here, with The Crown of the Holly Queen, it’s a big problem.

“That’s not how reality works.”
“Are you sure about that?”

And the killer is, the production across the hall on the main stage is another queer theater, 20% Theatre Company, doing another new work, The Terror Fantastic.  In an ideal world, these two productions would be peacefully co-existing.  Currently, it sounds more like a battle to the death.  The Terror Fantastic, as you might imagine from having the word Terror in the title, is built around elements of horror - mental illness and monsters to be exact.  And there is screaming.  A LOT of screaming.  What feels like nearly constant screaming.  The Crown of the Holly Queen, not so much with the screaming.  The Crown of the Holly Queen has a lot of peaceful, intelligent conversation and complex discussions going on.  And it has tender, emotional relationship moments going on.  And all of them are accompanied by a litany of screaming from the theater across the hall.  This is not the fault of The Terror Fantastic.  Both 20% and Gadfly paid to rent a theater space.  But right now, Gadfly is getting the shaft.  And so is The Crown of the Holly Queen.  The one saving grace is that Terror Fantastic is 90 minutes with no intermission and so they’re done about half an hour before Holly Queen.  So everyone does get that final thirty minutes of environmental silence around the play.  The Gadfly actors are to be commended for their near Herculean powers of concentration.  They stay in the moment, they stay in the play, they compel the audience to continue paying attention.  But they shouldn’t have to work this hard.  I sincerely hope Gadfly is getting a significant discount on their space rental because they might as well be out in the middle of the parking lot for all the control they have over the sound in their space.

“I’ve been waiting for this since college.  Or 700 years, depending on who you talk to.”

And this makes it almost impossible to know where any problems with the production might actually lie.  There are three really standout performances in the ensemble - Piper Quinn as Quirk, G. Zachariah White as Gwin, and Kate Kunkel as Morgan.  Despite all the distractions, they turn in very nuanced and intriguing spins on their characters.  Quinn gives the production its emotional depth.  White manages to make the metric ton of exposition and storytelling fun to listen to, and active in a way that surprised me.  Kunkel skillfully walks the tricky line of not knowing she’s the villain for most of the piece, and then turning on a dime and threatening to burn the whole thing down.  Between the three of them, they hold the narrative together despite the odds.  It’s hard to know whether the rest of the cast just isn’t up to their level, or was somehow let down by the director who didn’t push for anything much deeper than just learning all the lines, or was just undone by all the damn screaming from the production across the hall.  There are little moments, like an actor’s red fingernail polish being flourished in a story about red holly berries, or one character mimicking another character’s movements behind their back because they’ve just heard the same story so many times.  These moments make me think director Cassandra Snow was paying attention to the little things just as must as the larger story concerns.  So again, can’t tell clearly what might be problems inherent to the production itself, or what might just be the venue kneecapping the play before it has a chance to stand fully upright.

“Sex and death are the only things that work.”

You should see The Crown of the Holly Queen.  And the Crane should invest in some serious soundproofing upgrades before they rent out that space again to competing productions.  Because right now, they are competing rather than co-existing, and that’s a shame. A smart, fun, new play like The Crown of the Holly Queen deserves better. (running through December 10, 2017)

(photo courtesy of Gadfly Theatre Productions - foreground: Quirk (Piper Quinn) and Alex (Jada Pulley) have a heart to heart as [background] Gwin (G. Zachariah White) looks on in The Crown of the Holly Queen)

Terror Fantastic has issues with the Gadfly production as well. Unfortunately, the permit from the city needed to finish the sound proofing didn't come through in time. It is tough on both companies...and was unforeseen. nimbus has everything ready once the permit DOES come through, but it is a real shame that there is the conflicting loud/soft moments between the shows!