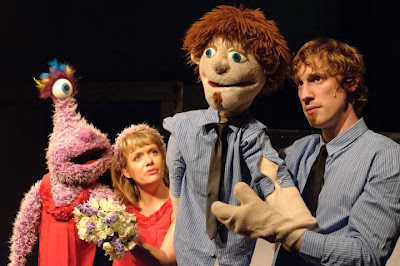 "Avenue Q," currently running at Mixed Blood Theatre, is a filthy little puppet show. And I mean that as a compliment.

"Avenue Q" is also a fairly traditional (and good) piece of musical theater, in the romantic comedy vein - albeit with a lot of swearing. And I mean that as a compliment.

"Avenue Q" also has a pretty big streak of dark, fatalistic humor running through it for something with such a bouncy rhythm. But I also mean that as a compliment.

"Avenue Q" at first seems like a really weird pick for a theater like Mixed Blood, but the longer you watch it, the more it seems like a perfect fit. And boy, do they run with it. This is the kind of hit show you don't have to be embarrassed about liking, or producing.

Mixed Blood regularly produces theater with a healthy mix of different ethnicities. The only difference here is that in addition to Caucasians living alongside African Americans and Asian Americans, and heterosexuals alongside homosexuals, there are also furry monsters and adorable (but evil) teddy bears in the melting pot.

To clarify, Gary Coleman, Brian and Christmas Eve are the only human beings on Sesame Street... er, Avenue Q. Every other character, human or monster, is portrayed by a puppet. A big heap of praise has to go to the puppet designers Wayne Krefting and Marcia McNamara because these muppet-style puppets are brilliant - looking in the human cases very much like cartoon versions their actor-operators. Another pat on the back needs to go out to costume designer Renata Shaffer-Gottschalk, who had the daunting task of outfitting both the puppets and their human operators in exactly the same costumes (with multiple costume changes for each). It's a bit of visual mimicry that goes a long way to reinforcing the reality that the human is the accessory to the puppet on their arm, rather than the other way around. The puppets take the spotlight in these pairings. Of course you couldn't have one without the other, and it's a subtle perception shift, but it makes a world of difference.

The actors all also deserve high praise for making the puppets work so well. Whether the acting partner was human or felt and furry, everyone had clearly bonded. Little things snuck up on me, such as when two actors performing as puppets were speaking, the human actors would focus their attention, as well as that of their puppet, on the other puppet they were speaking to, not the human across from them, which runs counter to everyone's natural instinct. This helps the audience to focus on the puppets as real characters (vitally important when the puppets are your romantic leads in a musical). My favorite (I believe unintentional) moment of human/puppet symbiosis was in the final pose after a strenuous musical number. Tom Reed was just slightly out of breath, and his puppet's mouth was ever so subtly breathing a little harder right beside him. That's how bonded these actors are with their fuzzy doppelgangers onstage, which is a heck of a lot of fun to watch in action.

(Tom Reed has now accomplished the next step on his path to world domination. The man scares me but I can't look away. First all forms of improv comedy, then back-to-back one man musical parody hit Fringe shows, now musical theater and puppets. He's so funny, it's always a pleasant surprise when he opens his mouth to sing and you realize, it's not a joke. The guy's got a great set of pipes. [shhh, just don't make him angry, who knows what he'll do next] Go, Tom!)

Nearly all the cast also does double duty in the band at various points throughout the evening - Allen, Mayson and Skellenger all hit the keyboard; the regular keyboardist, musical director Jason Hansen, also gets his own puppet cameo; Mayson also plays bass; Skellenger, the trumpet; and Hamilton gives us some flute and saxophone. Big kudos to percussionist Andy Mark for keeping the tempo of the evening bopping along.

"Avenue Q" is not for the easily offended, or faint of heart. One of the catchiest numbers in the whole show is entitled "The Internet Is For Porn." There is an extended sequence of full-on "naked" puppet sex throughout the song "You Can Be as Loud as the Hell You Want (When You're Makin' Love)." If you have a low threshold for non-PC humor, the song "Everyone's A Little Bit Racist" is probably going to make you fume. Rod's love poem to "My Girlfriend Who Lives In Canada" is his enormous overreaction to people trying to bring him out of the closet (and denial) way before he's ready. It is a stunningly dirty song that just keeps getting dirtier, right up to the big finish that leaves the rest of the cast with mouths agape in shock. I have to admit that, as a compulsive listener to the original cast album, all of these songs make me giggle and don't bother me in the slightest. But I understand that not everyone has a sense of humor that can embrace comedy that broad or naughty. If you can let yourself kick back and enjoy, you might feel a little guilty, but the show's crooked heart is always in the right place.

For a show that isn't afraid to shock, "Avenue Q" is also surprisingly sentimental (in a good, earned way, not a schlocky one). One of my favorite numbers is the ballad "There's A Fine, Fine Line" in which Kate Monster decides she has to move on from her stalled out relationship with Princeton and start looking out for herself. It's a testament to the world this production creates (and Allen's performance) that by the time this number rolls around, the audience is completely on the heroine's side and feels deeply for her - even though her head is a bulbous thing covered in purple fur with a single eye perched atop a long stalk that grows out of the top of her skull.

The wistful puppet trio of Nicky, Princeton and Kate, all belting out "I Wish I Could Go Back to College," when their lives were simpler, is a heart-tugger as well. But it also has a lot of laughs tucked inside it, just like the swoony love ballad "Fantasies Come True" where Rod and Kate sing of their respective crushes on the men in their lives. The songs tweak romantic and sentimental conventions for humor at the same time they're reinforcing their power over the human (or monster) heart. It's an entertaining balancing act the production pulls off again and again.

Speaking of balancing acts, Eric Mayson as Trekkie Monster warrants some hazard pay for fearlessness. Trekkie is a life-size pink monstrosity mounted on Mayson's back, operated by a series of levers attached to his legs and arms. Mayson's feet are also contained in the contraption, as if he were lumbering around on enormous platform shoes - except he's taking a step back everytime Trekkie steps forward. I'm reminded of the well-known praise for Ginger Rogers, "She did everything Fred Astaire did - backwards, in heels." Trekkie flails around so freely, bounding up and down stairs, and through doorways way too low for him, that you often forget how treacherous the things he's doing could be.

Tom Barrett's two-level set gobbles up every available inch of playing space in Mixed Blood. Sliding walls and doors and staircases move on and off at high speed thanks to the well-coordinated moves of the actors, and the multiple locations appear and disappear without a hitch, keeping the evening moving.

With such an episodic text and large ensemble, director Jack Reuler has his work cut out for him, keeping all those balls in the air and making it all seem like it's one multifaceted narrative moving toward a single satisfying ending. Reuler chose his people well, and guides them expertly. The addition of puppets to the mix doesn't seem to have phased anyone one bit. The production of "Avenue Q" makes it seem like they do this sort of thing all the time.

It's not perfect, of course. Some voices are stronger than others. The choreography by Lauren Chapman is more than a little cramped in that space. Plus, dancing with a puppet is a whole lot more challenging than just acting with one. Suddenly, you can end up with four left feet, even if your puppet doesn't have any feet. And God bless Rose Le Tran, she's such a well-trained actress that she can't seem to bring herself to butcher the English language quite as rigorously as Christmas Eve repeatedly does. While that means that we don't get quite as thick (and frankly, racist) an Asian American accent as originally intended, and thus she's much easier to understand, I have to admit I miss some of the goofy charm of the willfully mispronounced ballad "The More You Ruv Someone."

I also have to admit I'm not entirely on board with the show's smiley-faced nihilism. The show's big opening group number is "It Sucks To Be Me," and while it's funny, by the end of the show, it doesn't suck much less to be them. Which is why the closing number "For Now" posits that "well, life isn't great, but at least it's short - even the good parts." Yikes. (And let's not forget the toe-tapping ditty that pays homage to "Schadenfreude" - happiness at the misfortune of others.) But maybe that's the point. As my foot is tapping and my head is bouncing along, I have to stop and think, "Wait. What the heck am I so happy about? This song is depressing." Deliberate cognitive dissonance in a musical? Well played, Avenue Q, well played. Just like the audience gasping the first time a happy puppet sings "F--k," you either roll with it, or you don't. I'd encourage you to roll with it. Most musical these days are lucky if they have even one memorable song. "Avenue Q" has well over a dozen. "Avenue Q" is a heck of a good time.