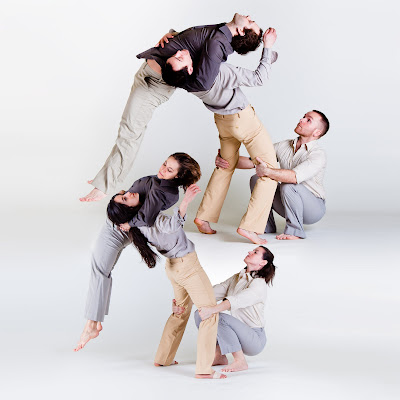 Just a heads up, since this is a "blink and you miss it" kind of thing. I'll be posting a review after, but I wanted to give an extra shout out because of the brief (this weekend only) run.

Jeffrey Peterson, who concocted one of my favorite Minnesota Fringe Festival shows last year (good lord, was it only last year?) Thinkingaview/CorresponDance has come up with a brand new dance piece (with co-director/choreographer Melissa Rolnick) to blend and bend genders for us, called Fe/Male for four performances only at Intermedia Arts. (I was not alone in loving the Fringe show - just check out their audience reviews.)

"Fe/Male choreographically hypothesizes on gendered power, intimacy, and joy. Repeating the same dances twice: once by an all-female cast and once by an all-male cast, Fe/Male seeks to uncover our preconceptions about the nature of gender. Choreography and direction by Jeffrey Peterson and Melissa Rolnick."

It's starting to fill up, so reservations in advance are recommended - email fe.maletickets@gmail.com

Also on tap this weekend, for a longer run, is the return of a Fringe musical from Fringe 2009, The Red Tureen, a cooperative production of Eat Street Players and Doolin & Dingle (which, seriously, for the names alone...)

Eat Street Players apparently also have a Fringe show coming up this summer called 19 Cows Leaving Beirut (which, again, for the title alone, aren't you curious?)

Discounts
Get $2 off on any performance
or
2-1 for the performances on June 4th and 5th.
** Friends of the Irish Fair
** Fringe Button (any year)

Returning to his boyhood home in western Ireland, young Father Padraig Bones is about to learn that in Famine Ireland, the truth is the first hungry casualty. “The Red Tureen”, a new musical to be presented by Eat Street Players at the Howard Conn Theater in Minneapolis, June 4-12, 2011, follows Padraig in his hungry struggle against British policies that turn food into a weapon. The fate of his beloved Kilkieran Valley lies in the balance.

According to composer Kevin Bowen, “The Red Tureen” is fiction, but based on real people who suffered in the Irish Famine and struggled to survive. “Their lives were simple, but remarkable, and we know only the bare outlines for certain. So now we attempt to fill the gaps.”

Bowen and librettist James Lundy, close friends since their days at Gustavus Adolphus College nearly thirty years ago, created “The Red Tureen” over the past five years. In abbreviated form at the 2009 Minnesota Fringe Festival, “The Red Tureen” was named a “Must See” production, and offered audiences “…history and mystery, but also the things singers love to sing about: romance, anguish, and humor” (Debra O’Connor, St. Paul Pioneer Press). The current production premieres the story and music in their entirety.

“The Red Tureen” is directed for the stage by Michael Sheeks, with musical direction by Andrew Kust, orchestration by Martha Davis, and dramaturgy by Jo Holcomb. “The Red Tureen” cast features Bill Marshall as Padraig Bones, Aly Westberg as Maeb McCullen, and Chris Deutsch as William Bones."