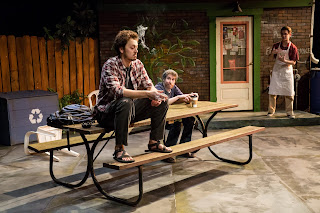 Time on stage exists very differently for performers than it does for the audience.  It’s like people in a social situation who get nervous if there’s a silence and feel like something’s wrong if someone doesn’t fill it up immediately with talking.  It’s hard to just let yourself “be” - in real life or on stage.  The people you can be comfortably quiet with are rare and precious.

“The state of having just lost something is like the most enlightened state in the world.”

One of the many reasons after catching the theater bug that my actor phase quickly passed instead into writing and stage management is I had no reliable sense of time on stage.  I was always acutely aware that I was being watched.  I had a heck of a time ever disappearing into character and story and just living there.  Part of me was always worried I was wasting precious time out of people’s lives that they would never get back, and consequently rehearsals for me were always about slowing the hell down.  Not talking at a lightning fast pace.  A pause that seemed endless to me was next to nothing for the people watching.

“Killer Jamball and the Jolly Kangaroo.”

Pulitzer Prize-winning playwright Annie Baker loves just giving actors permission to breathe and just be together onstage.  It’s one of a host of ways in which she’s a brilliant storyteller.  The ability to command the stage, and the audience’s attention, so often without saying a word, is what makes the cast of Baker’s play The Aliens so remarkable.  It’s what makes Walking Shadow’s production of The Aliens such great theater.

“…the way she would sleep with her head pressed so hard against his chest that he’d wake up with bruises in the morning.”

Director John Heimbuch seems to have found the perfect trio to bring Baker’s misfit characters to life.  In her fictional New England town of Shirley, Vermont, two slacker musician friends Jasper Kopatch (Paul Rutledge) and Kevin Jano (KJ) (Paul LaNave) regularly trespass into the backyard trash and recycling area of the local Green Sheep coffeehouse and while away their days together in companionable unhurried conversation.  Jasper never went to college, and KJ dropped out.  Jasper’s working on a novel, while KJ conjures up song lyrics for Jasper to set to music on his guitar.  Jasper’s trying not to succumb to the despair or anger that comes with his recently broken heart.  KJ is largely childlike, sometimes manic, in his wonder and delight at the smallest ripples in the details of their daily existence.  Other friends are mentioned but never seen.  One gets the feeling the two of them are the only ones who enjoy each other’s company.

“Don’t forget to come back from band camp, Shelmerdine.”

Into Jasper and KJ’s laid back energy field wanders high schooler and coffeehouse employee Evan Shelmerdine (Spencer H. Levin).  Evan’s nervous uncertainty is slowly eroded away by repeated contact with Jasper and KJ.  Evan remains easily bewildered or shocked by the two friends throughout the play, but the fact that these older, more worldly guys want to befriend him has a strangely positive effect on Evan.  Evan needs to give himself more permission for the little transgressions in life, and Jasper and KJ push him by their unconcerned example.  You wouldn’t exactly call them good influences or role models in a conventional sense.  But at the start of the story, Evan doesn’t even know how to stand still properly.  He’s constantly making adjustments in his posture, as if he wasn’t entirely comfortable in his soon to be adult body yet.  Evan’s still Evan at play’s end, but he’s learned a lot.  You can tell by the way he carries himself.  (The physical work by Levin here is pretty amazing to watch.)

In contrast, the stillness of both Rutledge as Jasper, and LaNave as KJ is mesmerizing to watch.  Whether silent or speaking, the emotions crossing their faces tell a very specific story.  The things they can’t say get expressed nonetheless.  You can see them thinking.  And this isn’t the kind of bad, pretentious acting that happens when performers are acting between the lines rather than on the lines, creating unnecessary pauses so we can watch them “feel” what their characters are going through, not trusting the dialogue alone to do the trick.  No, this is the playwright and the director specifically giving these characters room to just be present, and the actors the chance to fill that time with a well-rounded and detailed sense of humanity.

“There’s nothing.  There’s a f**king war memorial and a soda fountain and that’s it.”

Should I be this captivated by a story like this?  In some ways it’s strangely unlike Annie Baker to lavish her attention on characters like these.  On one level, it’s just three straight white dudes bumbling their way through life.  There’s plenty of hetero white male privilege stories littering the entertainment landscape.  As a friend said to me the other day regarding The Aliens, “I know the guy who’s obsessed with Bukowski.  I dated that guy.  I broke up with that guy for a reason.  Do I really need to see him on stage?  Do I really need to give him any more of my time?”  Fair point.  And a decent reason why a play like The Aliens might not be for everybody.

“You can say it for as long as as loud as you want, and I’ll hold your hand the whole time.”

But I’d like to offer a counterargument.  Because when I first read the play, partway in I had that reaction.  Really, these guys?  I’m going to be spending time with these guys?  Why, Annie Baker, why?  But the further I read, the more I think I got it.  Or got something, anyway.  A lot of those hetero white male privilege stories, they’re about how incapable they are with coping with a changing world.  In many the implication is that the world shouldn’t have to change so much.  But honestly, it does.  The Aliens isn’t wishing we could all go back to a “simpler” time when white dudes just got whatever they wanted and life wasn’t so darn hard (for white dudes).  Annie Baker regularly embraces the misfits, the outcasts, the square pegs in a world of round holes.  She tries to get her audiences to understand the basic humanity of her characters, no matter how strange or different from us they may seem to be on the surface.  She gives the everyday struggles, obstacles and indignities we all face their appropriate weight.  She doesn’t gloss over them or wish them away, she confronts them.  She may not have a solution, but she sees them. And she wants us to see them.

For a host of reasons spoken and unspoken, known and unknown, Jasper and KJ are ill-equipped to deal with the pressures of modern life.  Their one saving grace is their connection to each other.  They revel in their peculiar but strong bond.  They protect each other fiercely, sometimes whether the other person wants it or not.  They quickly go from manipulating Evan, because they can easily mess with the high school kid, to genuinely reaching out for a connection to him.  They could honestly use another friend.  For Evan, it’s an invitation into the mysterious world of adulthood.  All three of them are almost heartbreakingly gleeful and disbelieving when one of the others opens up just a bit more and lets them in.  Maybe Annie Baker’s just saying that, even though they’ve caused a lot of problems over the years, are easy to demonize, and still with all their new hurdles don’t have it all that hard, straight white dudes are human, too.  We’ve all still got to share the planet.  We might as well try and understand one another better.

“I won’t waste away wondering why…”

I’ve got a weakness for damaged, fumbling people - as long as they don’t inflict similar damage on those around them.  Annie Baker is the poet of damaged, fumbling people.  The Aliens is a great, funny, sad little play.  The whole Walking Shadow team does top notch work here, but it you want to see three really amazing nuanced performances, you owe it to yourself to see LaNave, Levin, and Rutledge in action.  I don’t always love or understand the plays that Walking Shadow chooses to do, but with The Aliens, they got me.