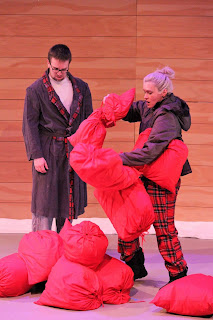 It’s easy to see why people like John Cariani’s play Almost, Maine - why actors like it, why theaters keep producing it, and why people keep going to see it.  It’s an unapologetic romantic comedy that’s in love with the idea of love.  Actually, it’s nine mini-romantic comedies. In the fictitious town of Almost, Maine, nine loosely interrelated stories of couples play themselves out.  Common town locations and familiar names of other characters keep cropping up throughout all nine, but otherwise the stories all take place in their own wintry isolation under the Northern Lights.  But the sprawling population of the town can all be played by just six actors - three men, three women.  They’re almost all two person, male/female scenes - just begging to be done in acting class.  They’re sweet, sometimes bittersweet, one could safely say quirky, often almost adorable.  Which turns out to be both Almost, Maine’s blessing and its curse.

“You gotta love something that makes sense to you, makes you feel good, or what’s the point?”

The brevity of each of the scenes sometimes makes it feel like the script is trying to cram a whole play’s worth of story into just a couple of minutes.  A woman (Amy Vickroy) travels to Maine to see the Northern Lights, invading a stranger’s (Henry Southwick) backyard, in order to make peace with her former husband.  Two ex-lovers (Taylor Evans, Emma McKenzie) unexpectedly bump into one another at a local diner.  A woman in a bad relationship (Tori Ruckle) and a man who can’t feel pain (Mike Hentges) meet in the laundry room of a boarding house.  A long-married couple who’ve drifted apart from one another (McKenzie and Southwick again) are frustrated in trying to rekindle their connection on a date night out skating at the local pond.  A woman (Vickroy again) years too late travels across the country to knock on the door of the man she once left hanging after a marriage proposal - only to be confronted on the front stoop by a man she doesn’t recognize (Evans again).  And that’s only a little over half the play’s running time.  Phew.

“That’s sort of like giving someone a little less air to breathe, every day.”

Some of the other scenes feel more at home and unrushed in this shorter format.  There’s a three part story that bookends the play where a young couple (Hentges and McKenzie again) test the theory that when you’re closest to someone, if you measure all the way around the world in the other direction, you’re actually also the furthest away from that person at the same time.  There’s a whimsical sort of magic realism to a scene where two ex-lovers (Vickroy and Southwick again) meet to return all the love they gave to one another - that love being represented by loads of enormous red bags.  There’s also a tomboy-ish woman (Ruckle again) and her devoted male snowmobiling sidekick (Southwick again) discovering there’s more to men and women together than just riding a snowmobile.  And in a scene punctuated by multiple pratfalls, two male best buds (Evans and Hentges again) come to realize there may be an unexpected reason that all their dates with women turn out so disastrously.  Although now that I say these are the more sketch comedy-esque entries in the evening, I could also make a case that a playwright like Sara Ruhl would make a whole meal of a play out of any of them - red bags of love returned, prat-falling in love, literally traversing the distance of the globe between you and the one you love.

“That’s a planet.  You’re wishing on a planet.”

Director Justin DeLong has assembled a great ensemble here for Mosaic Productions.  Playing multiple characters everyone gets several chances to shine.  The women in particular become quite chameleon-like, disappearing into wildly different characters with costume and hair changes (kudos to costume designer Maggie Myre) that often had me checking the program to make sure I was seeing the same person.  The trouble with a cast this good is that sometimes they’re better than their material.  Just as we in the audience were finally getting to know a character, time’s up.  Just when a story reached a “what the heck is going to happen now?” moment, the script moves on to another set of characters.  No one’s moment of truth really gets to play out.  Cariani has created a host of characters all of whom have history, who seem to have lived before we meet them.  That’s hard to do.  So it’s kind of a shame we don’t get to stick with any of these people for too long.  Of course, it’s always good to leave an audience wanting more, but to constantly frustrate them by never letting anything play out to its conclusion, I’m not sure that’s an equally good thing.

Not to put too fine a point on it, but you can also tell that this script was written by a (probably straight) man.  An argument could be made that all the women characters are emotionally unstable or even mentally ill, while the men are meant to come off as noble, long-suffering, decent fellows.  Yes, some men in Almost, Maine aren’t that nice, but these men are all spoken of, never seen, kept offstage.  The women’s shortcomings are all right out in plain sight.  One hopes it’s just an unintentional side effect of episodic storytelling, but when I started to wonder why the play bothered me, that pattern was a big part of it.  Also, there’s a whole lot of uninvited kissing going on, and with so little time to get to know these people, that constant invasion of each other’s personal space feels doubly transgressive in a way that doesn’t really translate to “romantic.”  Points for tossing a little homoeroticism, however brief, into a largely heterosexual lovefest, though (and to the actors, for really committing to it) (for those of you wondering, for better or worse, no, they don’t kiss - they're too busy falling down).

“Oh, so it’s kind of like the opposite of God.”

One other thing that felt like a production choice rather than something required by the script was the flow of the piece constantly being interrupted by blackouts and scene shifts.  The stage in the James Sewell Ballet Tek Box at the Cowles Center is spacious enough, and the scenes themselves small enough, you could set up two at a time on stage and be able to flow directly from one scene into the next.  We can see the actors moving furniture around, we’re already suspending our disbelief.  We could suspend it a little further and ignore a couple of set pieces, then jump right into another story on the heels of the one that came before on the other side of the stage.  We don’t need that much downtime to shift gears and process what we just saw.  And the many stories and people of the town of Almost, Maine might seem a bit more interconnected if we weren’t segregating  them so deliberately from one another.

“Here I am at the end of the world; there’s nowhere to go.”

Still, the script is clever, and almost unbearably sweet.  The actors have a great time creating all these different people and genuinely seem to get a kick out of sharing the stage with one another in varying combinations.  There’s not really a couple that misfires here, and that’s rare, even if sometimes you wish for their sake that they didn’t have such a strong connection to each other.  Lack of chemistry is not a problem any of this ensemble has.  So if you’re looking for something to warm your heart on a chilly night, the kind of show that makes an audience audibly sigh and applaud between every scene, Almost, Maine is weird little town you should definitely visit. (closes this weekend, Sunday 1/15/17)