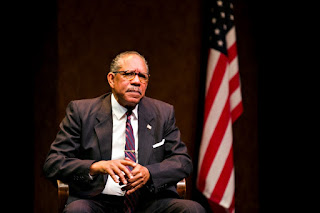 Honestly, if you have an opportunity to see James Craven act in anything, you should go see it.  The man is fantastic.  Right now at Illusion Theater, James Craven is taking on the mantle of the late Justice Thurgood Marshall, the first African-American justice on the United States Supreme Court, and before that a fierce advocate in the courts as a lawyer for one ground-breaking civil rights case after another.  Mostly famously he argued successfully in the Brown vs. Board of Education case before the Supreme Court on which he would one day himself serve.  The Brown case struck down the segregationist policy of “separate but equal” schools for children of different races as a fiction and made school integration the law of the land.  In fact, before joining the bench, Marshall argued 32 cases before the Supreme Court, winning 29 of them.  As judge on the U.S. Court of Appeals, 2nd Circuit, he made 112 rulings, all of which were later upheld by the Supreme Court.  And as U.S. Solicitor General, arguing cases for the government, he won 14 of the 19 cases he presented.  He then served on the Supreme Court for 24 years.

“Equal Justice Under Law - I hope so.”

Thurgood the script, written by George Stevens, Jr. and directed by Illusion’s Executive Producing Director Michael Robins, has all the intelligence and humor, and the amazing personal journey, of Thurgood Marshall himself.  This production is a home-based extension of a tour traveling the state of Minnesota this winter of the same play, with Ellen Fenster in the director’s chair and Neal R. Hazard in the title role.  It’s good of Illusion to give those of us in the Twin Cities a glimpse of the play as well, with Craven embodying Thurgood Marshall.

“If I die, you just prop me up and keep on voting.”

Thurgood Marshall led a remarkable and important life, from his birth as grandson of a former slave, to sitting on the highest court in the United States. James Craven is a remarkable actor, more than suited to a subject of this magnitude.  That’s why I wish Stevens’ script was just a little more adventurous and challenging.

“If Eisenhower had fought the Second World War the way he fought for civil rights, we’d all be speaking German right now.”

Thurgood is a fairly standard treatment of a person’s life on a one-person play format.  It marches through the chronology of Marshall’s life in an almost exclusively linear fashion.  It tries to give everything it covers pretty much equal weight, which has the unfortunate effect of making everything about Marshall seem a little less remarkable.  The play takes the form of Marshall in a lecture hall, and it’s good as far as it goes.  In this context, it just doesn’t have the room to go very far.  It’s hard for a single person and this script, even with audio visual aids, to fully populate the world that Thurgood Marshall grew up in, and then changed for the better.

Still, Thurgood Marshall the man is larger than life, whatever the format, and James Craven is just the man to bring him back to life for us.  If nothing else, it’s sure to inspire you to go learn more about the man, his life and times, for yourself.  So if you get a chance to see Illusion Theater's production of Thurgood, you should. (runs through March 19, 2017)

(James Craven as Thurgood Marshall; photography by Lauren B Photography)