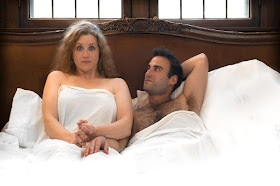 One of the many reasons I love the Fringe - new plays get a chance to shine.  This year, few shine brighter than Summers In Prague from Sidecar Theatre (in collaboration with Chameleon Theatre Circle). It’s a nearly all-female team in charge here, and I don’t think that’s a coincidence.  World premiere script from playwright Deanna Strasse, direction by Kimberly Miller (who I hear we might be losing to Chicago, sigh), and a great performance from Samantha V. Papke, matched by her male co-star Avi Aharoni.  Mom keeps using words like elegant and exquisite when describing the play to others, and she’s not wrong.  I’d also throw in the word lovely.

“I’d rather do things, than have things.”

Given the premise, the thing could easily have gone off the rails in the wrong hands.  Expatriate American Mara (Papke), an English teacher in Europe, saves her pennies for summer travel to Prague each year.  One year she decides to do a little something extra for herself.  She hires a male esccort named Vaclav (Aharoni).  She’s nervous, he sets her at ease, things go well.  So next year, she signs on for more.  This transactional relationship between them slowly becomes something deeper and more real, though the larger reality of the world is never far from the surface in this unusual romantic tale.

“He thinks she doesn’t love him, but it’s just that she got hit by a bus.”

It’s impossible to do justice to the subtleties in the performance and the text here.  You really need to see it for yourself, as it is with any good theatrical production.  And by any standard this is a very good theatrical production, in or outside of the Fringe Festival.  The talents of all the collaborators meet and then elevate each other.  If you want to shake things up a little, take a break from the musicals and the madcap comedies and the concept pieces and the solo shows and the puppets (of all of which, I am also a fan), and just spend an hour with two human beings trying to figure out what love and friendship mean in a complicated world.  That’s Summers In Prague.