Review - The Minotaur or: Amelia Earhart Is Alive And Traveling Through the Underworld - Sheep Theater - Just As Delightfully Weird As It Sounds - 5 stars 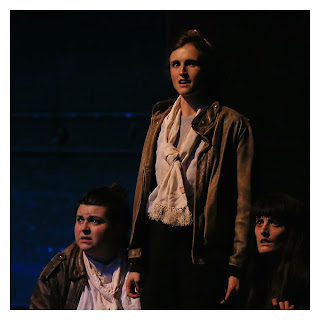 Lately, when I need to be reminded why I still like theater, I’ll go to a Sheep Theater production.  I honestly don’t even need to know or understand what they’re doing before I attend.  If they’re doing it, it’s a fairly safe bet I’m going to end up amused and inspired.  So I’m in luck, and so are you, because they’ve got a show going on right now (and another gearing up as part of the Minnesota Fringe Festival in August).  The current production, making inventive use of the full space at In The Heart of the Beast Puppet and Mask Theater, is The Minotaur or: Amelia Earhart Is Alive And Traveling Through the Underworld.

Famous (and famously missing) pilot Amelia Earhart (Iris Rose Page) has flown into a storm and crashed her plane.  To be fair, her navigator Snook (Madeleine Rowe) did warn her not to do that.  Also to be fair, the storm was actually there for a reason, put there by Poseidon (Joey Hamburger) in fact - to warn people off.  But instead they’ve crashed, and the plane landed on the cage imprisoning the Minotaur (Trevor Simmons) - a monster with the head of a bull and the body of a man.  So now the cage is busted and the Minotaur is free.

“Where would you go if you’d been boxed up most of your life?”
“The bathroom?”

While Poseidon heads off to try and recapture the Minotaur, he tasks Amelia and Snook with going to the Underworld to inform Hades (Michael Rogers) of the Minotaur escape situation.  He assures them that once they deliver the news, Hades can assist them in getting back home.  The first obstacle is getting across the river Styx, because Charon (Madhu Bangalore) requires them to give him a coin if they want a ride in his boat - and they don’t have a coin.

Not to worry, Icarus (Tara Lucchino) shows up and helps Amelia and Snook steal the backup spare boat and head off down the river anyway.  It seems that Minos (Robb Goetzke) has taken Icarus’ father Daedalus (Jacob Mobley) hostage - and naturally, Icarus would like to fix that situation.  Meanwhile, around the edges of things, the Seauthsayer (Meg Bradley) keeps saying vague, ominous, but potentially helpful things, led about on a long leash by Phemus (Tom Schultz).

“We’re not looking for anything.”
“You won’t find it here.”

And there’s the occasional run-in with ravenous hordes of Lost Souls, who are thankfully quite easily distracted by a half-eaten jar of salsa.

Accompanying all this strangeness are comedically earnest meditations on the meaning of life, death, the afterlife, exploration, and the allure of the unknown.  Nearly all the costumes are unexpected, such as Poseidon scurrying around in a T-shirt, pants and a bathrobe, or an ancient guard of the Underworld in denim overalls.  Cheesy special effects make an appearance when someone runs in with an electric fan to give someone windblown hair, or they flip on a strobe light to give a moment some slow motion action.  The set is deceptively simple, the company using two large orange A-frame ladders, and a shorter wooden ladder in varying configurations to conjure up Amelia’s crashed plane, or a boat for the river Styx, or a place to chain up a prisoner, or a particular passage through the mountains of the Underworld.  Other areas at higher levels on the sides of the stage make for unusual places for characters to appear or pass through on their journeys.

The audience actually begins viewing the play up on the stage itself behind a curtain which will later be removed.  The actors in the opening scene maneuver well through the audience that encircles them.  It’s as if we aren’t even there.  Each audience member is given a coin when they get their program, which they all later must pass on to Charon in order to be allowed to pass down off the stage and “take a seat in the Underworld” to watch the rest of the show.  There’s also a great sight gag during Icarus’ journey with Amelia and Snook where they run into Sisyphus and… (on second thought, I won’t spoil it for you).

Joey Hamburger, Iris Rose Page, and Michael Rogers have written the kind of smart, funny, endearingly oddball script that Sheep Theater is known for, and Michael Torsch directs the large, talented ensemble with his usual skill and aplomb.  Page’s performance as Amelia is particularly winning.  It’s a great character to build a show around, and it makes me wish that the title were reversed (partly because there’s another show called The Minotaur, and Sheep’s version is better, so I don’t want them getting confused; partly because, though the beast is pivotal to the show, it’s really Amelia’s story - so, Amelia Earhart Is Alive And Traveling Through the Underworld, or: The Minotaur) (or perhaps Amelia Earhart and The Minotaur’s Excellent Adventure).  I’d be remiss if I didn’t mention the wonderful original music from company regular John Hilsen (assisted at times by the Minotaur on drums) and the great work Phil Uttech did with the lighting design in a large and incredibly variable playing space (cool backlighting every now and then, too, again for the Minotaur).

Sheep Theater just makes me feel better about theater - seeing theater, creating theater, just theater in general.  The Minotaur or: Amelia Earhart Is Alive And Traveling Through the Underworld is yet another great example of that.  It’s just a heck of lot of fun to watch.  Go see it.  Treat yourself.  (runs through June 23, 2018 at In The Heart of the Beast Puppet and Mask Theater)
5 stars - Very Highly Recommended

[left to right: Snook (Madeleine Rowe), Amelia (Iris Rose Page) and Icarus (Tara Lucchino) try to figure out their next move on a journey through the Underworld; photographer: Scott Pakudaitis]