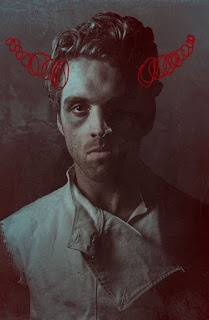 When a play loses me, it almost never gets me back.  But Theatre Pro Rata’s production of Anna Ziegler’s script The Minotaur reeled me back in after letting me disengage from the story for a bit, making me really care about the play’s closing sequence of scenes, so color me impressed.  This probably has just as much, if not more, to do with the work of director Amber Bjork and her team of actors and designers as it does with Ziegler’s script but however it happened, it was a little bit of theater magic for which I was very grateful.

The Minotaur is a modern reimagining of the ancient myth, but taking into account that the monster is half human as well as half bull.  So the Minotaur (Kip Dooley) is half brother to the princess Ariadne (Stanzi D. Schalter).  (Their mother and her husband the king ended up running afoul of the gods - and so a curse found mom developing a thing for one of the livestock, these things happen.) Ariadne tries to be a good sister, and the Minotaur tries to be a patient brother, but neither of them is entirely successful.  The Minotaur is housed in a maze beneath the palace.

In order to keep the monster in check, a neighboring kingdom is under obligation to send 7 young men and 7 young women each year as a sacrifice (aka, supper). To put a stop to this practice, one of the neighboring kingdom’s heroes, Theseus (Derek Meyer), offers to go along with the sacrificial group and do battle with the monster.  Ariadne falls in love with Theseus (as you do) and agrees to help him defeat the Minotaur.  There’s a chorus made up of a priest (Brian Columbus), a rabbi (Noe Tallen), and a lawyer (Mike Tober) who take care of a lot of the narrative and expositional duties.  The night I saw it, there was also a trio of sign language interpreters up front - and they were so well-integrated into the fun of the action that I almost feel bad for any performance that doesn’t have them.  It added a very welcome extra level of playfulness and camaraderie to the evening.

Half of Julia Carlis’ imposing set design takes its cue from the sails of Theseus’ ship, the other half of the set consists of enormous macrame hangings that dwarf the human actors onstage (a cheeky nod to the ball of yarn that will allow Theseus to navigate the maze and then return). The stark lighting and ominous sound designs (from John Kirchofer and Jacob M. Davis, respectively) help to reinforce the sense of scale in the legend housed on such a set.  And Mandi Johnson’s costumes, particularly that of the Minotaur himself (clad all in white, with a wire cage of a horned headdress to go over his human head) complete the picture of an otherworldly tale that has hints of a modern feel to poke at the old story.

“Falling in love isn’t a skill.  It’s not something you can be good at.”

Ziegler’s a gifted and award-winning playwright with quite a resume, and it’s her skill in part that both loses me and brings me back as an audience member.  A lot of writers (myself included) are bewitched by old myths, legends and fairy tales.  We can’t resist reviving them and putting our own spin on them.  If we’re clever and have also done our research, we can really go down the rabbit hole (or get willingly lost in the maze, if you’ll pardon the metaphor) - and in such moments, we can forget and leave our audience behind.  And a lot of the time, we’re having so much fun, we don’t really care if we’ve lost them.  Word play, inventive twists, well-played metaphorical parallels - they’re ways writers can get stuck up their own a**, and unless they decide they want to return to speaking with the audience that they brought this far, the story and characters can get completely derailed.

Ariadne and Theseus are portrayed as self-involved and privileged, perhaps even a bit dim (certainly naive).  The chorus’ attitude of superiority and cleverness gets off-putting a lot sooner than the author might think they do.  The audience is more than ready for the story to mutiny against the storytellers and take things in a new direction.  The character of the Minotaur gets so much attention, and so much nuance, that an audience is also more than willing to continue watching the monster, grateful every time it returns to the stage.

“Name one thing you’ve done lately that feels like a surprise.”

The whole cast turns in solid performances.  That annoying chorus I spoke of, not the actors’ fault.  The trio of Columbus, Tallen and Tober are just enthusiastically going exactly where the playwright wants them to go.  Ditto for Meyer and Schalter as Theseus and Ariadne.  The saving grace of both the script and the performances is their conflicted feelings about the nature of their mission to vanquish the monster, and its consequences.  Their late in the action conversion, and the reappearance of the minotaur in the play’s closing sequence, is what pulled me back in.  Kip Dooley’s eyes, accented with makeup under his wire bull’s head, almost deserve their own review.  The Minotaur’s gaze was a hard one to shake, and never let you forget the human being inside the monster.

“Forgo all the adventures and the tragedies.”

The strength of The Minotaur is that it goes in with its own mission to undo some of the inequities of the ancient tale for a modern audience: the fact that the story is way too tilted in favor of the male hero, that the female lead always wrongfully ends up getting the shaft, and no one bothers to look at the minotaur as anything other than a monster. It starts out trying to correct these imbalances, and does its best work when it’s equally a story of three and not just one or the other (or the other).

“I do not punish myself for being hungry.  And we have the same hunger.”

I don’t want to spoil anything, so I’m going to leave it here.  I should know by now that when Theatre Pro Rata chooses a script, even if it loses me for a little bit, there’s something that’s going to turn the whole thing around before the night is over.  In fact, I found myself sitting there in the audience, willing it to happen. “Come on, don’t let me down now.  Pull out of the dive and bring it in for a landing.”  And land The Minotaur does.  You should head into the maze and see for yourself. (runs through October 22, 2017 on the Crane Theater main stage)