Even if I can't get to show myself, I sometimes give a little shout out to help other know it's out there, so maybe they can go in my stead...

Anybody want to help put on a play? 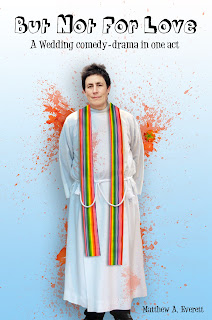 This is a little unusual but it might end up being more efficient.  So since I've got the outlet, I might as well give it a try.

We're looking for collaborative theater partners to help mount of a production of a play about gay marriage this October.  This is being timed to hit the stage just prior to the big election day in November (11/6/2012) where Minnesota decides whether the definition of heterosexual marriage shall be enshrined in our state constitution, doubling down on laws we already have on the books barring gay marriage.

The push behind this project is the thought that, politics being what they are, the conversational atmosphere around this topic is going to be fairly toxic come the final weeks of campaigning.  It seemed like a good idea to put a play out there that could provide entertainment with some laughs, even a happy ending, to boost morale and rally the troops to get out there and vote to defeat this amendment.

The play (yes, one of mine) is called But Not For Love and it was originally commissioned and produced back in 2006 by Allegheny College in Pennsylvania.  Round about this time last year, the Renegade Theater Company in Los Angeles picked it up for production, given their own Prop. 8 woes around the subject.

The play's never been done in Minnesota, and it felt like if any time was right for a play like this, it'd be right now.  (I keep going back and forth personally on whether the fact that it's five and a half years old and still relevant is a good thing or a depressing thing.)  A synopsis is at the end of this post.

The Flowershop Project, with whom I've collaborated on a couple of shows in recent years, is committed to getting this play out in front of the public.  The challenge is that right now they're going through personnel changes and restructuring, so they don't have as many hands to do the work as they normally would.  Hence the call for partners.

Flowershop is already outlining a budget and brainstorming on fundraising.  (In fact, we're meeting tomorrow morning to check in on where we are, and what still needs doing.)  They also have ready access to rehearsal space.  Those are really the only things, as I write this, that are in hand.  We haven't settled on a director, designers, actors, or a venue.  Right now we're casting our net wide and seeing what we catch.  Theater being what it is, if you're diligent enough, the right partners will appear.  This blog post is just another effort at due diligence on my part.

I've already begun speaking to several folks individually, and the search and those talks continue.  What I've found is that even if someone is currently already committed to other projects in that time frame, they're very sympathetic, and have suggestions of still other people with whom I should be talking.  The larger the network we tap into to spread the word and get this thing done, the better.

So it's also a call for suggestions.  If you might be able to help, great.  Let us know.  If you're unable to help personally, but know of someone who would be excited by the project, send their name my way.

My email is mail AT matthewaeverett DOT com, and you can also find me on twitter @MatthewAEverett

Synopsis - But Not For Love

A double wedding. Two couples - one straight, one gay - divided over what their ceremony should mean to themselves or anyone else. A lovelorn lady minister who has a secret of her own. A policeman torn between the picket line outside the church and the ceremony he’s obliged to protect. A protester with ties to the bride and the grooms who’s willing to throw rocks through stained glass windows to keep the vows from taking place.

Eleanor and Ephram, sister and brother, are both getting married on the same day. And they’re each getting married to a man. With protesters, policemen and a TV news crew outside the church, inside the couples are split over what their day and their ceremony should mean, to themselves or anyone else.

Patrick, Ephram’s groom, agrees with Eleanor that they all need to make a statement by getting married. But Roland, Eleanor’s groom, and Ephram both just want a simple ceremony and a quiet day.

Another attraction begins to blossom between the female minister, known as the Duchess, and one of the policemen standing guard over the church, Duke. But a secret from the Duchess’ past may prove more of an obstacle than the two of them can overcome.

Meanwhile, outside among the protesters, Patrick’s younger brother Jacob hurls a rock through the stained glass window in an effort to keep the wedding from taking place. When the rock draws blood, one couple may not end up getting married today, or any other day.

Men have died from time to time,
And worms have eaten them,
But not for love.
- As You Like It, William Shakespeare