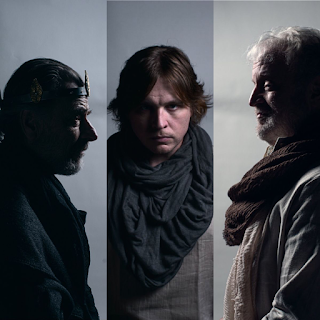 Given how captivated the movies have been with Shakespeare’s Henry IV, parts 1 and 2 over the years - from Orson Welles’ Chimes At Midnight to Gus Van Sant’s My Own Private Idaho - and considering how much damn Shakespeare I’ve seen over the years, you’d think I’d have run into Henry IV, either part, on stage by now, but nope.  So Theatre Coup d’Etat’s Rogue Prince (which I keep accidentally typing as Rouge Prince, which would be a completely different tale), provides a nice combo platter of both the Henry IVs plus a little sprinkling of Henry V to top things off and catch me up.  Should you see Rogue Prince?  I'd say yes.  It’s not perfect, but there are some great performances in it, and as with most Shakespeare, there’s some amazing material in it as well.

The adaptation by Gary Briggle (who also co-directs alongside Wendy Lehr) takes its cue from the Welles version, refocusing the story away from the larger “fate of kingdoms” framework, and zeroing in on Prince Hal (James Napoleon Stone) (who will eventually become the title character of Henry V) and his divided heart, pulled in one direction by his actual father, title character of the two King Henry IVs (Bruce Bohne), and his surrogate father (and bad influence) Sir John Falstaff (Gary Briggle, are you noticing a theme?). While father King Henry IV is trying to quell a rebellion spurred on by the righteous anger of Henry Percy (aka Hotspur) (Ben Shaw), and the treachery of the Earl of Worcester (Meg Bradley), Prince Hal is hitting the bars and the brothels with his trusty sidekick Poins (Damian Leverett) and Falstaff’s band of lowlifes and misfits (Corey de Dannan, Kaylyn Forkey, Anna Leverett, Don Maloney, Kjer Whiting, plus Meg Bradley and Ben Shaw - again).  Who will win on the literal battlefield, and who will win the battle for the soul of Prince Hal?  Those two conflicts turn out to be more entwined than you’d think.

“Can no man tell me of my unthrifty son?”

Coup d’Etat’s production isn’t just economical in the way it blends the two(ish) plays together into one full-length evening’s narrative, they’re also very economical in handling the sprawling cast of characters.  Seven members of the ensemble (Bradley, de Dannan, Forkey, both the Leveretts, Shaw, and Whiting) cover more than two dozen of the characters, so some aren’t just doing double duty, they get all the way up to sextuple duty.  Now the danger of this, if you’re not careful, is what I call “costume change acting” - where the actor maybe doesn’t make the different characters on their roster all that distinct from one another and so the costume change is doing a lot of the heavy lifting in terms of making the audience realize that the actor is a new person now.  Most of the cast is pretty good at avoiding this pitfall, and in fact, the real standouts in the ensemble are the ones who establish multiple characters with the greatest skill.

“A plague upon all cowards.  There live not three good men unhanged in all England.”

Meg Bradley couldn’t be more different as the treacherous Worcester, and the kindly but easily duped Dame Quickly, proprietress of Falstaff’s favorite tavern/brothel.  Ben Shaw goes from almost stealing the first act as the battle-hungry young Hotspur, to almost unrecognizable as the stoop-shouldered ancient Justice Shallow.  I actually had to double-check with the program to be sure it was the same actress, Anna Leverett, portraying both Hotspur’s wife Lady Percy, and the prostitute Doll Tearsheet, I honestly wasn’t sure she was the same person.  Likewise, even though Damien Leverett was physically recognizable as both the low-born trickster Poins, and Prince Hal’s younger brother (and Henry IV’s more dutiful son) Prince John, the way the actor physically carried himself in each role, down to the way his face was when at rest, was remarkably subtle and impressive work.

“Time has come to end the one of us.”

The triangle of a son torn between two fathers shows off all three actors well. Bruce Bohne’s tortured King Henry IV has all the regal bearing his son will, he hopes, someday acquire.  James Napoleon Stone does a fine job making Prince Hal’s transition from barhopping ne’er-do-well to warrior to leader of the nation seem smooth and gradual (even inevitable), rather than abrupt.  Gary Briggle is clearly having a ball as the dissolute Falstaff, diving into all the different sides of the role with real relish.

“The better part of valor is discretion.”

But Falstaff’s the problem here - not the actor, but the character.  Even though I hadn’t seen either of the Henry IVs previously (or the The Merry Wives of Windsor, in which Shakespeare brought Falstaff back from the dead, rumor has it, to please Queen Elizabeth I, who insisted on seeing the character again in a new play), the idea of Falstaff as a character (and character type) still looms so large in the collective public conscious (ok, for theater and Shakespeare nerds) that I had expectations.  Not that Falstaff would be an upstanding character with lots of redeemable qualities, I wasn’t that naive.  But I didn’t expect him to be horrible.

“Uneasy lies the head that wears the crown.”

And he gets off easy in this adaptation.  In reviewing the full Henry IVs, I found out he does worse things than we even get to see in this version.  Honestly, maybe the current occupant of the White House has ruined liars for me but Falstaff’s such a bad liar, and a petty, abusive, self-serving, mean-spirited one, that I don’t find him a charming but lovable rascal.  I just think he’s a jerk.  I feel sorry for people like Dame Quickly and Doll Tearsheet who are constantly taken in and disappointed by him.  And again, this isn’t Briggle’s doing.  He didn’t write it, he just adapted it.  He’s doing a great job being just the sort of insufferable a**hole that Shakespeare put on paper.  I understand why a bunch of the other male characters in the play like him, though that doesn’t speak well of them either.  Falstaff isn’t without his own brand of charisma, it’s just not in service of a very nice human being.  Your mileage may vary.  The old goat didn’t get to be a beloved character of classical theater for nothing.  I just couldn’t stand the bastard.  And since his misadventures are such a huge chunk of the real estate of the play, it was sometimes hard for me to stay engaged and not think, “Oh not this guy again.” A lot.

“Call for music in the other room.”

Directors Briggle and Lehr use the basement space of the Calvary Baptist Church very well, setting the scenes in the royal court incorporating the actual stage space, including bringing the red curtain in and out to punctuate scene shifts (and give us a little comedy action in act two with heads popping out from behind them).  The audience is arranged in a U-shape down on the spacious floor space facing the stage, leaving a big open central area for setting up the bars where many of the characters spend their time, as well as space for battles (with some terrifying looking swords - everyone’s got a front row seat to the fighting choreographed by Adam Scarpello).  Mark Kieffer does a great job lighting an unconventional space.  Forest Godfrey’s sound design helps open up the world beyond the semi-circle of the audience and light.  Chelsea Wren Hanvy’s costume design gets us into another era, and helps populate the world with multiple characters that outnumber the actors.  Kudos to stage manager Sara Wolf for juggling all the multiple elements (and entrances and exits) of this world and keeping it moving.  The British accents threw me at first, but it is England after all, so thanks to dialect coach Jim Ahrens.  And when Doll decides to climb on top of Falstaff, I’m grateful there’s an intimacy coach on hand so thanks as well to Emma Van Vactor-Lee.

“Presume not I’m the thing I was.”

And while we’re on the subject of intimacy, a tip of the hat to Coup d’Etat for a production that sexually objectifies the men rather than the women for change.  The ladies get to keep their clothes while there are scenes in both acts featuring male characters spending much of their time shirtless.  And since they knew it was coming, the actors involved clearly put in the work to get ready.  The gay friend who accompanied me thanks you.  And I thank you.  (While I’m throwing around gender-related compliments, kudos for the cross-gender casting of so many of the smaller traditionally male roles with female actors. It gave a nice balance to the ensemble as a whole.)

“A good plot, good friends, and full of expectation.”

I’m sure those more familiar with the two parts of Henry IV will have their opinions on what was kept and what was cut, and in the current configuration it plays more like a prequel to Henry V than a story focused on his predecessor.  But Rogue Prince is a very accessible introduction to the material, and as previously stated, some great performances amidst what are sure to be polarizing characters and relationships.  A cure if you need a Shakespeare fix, full of heart and brains and guts all around (with the occasional torso thrown in for good measure).