Minnesota Fringe Festival - Bidgood to BidGREAT: Bumps and Blunders on the Boulevard to Brilliance - What Happened?! Productions - Laura goes solo

There are three good options in the Loring area for shows for the last slot (10pm, Thursday 8/1) on opening night of Fringe as we make our way back home for the night.

We could stop off at the Theater Garage and see my friend Nick James in the cast of Consequences of Kissing Dragons.

The mischievous Fringe-goer in me almost convinced mom to try out Professor Hotrail and the Time-Traveling Meth Lab at the Music Box because, well, c'mon, there's a puppet, a time-traveling meth lab, and Jesus all in the same show.  That's like a Fringe triple play.  (Fun Fringe Fact: when I typed "meth" into the search engine on the Fringe website, 12 shows came up.)

But we decided to stick a little closer to home at the Women's Club and catch the opening night of our perennial Fringe favorite Laura Bidgood (going solo this year) with Bidgood to BidGREAT: Bumps and Blunders on the Boulevard to Brilliance.

Where's her other half Curt Lund?  She addresses that (amusingly, of course) in her Fringe-For-All preview video (hint: school).

I got to see Laura do a variation on the scared little girl story at both Fringe-For-All and Tim Uren's Ghoulish Delights Fringe preview showcase.  I know the Fringe-For-All has time limits for a super good reason (we artists do go on if someone doesn't stop us), but I missed the loosey-goosey atmosphere at Ghoulish Delights.  The story actually didn't last that much longer, and Laura, as always, knows how to work a crowd, so it was fun to watch her work her spoken word/storytelling magic.  It's why mom and I are looking forward to her show, and why it's a perfect way to cap off our first day of Fringing.
Posted by Matthew at 7/31/2013 12:31:00 PM No comments:
Labels: Fringe Archives 2013, Fringe blogging, Fringe Top 10/Top 20 Returnees - 2007

One of mom's Fringe buddies we always have to see in action each year is phillip low, and this year it's super easy: he's acting in two shows and he wrote three.  There's a little overlap, so he only has a total of four with his stamp on them, but that seems like plenty.

The Concept of Anxiety at HUGE is the Maximum Verbosity offering for the year - which means it's phillip performing his own material, which seems like the full "low combo pack," so we opted for seeing that first, since it was happening opening night and we're at HUGE for the first part of the night anyway.  The stars aligned.  Here's their video trailer...

phillip's not going solo this time.  He has his partner in crime Elizabeth Byrd performing with him this year.  I saw them do a preview bit at Tim Uren's Ghoulish Delights Fringe preview evening and it was just the kind of word-playing neurotic fun I anticipated.  phillip's mind is always running a mile or so ahead of mine, but it keeps my brain limber to have a show I need to work a little to keep up with, even while I'm giggling at the jokes.  Macabre jokes, but jokes all the same.  And anyone that can somehow meld together the Da Da art movement with the shark theme from the movie Jaws is always OK in my book.

His other shows are as follows - he wrote and directed a scene for Fringe Orphans 2: Electric Boogaloo, he's acting in The Diamond Lens for Hardcover Theater, and he wrote Launcelot and Guenever for Six Elements Theater.  Phew.

What's not to like about "Two physicists race to solve the mysteries of our time, but end up waiting around and eating snacks. A musical about dark matter, exoplanets and a grapefruit."

The Unknown Matters is labeled as Musical Theater with tags for physical theater/clowning, sci-fi/mystery/horror, and (speaking of horror) audience participation (just kidding, screw the fourth wall, bring it on).

Honestly, my pal Mark Sweeney is the brains behind this one, so I was sold on that alone.  He's got Katie Bradley and Izzy Waid involved as well, and I've liked a lot of things I've seen them in as well over the years, in and out of the Fringe.

Plus, their preview at the second Fringe For All this year was utterly charming (and ballsy).  Seriously, to walk out on stage with a ukelele and just stand there and sing a quirky little ballad for three minutes, completely out of context, and trust that it's gonna sell people, that takes guts.  And the lyrics intrigued me -
"We are not lost, we are not found"
"Write this all down and hope that it stays/Someone's going to read this one of these days"
"Time isn't after us, time isn't over us"

Check out the video for yourself.

Mom and I saw Mark's Robo-Homa! in the Fringe a  couple of years back, and even though this musical doesn't promise robots singing show tunes, I'm still sure we'll have a good time. 7pm, HUGE Theater, Thursday, August 1
Posted by Matthew at 7/31/2013 06:02:00 AM No comments:
Labels: Fringe Archives 2013, Fringe blogging, Fringe Top 10

First slot in the Fringe is hard, particularly for a new play.  The fact that A Certain Age has music helps but since it's labeled a comedy and not a musical people could miss that selling point.  I have to admit I don't know either of the two ladies at the center of this play or even the playwright.  Neither mom nor I is even technically a middle-aged woman, so the subject matter of the evening is not the draw.

What brings me (and mom) to this one is the director, Elena Giannetti.  Elena as an actor was part of one of the early public readings of my very first script to get produced here in Minneapolis (we won't go into how long ago that was - I was not yet a middle-aged woman then).

Elena and her husband (also part of that early reading) have always been loyal supporters of my work, and in return I go and see as many of Elena's plays as I can.  She's recently branched out into directing, and from the way she describes the process on this project, it seems like it's been a great collaborative process and they're very proud of the end result.

So, a series of vignettes with original songs thrown in, and I see just now on perusing their show page, they've drafted another talented fellow I do know - Richard Weber, who was part of the ensemble for the latest Project 515 tour I scripted.  Yet another reason to feel we're in good hands here.

I had to look up Bon Chien of course, because I'm a philistine.  It's French for "good dog." Take that how you will.

And as luck would have it, this show is at HUGE Theater in Uptown and the next two shows at HUGE are also ones mom and I would very much like to see, so we get to stay put.
Posted by Matthew at 7/30/2013 11:57:00 AM No comments:
Labels: Fringe Archives 2013, Fringe blogging, Fringe Top 20 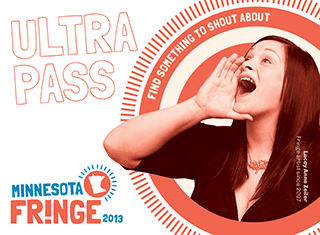 Though she may not look it or act it, my mom is 75 years old.  She is also a hardcore Fringer who wants to get the most out of her UltraPass.  And her son (that'd be me) has a show of his own in the Fringe this year.  All of which makes mom's annual Fringe pilgrimage out to visit me in the Minnesota just a bit more logistically tricky than it was last year.

As much as I'd like to think that I can just drag mom around behind me wherever I go, I vividly remember a time a few years back when we were hoofing it from the Rarig Center over to one of the stages at Augsburg and I was more than a little afraid that she might keel over on me.  So, if mom wants to get in her usual 30 shows in six days and still remain standing, I need to get creative in plotting out how we get around, or rather how to see a bunch of good shows without moving around all that much.  Thankfully, it looks like there's a ton of good Fringe shows this year (as usual), so we've got options.

My play, How To Date A Werewolf (or, Lonesome, Wild and Blue), has three shows crammed into opening weekend of the Fringe (Friday at 10pm, Saturday and Sunday both at 4pm).  We're at TRP (Theater in the Round Players), so that's going to tie us down to the West Bank hub of theaters for much of those three days.  I'm helping with load in and load out.  While that's not entirely necessary, since the show's simple, I like to have an extra set of hands at the ready, in case they're needed.  And if it makes settling in easier, so the actors have some more time to get into character (perhaps even relax), so much the better.

Besides, mom wants to see the show as much as she can, and so do I, and there's no late seating, even for us on my own show, so there you are.

That also means that Thursday, Monday and Tuesday when she's also here, we are free to roam over to Uptown or Downtown or Loring instead.  Loring is kind of perfect because that's where I live.  So we could literally just walk to the Women's Club or Red Eye or the Music Box and not have to worry about driving about or parking.