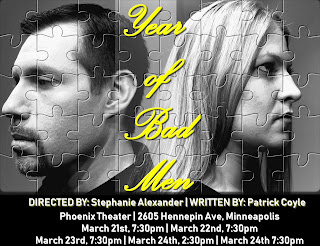 If you haven’t seen a play written by Patrick Coyle (and since he’s been doing most of his writing work in independent film in recent years - Detective Fiction, Into Temptation, and Public Domain - his plays have been harder to find), the new theater company Life-Sized Meme has a treat for you.  Coyle’s latest play, Year of Bad Men, described as a femme noir, is playing this weekend at the Phoenix Theater.  I’ll be honest, Patrick Coyle is a friend of mine, and I’ve been a fan of his work as both a writer and an actor for a long time, so consider the source.  But there’s a reason I’m such a fan - the work is great.  And that talent is on full display in Year of Bad Men.

Life-Sized Meme put out a call for scripts and got over 300 of them from quite literally all over the world.  The reason they chose Coyle’s play isn’t because he’s local, it’s because the play’s so good.  And Life-Sized Meme has put the play front and center in the production.  I know that sounds like a weird thing to say (don’t all productions put the script front and center?) - but sometimes a theater company will get so involved in its vision for the production that the play can get lost.  Not so here.  Director Stephanie Alexander and her delightful team of actors really dig into Coyle’s script and enjoy themselves.  The plot is twisty and funny and deeply weird, but it’s not just a jigsaw puzzle.  There are human beings bumping into one another here that have major issues and conflicted emotions that make the ideas of justice and escape and forgiveness and revenge seem very dangerous.  Year of Bad Men is the kind of play where it’s fun just to strap in and hang on for the ride.

“You’re not wanted by the law, are you?”
“I’m a middle school history teacher.”

That ride centers on Tommy Gallagher (Adam Harfield) and the two women who suddenly appear in his life with very different agendas - Mary Sullivan (Stephanie Coffield) and Kim Porter (Haley Hubbard).  Mary is a middle school history teacher with a doozy of a secret who sublets an apartment from touring musician Jason Grant (William Bridger Adkison), right across the street from Tommy so she can watch him, and he can see her as well.  Mary’s aggressive (and successful) campaign to pull Tommy into a torrid physical relationship gets him to set his moving plans aside and stay put for a while.  Which is handy for Kim, because she’s also trying to track Tommy down - turns out he’s her biological father.  Kim enlists the aid of a friendly gay barista named Henry Shier (Adri Mehra), who gives her a couch to sleep on, and tips on how to also land a job at the coffee shop working for Bobby Clayton (Al Fiene).  All the activity in her buildings makes manager Samantha Rose (Ellen Apel) curious enough to call in her private investigator friend Shelly Wasserman (Heidi Ricks) to learn more about Tommy and Mary.  This results in one of the more hilarious info dumps of exposition in recent memory at the top of act two.

“Do you believe people can change?”
“I haven’t seen much evidence of that in my life.”

The danger of these kind of plot-twist-heavy sorts of stories, full of secrets and lies, is that the plot can sometimes overwhelm the characters.  Thanks to the script, a great group of actors, and sure-handed direction, Year of Bad Men manages to avoid this pitfall nearly all the time.   They also all manage the tricky balancing act of keeping the sense of dread alive at the same time hanging out with these characters is also a lot of fun.  And the story isn’t satisfied with just serving up surprises at the end - it wants you to feel for the characters as well.

“The next day I cleaned my car, and forgot about her.”

That said, the character of Kim can get a little lost in the weeds sometimes - this seems to be a script rather than an acting issue.  While I appreciate the inclusion of the gay character of Henry, his boyfriend is conveniently off stage and out of the country, so it’s the heterosexuals that get all the sex, and the headaches that come with it.  Much of the time Henry and coffee shop owner Bobby serve a lot of the same functions in Kim’s story, so I wonder about the necessity for both of them.  One or the other, but not both, might give Kim’s character a little more room to breathe.  And a lot of Kim’s subterfuge seems disconnected from her mission, unlike Mary’s.  Again, less stuff layered on top of Kim’s story might have given the emotional center of her mission more space to take on the weight it deserves.

“I will never ever lie to you, on one condition.  You never ask me any questions.”

Also, as a new company that clearly values new plays and living (even local) writers, just a tip for Life-Sized Meme: the playwright gets listed before the director.  Take a look at the websites and programs of nearly any theater in town - large or small.  Playwrights - female or male, living or dead - get listed after the title, then the director.  Because, as Life-Sized Meme knows, without a writer, you don’t have a script (unless it’s a company-created work, and that’s a whole other can of worms).  It’s both a little thing, and not a little thing.  (Also, inviting the writer to a couple of rehearsals, particularly at the beginning, can help in unexpected ways - like getting that marijuana/potpourri joke to land better and sound deliberate rather than like a mispronunciation.)

Shout-out to the lighting designer Mary “Poff” Southern and sound designer Taylor Jedlinski, who along with the tireless and speedy work from the stage management/run crew team of Jason Paul Gaarder, Matthew Pitts, and Kya Fischer, keep the action moving smoothly among the play’s many locations (which is no small miracle).  The light through Mary’s window is particularly evocative, and director Alexander’s staging makes what could possibly be a confusing set-up physically instead very easy to follow and understand.  (The magic of theater.)

Year of Bad Men is an entertaining play done very, very well.  I’m already looking forward to more from Patrick Coyle, and Life-Sized Meme.  Catch this one while you can, one weekend only.  Final three performances are tonight, Friday, March 23 at 7:30pm, and two shows on Saturday, March 24th, 2:30pm and 7:30pm, at the Phoenix Theater.  (Oh, and if you walk in a little late and there’s some Bollywood-inspired improv comedy going on, don’t worry, you’re in the right place.  Life-Sized Meme called in Bollyprov to be an opening act.)