Review - Rabbit Hole - Theatre in the Round Players - 5 stars 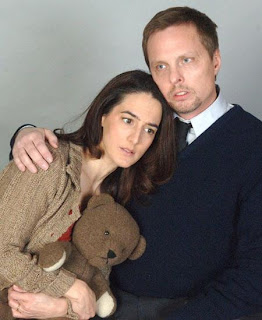 A dog runs into the street.  A child runs after the dog.  A car swerves to avoid the dog and ends up hitting the child by accident instead, killing them.

How do you deal with that - if you're the child's mother, or father, or aunt, or grandmother?  Or the person driving the car?

Some people tell jokes.  Some people write.  Some try to relate it to their own experience.  Some reach out to others.  Some shut other people out.  Everyone finds a way to blame themselves while at the same time reassuring everyone else trying to take the blame that the accident is nobody's fault.  Ultimately you have to hold onto something or you go crazy.

That's Rabbit Hole, David Lindsay-Abaire's Pulitzer Prize-winning drama (with a big dose of unexpected laughter), currently running as Theatre In The Round Players' 500th production.  I'm always pleasantly surprised by Rabbit Hole.  Even on nights when I wonder whether I'll be in the mood for a tale like this, I've always forgotten just enough from the last time I saw it to find myself getting drawn in all over again.  The humor and the humanity and the open-ended question of "what happens next?" grab me every time.

"All those good-looking people falling out of the sky like that."

It's eight months after the accident and parents Becca (Elena Giannetti) and Howie (Ron Ravensborg) are trying their best to adjust to life without their young son Danny.  The dog has been shipped off to live with Becca's peculiar mother Nat (Linda Sue Anderson), not your normal kindly grandmother figure by a long shot.  The dog's getting fat, and not in a good way, which is working Howie's last nerve.  Meanwhile, Becca's flighty sister Izzy (Rachel Finch) has discovered she's pregnant, between jobs, and the prospective father is a musician.  And Jason (Kenny Martin II), the young man behind the wheel of the car that hit Danny, keeps trying to contact the family, first by mail, and then by showing up on their doorstep.

"Maybe he eats too much because he feels punished.  That's what I do."

Performances are everything with a production of Rabbit Hole and director David Coral has gotten five great ones out of this cast.  A production can go too wacky or go too dark.  It's hard to walk that fine line that's a mix of the two, particularly when the script offers up some characters that lean hard one way (Becca and Howie and Jason, dramatic) and some that lean hard in the opposite direction (Izzy and Nat, more toward the comedic end of the scale).  Here we've got the right mix of actors, all holding hands and walking that fine line together.

"Quick and clean like a band-aid, otherwise we'll never get through it."

It's the little things that get you in Rabbit Hole, and this production of Rabbit Hole in particular.  Little choices about character, like the way Becca always rinses things in the sink before she puts them in the dishwasher but Howie puts everything right in the machine.  For Becca, if everything is done just so, life won't slip off the rails any more than it already has.  For Howie, there are more important things in life than spotless household precision.  It's never spoken about, but seeing it happen over and over again still worms its way into your brain.

Little moments of sound in Inna Skogerboe's design - like the noise of a buzzer on a the dryer offstage, signaling the clothes are done.  The way it's positioned, the way it's muffled, the truth of the sound makes the rest of house out in the dark offstage seem more real.  I almost thought I'd imagined it, until Becca left to get the load of clothes.

"Only people who don't have kids give gifts like this."

Little things about the environment on stage designed by Peter W. Mitchell - like the way Danny's childhood bedroom has a floor that's a starry sky, and the way the indigo blue of the night sky leaks into the normal floor of the rest of the house.  Also, how the configuration of the space requires half the audience to walk through Danny's bedroom to get to their seats.  It gave me the willies immediately.  By intermission, everyone was in on the significance, many of them walking gingerly past the bed to get refreshments.

Little bursts of light like the tiny pool of illumination at the end, the finishing touch on A. Camille Holthaus' design, forcing us to watch two characters take hands - tentatively, uncertainly, hopefully.  It takes until the final seconds, but we get the happy ending for which none of us dared hope.

Little things that end up being huge, like the fact that there are no traditional scene shifts.  A scene ends, but characters remain and continue with their day as music plays and lights transform the space.  The things that need to change from one scene to the next happen almost completely in full view of the audience.  So we don't get a chance to check out of the story.  These characters are always present with us.  They remove a child's drawings from the refrigerator door and pack them away in a plastic bag.  We can't take our eyes off of them because we don't have any idea what they're going to do next, where the story is heading.  The new scene emerges from the remnants of the old.   It's not rushed or forced.  The story has no desire to hide from us.  It wants us to keep watching.  The cumulative effect of that is quite powerful.

"Even the most unlikely events have to take place somewhere."

Elena Gianetti and Ron Ravensborg are extremely compelling as two parents grieving in very different ways.  Ravensborg's Howie is a man trying to hold it together but unable to completely master his emotions.  Frustration at being unable to reach his wife at the same time the last vestiges of his son feel like they're slipping away means that Howie will often blurt out exactly what he's thinking.  This may, of course, be the last thing anyone wants to hear.  In contrast, Gianetti's Becca has shut down.  The only way to not let the grief destroy her is to clamp down on emotion altogether.  Where Howie attends grieving parent support groups, Becca simply doesn't want to talk about it to anyone, and often that includes her husband.  Becca may be the center around which the rest of the play turns, but she's not an easy character to cuddle up to.  But there's a big heart breaking underneath the surface.  Just when you're about to forget that, Gianetti lets the mask fall, just for a moment, as in a scene with her mother while they clean out Danny's bedroom.  She isn't unfeeling.   She feels too much.  The question of the play is if this couple - one of whom has to find comfort outside the home, the other of whom can't seem to find comfort anywhere - can salvage what's left of their family and move forward together.  Because of Gianetti and Ravensborg, the audience is very invested in the answer to this question.

Rachel Finch as Izzy and Linda Sue Anderson as Nat provide much-needed comic relief from the very start of the play until almost the very end.  And as with all good clowns, because they give us relief by allowing us to laugh, in the moments when Izzy and Nat get serious, you know something significant is happening.  Finch's Izzy seems as bewildered as anyone when she finds herself becoming the voice of common sense in the play.  And though Anderson's Nat is constantly blundering her way through conversations, she does it because a good mother never quits trying.  And even a broken clock is right twice a day.

"At some point, it becomes bearable.  You can get out from under and carry it around in your pocket, like a brick.  It's what you have instead of your son, so you can't let go of it."

Just like the character of Jason, Kenny Martin II is also a senior in high school, making the young man's dilemma seem that much more real.  Jason keeps coming back to Becca and Howie not because he expects to be forgiven.  He couldn't accept forgiveness any more than he could ask for it.  Nor is he looking for punishment.  He's reaching out to them because they're the only other people who understand what he's lived through.  They can hardly speak of it, but just being in the presence of people who know, people who were there, makes every conversation, no matter how awkward, an enormous relief - even a blessing.  It will be intriguing to watch this new actor grow up on stage in the years ahead.

"Don't pretend he isn't there!"

Rabbit Hole is a wonderful play.  It's very simple.  It doesn't shout or run around.  It's got an oddball sense of humor sometimes, but that just seems to bring it closer to the truth.  It's about the small steps that people take to find their way back to each other after they've been lost.  Theatre In The Round is doing a great job bringing this story to life.

Here's some handy links to a grab bag of random postings around the edges of my blogging life at Fringe time...

Here's a bunch of handy links to all the 4 star reviews of shows in this year's Fringe. 4 stars - Excellent, Class of 2012 would be...

Here's a bunch of handy links to all the 5 star reviews of shows in this year's Fringe. 5 stars - Life-Altering Experience, Class of 2012 would be...

The theater community really stepped up in helping to the defeat the marriage amendment on the Minnesota ballot in the November 2012 election. The Flower Shop Project and Workhouse Theatre joining forces to co-produce my play about gay marriage, "But Not For Love," the month before the election was but a small part, but a contribution to the dialogue around the issue that we were happy and proud to make...

10/17/12 - Minnesota Marriage Amendment: Voting no is the least we can do
Twin Cities Daily Planet version

10/5/12 - Is your theater not gay enough? Theater for a month before Election Day
Twin Cities Daily Planet version

Even if I can't get to show myself, I sometimes give a little shout out to help other know it's out there, so maybe they can go in my stead...

10/19/12 - Want to get some of the politics out of your theater...?
Twin Cities Daily Planet version

The Twin Cities Daily Planet has given me my own little byline page, and has me reviewing shows outside the confines of the blog, too, these days. Like anyone in the Twin Cities, I still miss more theater than I end up seeing. But here's the write-ups on the things I managed to catch since last Fringe...

10/14/12 - Mixed Blood Theater - Next To Normal - All Kinds of Reasons You Should Go, and Not A Single Reason You Shouldn't - 4 stars
Twin Cities Daily Planet version