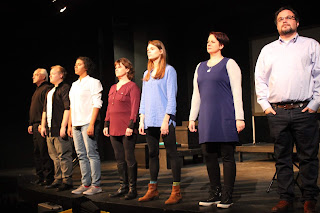 Uprising Theatre Company’s production of The Laramie Project: 10 Years Later is a real mindf**k.  (In a good way.)

I know I saw it ten years ago when it first debuted in an international rollout, with our own Guthrie Theater as the Minneapolis part of a video connection to other readings around the country and the globe.  But, honestly, it feels like someone wrote it yesterday.  Because these days, there seem to be more and more people choosing to live in their own reality, regardless of evidence and facts.  And apparently the good people of Laramie were trendsetters in that regard, ten years ahead of the rest of the country - distrusting law enforcement, the courts, and the testimony of the people actually involved in the events.  It doesn’t take much to rewrite history.  You just have to be stubborn.

“Of course I’m keeping Matt alive by doing this.  That’s the point.  That is exactly the point.”

Ten years after their first visits to Laramie, the artists of the Tectonic Theater Project returned to Wyoming, revisiting the sites and people who were central to the original version of The Laramie Project.  Once again, an ensemble of seven actors (Juliette Aaslestad, Baku Campbell, Bruce Manning, Seth Matz, Michael Novak, Jessica Thompson Passaro, and Tia Tanzer) portray a myriad of different roles to create the world of Laramie, Wyoming, and the people impacted by the murder of Matthew Shepard back in 1998.  Some people had moved away, but nobody had moved on.

“In some ways it’s easier to say, ‘Yes, we have a drug problem in Laramie.’  It’s something you can fix.”

The first act recounts the bewilderment of the theater company artists as they were faced with the determination of the town to put the hate crime label behind them.  They chose to do so by deciding the murder of Matthew Shepard had nothing to do with his being gay.  It was just a robbery or drug deal gone bad.  This flew in the face of the investigation by police, the court cases that followed the arrests, and the testimony of the killers themselves.  But a misleading story on the TV newsmagazine 20/20 provided just enough running room for a rumor to take root in the community and grow.  Even after a PBS show rebutted the 20/20 story point by point, the revisionist history continued to flourish (“who watches PBS?”).  Things people heard from their friends which reinforced a storyline they’d prefer to believe were taken as fact, in place of the actual facts of the case.  Anyone telling them something they didn’t want to hear was just pushing some kind of political agenda.  If certain people or facts are inconvenient, you simply try to erase them from the narrative.

“They took the fence down?”
“The pieces were incorporated into other fences, so no one knows where the original pieces are.”

The first act kind of blew my mind, hearing it now in the context of the current political climate in America.  I’m sure it felt similarly telling to the actors and their directing team (Sarah Catcher and Ashley Hovell, assisted by Emily England).  The second act is spent un-rewriting history by talking with the people most directly involved with the murder, who the Tectonic Theater artists hadn’t been able to talk with before.  They start by meeting with the two killers in prison, and end by spending time with Matthew’s mother Judy, and his friend Romaine Patterson, both now speakers and activists, meeting with schools and other groups around the country to tell Matthew’s story and work to change society and reduce hate crimes in the future.

“I’m a lot angrier now than I was then, because it’s still happening.”

There’s a lot of frustration (“Ten years of change, but no progress”) but also a lot of hope.  There’s an antigay marriage amendment in the Wyoming legislature that gets shut down - by the conservative Republican leadership (?!).  Even from the time of interviewing Judy Shepard to the time the play’s script was finalized, things were changing.  The script was able to tell the audience that the hate crimes legislation so often blocked in Congress was finally passed and then signed into law by President Obama (remember Obama? sigh…). The script could also report the good news that a year after that, the Don’t Ask Don’t Tell policy barring LGBTQ people from serving openly in the military was repealed.  And little did they know it at the time, but the Defense of Marriage Act referenced in the script also finally fell, thanks to the Supreme Court (remember when the Supreme Court had a more progressive majority? sigh…)

“There is a desire for communities to control their own stories.”

The Laramie Project: Ten Years Later is a much more vibrant and immediate document than I expected it to be.  It’s a chilling example of willful denial by a whole society, and how and why that kind of thing can happen.  Nobody here (apart from the killers) is evil.  They’re just human.  Humans get scared.  Humans are weak.  The human mind is susceptible to all kinds of suggestions, under the right kind of pressure.  It’s also an example of the power of storytelling, and how it can be used for good.

“In the end, how will this story finally be written?”