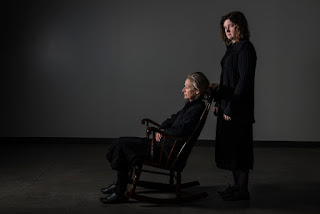 It shouldn’t be as much fun as it is to watch a play like Martin McDonagh’s The Beauty Queen of Leenane. After all, the character’s lives are no picnic.  And a lot of the time they don’t treat one another very well.  But, man, is it funny.  So even when you really shouldn’t be laughing, you can’t help yourself.

“May you be half an hour in heaven afore the devil knows you’re dead.”

A lot of the humor in The Beauty Queen of Leenane comes from familiarity.  This may be set in a rural community in Ireland of the 1990s, but family dynamics translate easily across time, oceans and accents.  It’s an undying truth that no one drives you quite as crazy as your own family.  McDonagh just turns it up a notch.  And in true Theatre Pro Rata style, artistic director Carin Bratlie Wethern and her fantastic cast dig into the script and mine it for all the laughs and heartbreak it’s got to give.  There’s nothing quite as seductive as a couple of imperfect people trying to find a little happiness.

Maureen (Amber Bjork) feels more than a little trapped in her childhood home, caring for her aging mother Mag (Sally Wingert).  When the possibility of romance and a way out appears in the return of an old friend, Pato (Grant Henderson), it’s a toss-up who’s going to do more to sabotage the opportunity for a better life, mother Mag or Maureen herself. Pato’s younger brother Ray (Taylor Evans) tries to be helpful, but Mag’s a little too good at outsmarting him at every turn.

Anyone who’s ever had to care for a family member - parent, child or sibling - knows it’s the little everyday things, coupled with a relentless sense of obligation, that can make you a little nuts.  Sure you love them, why else would you be there?  But if they do that thing one more time… Mag and Maureen push each other’s buttons with a vengeance, and half the time you’re laughing you’re also gasping because you can’t believe they just said that to each other.  Irish humor can be a little dark, but it doesn’t make it any less funny.

“Don’t you deserve a life?”

Wingert and Bjork are clearly having a ball battling it out on stage together, from the little daily indignities to the major blowouts that pepper the story from start to finish.  It’s great fun watching Pro Rata’s go-to leading lady Bjork giving as good as she gets from an acting powerhouse like Wingert.  They feel so evenly matched here that you’d think they’d been working together for years.  It’s a real treat for the audience to see them going at it.

Bjork is also reunited here with Henderson (the two of them and Pro Rata giving me the only production of The Taming of the Shrew that I’ve ever enjoyed).  It’s great to see them sharing a stage together again.  Though the women are clearly the stars of McDonagh’s story, it wouldn’t work without the two hapless gentlemen in their orbit, and Henderson and Evans fill out this world nicely.  Interestingly it isn’t the men who are giving the women their problems here.  Mag and Maureen are their own worst enemies.  Pato and Ray mean well, even if they can’t quite deliver on the promise that the idea of them holds out.  Maureen’s fortunes are going to rise or fall depending on how well she manages her mother, and herself.

“This is a creepy old song.”

I don’t want to spoil the fun, but I have to warn you there is a little violence involved.  No guns, no blood, and I have never been more nervous or more wrong about a fireplace poker, but that’s all the hint I’m giving you.  Just like nothing’s funnier or more exasperating than family, nothing’s more unsettling than watching family turn on each other.  It’s not a horror story where people return from the dead, but there are some twists and turns that make perfect sense that you should see coming but, because of the cleverness of McDonagh and Pro Rata here, you don’t.  And again, those surprises are a lot of the fun.

A part of me was dreading this, thinking “Oh, Irish drama, so very bleak.”  And on the one hand, I’m not wrong on that score.  However, the other thing about the Irish dramatists, they can’t help doling out enormous helpings of gallows humor.  The humor makes the drama hit that much harder, and the drama leavens the humor, making it that much more enjoyable.  It’s weird to say I had a lot of fun watching The Beauty Queen of Leenane, but this play, coupled with this theater company, is a perfect match.  Go, and enjoy.