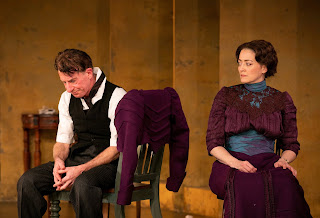 Back in the late 1800s, Henrik Ibsen caused quite a stir with his play A Doll’s House, wherein Nora, a wife and mother, discovers that her marriage isn’t the partnership she thought it was.  Her husband Torvald makes it clear that not only doesn’t he appreciate her contributions to building their home life together, he considers her little more than a child, one of his possessions.  So Nora does the unthinkable, she leaves her husband and three young children behind and strikes out to make a life of her own.  She walks out on them at Christmastime, and the sound of the door shutting behind her is considered one of the more memorable exits in the history of theater.  So after all that, what would ever prompt Nora to return?  That’s the question at the center of Lucas Hnath’s play A Doll’s House, Part 2, currently on stage at the Jungle Theater.

Lucas Hnath also wrote the play The Christians, which Walking Shadow Theater Company produced back in 2016.  At the time, that play blew my mind, and was easily one of the best plays I saw all year.  Recently it resurfaced in a top 10 list of the best Twin Cities theater for the past decade in the Star Tribune, and in that we are in complete agreement.  The 2017 Broadway production of A Doll’s House, Part 2 got all kinds of awards thrown at it.  Plus, the Jungle Theater’s doing it, and since Sarah Rasmussen took the reins as Artistic Director, I haven’t seen a thing there that didn’t grab me.  In fact, I feel bad every time I miss something at the Jungle, because I know I’m probably really missing something I wish I’d seen.  So, as weird as the idea (and title) of A Doll’s House, Part 2 struck me, I figured given the history of everyone involved, it was probably going to surprise and delight me.  And it did.

First of all, you don’t need to have any background in the original play A Doll’s House to figure out what’s going on (though they do have a handy synopsis in the program, and if you want an entertaining rundown in less than 10 minutes featuring Lego people, you could watch this video).  So don’t let the Part 2 put you off.  Also, hilariously, they have an opening narrative crawl (a la Star Wars) projected on the back wall of the set as the play begins to set up the start of the story.  So, right out of the gate, I’m appreciating the production’s sense of humor, and director Joanie Schultz and her team have won me over.

“It’s really hard to hear your own voice.”

Nora (Christina Baldwin) knocks on the door she shut behind her 15 years ago and reunites with house maid Anne Marie (Angela Timberman) who ended up raising the children she left behind.  Nora was surprised to learn she’d never officially been divorced by her husband, and for a variety of reasons, needs to get that bit of legal paperwork tidied up.  As the two women strategize the best approach, Torvald (Steven Epp) unexpectedly comes home from work looking for items he’d forgotten.  The reunion of husband and wife is as awkward as you might expect.  Before it’s all over, Nora’s grown daughter Emmy (Megan Burns) will be pulled in to try and resolve the conflict between her parents.  In order to avoid spoiling the fun, I’ll just say that no one, 15 years on, is the person that anyone else expected.

“I’m fine, sitting here with you as long as you want.”

The setting of Torvald’s house (designed by Chelsea M. Warren, properties by John Novak) is almost comically spare.  Just a series of mustard yellow arches on which things are regularly projected at sudden inflection points in the story when a new character takes control (lights by Marcus Dilliard), and an assortment of chairs.  This puts the focus on the people and the words (and the basic theatricality of the story they’re presenting - reinforced yet again by Sean Healey’s sound design in key moments, nothing’s hiding or trying to slip by here, subtlety isn’t the point).

Even the little things can stand out on a blank canvas like this.  One visual that grabbed me was the little end tables on either side of the imposing door in the center of the back wall.  As part of Mathew J. LeFebvre’s wonderful costumes, both Nora and Torvald each have a hat.  Over the course of the action, these hats are removed, and placed on each of the end tables framing the door.  A symbol of a man, a symbol of a woman, separated by a door, just sitting there.  Lovely.  Just a little touch.  You can see it, or not, but it’s there, while the scene between the characters takes place in front of it.  The whole production of A Doll’s House, Part 2 is full of these grace notes.

“We fail to be faithful because deep down we ache for something more.”

Everyone in the cast is fantastic.  It would be easy to take actresses like Christina Baldwin and Angela Timberman for granted, because they’re so reliably good in everything they do.  Baldwin isn’t afraid to let her character say and do unsympathetic things because Nora isn’t just a virtuous crusader for women’s rights, she’s a human being, and nobody’s perfect.  Also, it takes nerve to turn and speak directly to the audience in unexpected moments, but Baldwin lands those moments every time.  Timberman makes a great foil for Baldwin throughout, and grounds the story in reality, so it’s not just a bunch of people talking about ideas for an hour and a half.  Side note, it’s also fun to watch her have the opportunity to swear onstage.

Megan Burns as Emmy gets to deliver intriguing twists on the situation Nora thought she had all figured out, and makes the best case for not trashing altogether the tradition of marriage that her mother didn’t find was a good fit for her.  If I’m being perfectly honest, I’m not a fan of Steven Epp’s regular mode of acting.  I was bracing myself for another evening of physical and vocal tics that he continually pulls out of his standard bag of tricks.  So imagine my surprise when Epp as Torvald turned out to be a fully formed human being, expressing himself with a great deal of nuance.  The man is a gifted performer, but this time I actually got a chance to watch him act.  I got a chance to forget Steven Epp was onstage and just watch a character in the context of a story.  That’s why I can say, without exception, everyone in the cast is fantastic.

“Love has to be the opposite of a contract.”

The scenes between Nora and Torvald are the best material, in a script full of good material, and both Baldwin and Epp just nail it, moment after moment together.  You really feel like these are people with a complicated history together, that they’ve both changed over time, and quite unexpectedly, they still understand one another in a way that few other people could.  They can push each other’s buttons ruthlessly (and comically), but they are also capable of genuine tenderness.  Again, kudos to director Joanie Schultz for eliciting these kinds of performances from all four of her actors.

“Having epiphanies is easy.  But doing something - “

My friend and I who were attending this performance together had just been having a discussion over dinner about the nature of relationships, and marriages, so it was a perfect complement to the start of our evening to hear these characters struggling with the same thing, and giving us a lot to think about, even as they were also making us laugh.  Human beings are strange creatures.  And as much as solitude has its perks, the instinct to be social and spend time with others has a powerful pull.  Figuring out how to strike that balance, and not drive yourself or other people crazy in the process, is a big part of how we fill in our days in this life.  It was engaging in a way I wasn’t expecting to watch those ideas take human form and duke it out outside of my head for a change.  My friend and I probably missed some of the fun stuff in the closing roll of credits at the end of the play because we were already in the thick of discussing all the things the production had brought to the front of our minds.  We talked about it all the way home and we still weren’t done.

[Photo: Torvald (Steven Epp) and Nora (Christina Baldwin) come to a new understanding of one another in the Jungle Theater’s production of A Doll’s House, Part 2; photography by Lauren B. Photography]