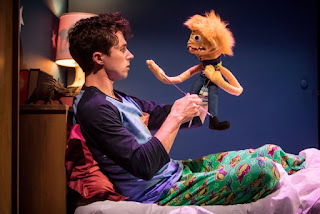 Everyone grieves in their own way.  In Hand To God, teenage Jason (Riley O’Toole) is channeling his emotions over the recent death of his father through a hand puppet named Tyrone.  Tyrone swears like a sailor, says incredibly vulgar things about women (and pretty much everyone else), and regularly shares profanity-laden rants on the origins and nature of theology.  All of which is awkward, because Tyrone is supposed part of a church worship puppet show.  Also, Tyrone the puppet is apparently unkillable, grows some rather sharp teeth, and might be the devil - or maybe Jason is possessed - at the very least he’s not processing his feelings in a constructive manner.

Jason’s mother Margery (Tracey Maloney) is initially unaware of all of this.  Margery is also hanging on by a very thin thread.  Six months of mourning her husband seems to be more than enough for the rest of the community.  Margery spends a lot of her time fending off the unwanted and/or inappropriate advances of Pastor Greg (Kris Nelson) and another teenage church puppeteer named Timothy (Eric Sharp).  Needless to say, Margery’s strategy of throwing herself into working for the church in order to help herself move on isn’t going as planned.  Her new church puppeteer project only has three takers, two of which are Jason (under duress) and Timothy.  The third is Jessica (C. Michael Menge), and though she’d like to spend more time with Jason, she ends up battling insults from Tyrone and Timothy instead.

“You’re so far back in the closet, you’re in Narnia.”

If this sounds like the kind of adult comedy you couldn’t take your church group to, you’re probably right.  But that’s kind of a shame, because Robert Askins’ award-winning play Hand To God, now at the Jungle Theater under the skilled direction of Christina Baldwin, is actually a really clever meditation on faith and its place in people’s lives.  Most plays that take this irreverent approach to religion are normally striking out in a scorched earth kind of way - “Religion once hurt me, so now I’m going to hurt religion!”  In fact, at intermission, I was still holding my breath, hoping Hand To God wasn’t going to end up being one of those plays, because it was doing such a spectacular job of walking a theological tightrope with no net for all of act one.  Imagine how relieved and happy I was to discover that Hand To God ended as it began - being honest, and funny, and smart about really difficult things.

“You brought an abomination into the House of God.”
“You used the church to try and f**k me.”

Director Baldwin has an enviable creative team at her disposal both on and off stage.  Chelsea M. Warren’s church basement set is amazingly good.  Though this church is Lutheran, since I come from a Baptist tradition, it seems safe to say that nearly any member of a Protestant denomination will recognize this basement.  Stage manager John Novak’s work on the props adds another layer of familiarity to the place.

“With an evil puppet on your hand, I don’t think you’re going to regular kid jail.”

On top of the precision of this stunning opening look to the show, there are these cheeky, deliberately low-tech looking (but nonetheless skillful, and funny) scene changes.  Multiple painted backdrops, with intentional rough edges to the look of the painting on them, slide in and out in various ways.  Stage hands are plainly visible as cars and bedrooms and swing sets appear and disappear.  The theater magic (and humanity) here, is in seeing the strings - just like you would at, say, a church puppet show.  This isn’t a mistake, it’s a choice, and it’s oddly enchanting.

“My puppet doesn’t have teeth.”
“Your puppet isn’t possessed by the devil.”

Sean Healey’s sound design includes pre-show and intermission music of 1980s pop songs re-orchestrated for the electronic Casio keyboard in hilarious fashion (my person favorite was a cover of “Come On, Eileen”).  Sarah Bahr’s costume designs are both vivid in color and weirdly perfect in a just this side of normal sort of way for each of the characters.  Grant E. Merges also gets in on the fun with his lighting design, including some demonic mood lighting, and a faulty overhead bulb with its own sense of comic timing.

In addition to the set, Warren also did the puppet designs and they are fantastic.  Since we live in a post-Avenue Q world, brace yourself for the act two puppet sex scene (with multiple positions, and a rather prominent boob reveal).  The fact that the puppets have sex while their operators are also having a fairly normal human conversation makes the whole feat twice as impressive (and twice as funny).

None of Askins’ world could work without a talented cast in all the roles, and Baldwin has delivered a wonderful ensemble of performers.  C. Michael Menge’s Jessica is the only character who doesn’t end up doing stupid things for the wrong reasons (even their puppet seduction strategy comes from a good place).  Tracey Maloney’s Margery, Kris Nelson’s Pastor Greg, and Eric Sharp’s Timothy all do and say unbelievably stupid, even hurtful, things, and yet you still manage to feel sorry for them - that’s a heck of a trick, and not all actors could pull it off.

“Feel how tiny we are in the palm of God’s hands.”

And of course this show wouldn’t work at all without a great actor playing Jason, and his evil alter ego Tyrone.  Riley O’Toole is frighteningly good at both roles.  (I’ve seen O’Toole in impressive shows before, including The Whipping Man at Minnesota Jewish Theater, and Lion In Winter at the Guthrie, but I don’t think I fully appreciated the range of his talent until I saw Hand To God last night.)  O’Toole has played this role before and it shows.  His skill is not just in operating Tyrone the puppet, but in so fully submerging himself in Tyrone’s persona that the puppet seems like a whole other actor onstage.  Jason and Tyrone spend a lot of time conversing (and fighting) together, and in the hands of a lesser actor that could quickly get boring or confusing.  Both Jason and Tyrone are distinct characters in conflict with one another.  It’s a thrilling (and more than a little creepy) performance to watch. But always funny.  And even a little sad.  There are many moments throughout the evening when it looks like Tyrone is operating Jason, rather than the other way around.  O’Toole is so on top of every moment in this production that when an audience member sneezed at one point, Tyrone the puppet said “Gesundheit,” and then Jason and Tyrone returned to their conversation (after the audience was done laughing and applauding, of course).

“You have to decide what walks out of this room - you, or that.”

If you’re looking for an irreverent comedy to brighten your summer days, Hand To God is a production you need to see.  If you’re looking for a comedy that is also slyly smart about things like religion and the human heart, Hand To God can deliver that as well.  Honestly, if you’re just looking for a good piece of theater with great performances (and you can stand a little swearing), you should really treat yourself to Hand To God at the Jungle Theater.  (Tyrone's even vandalized your program for you.)  Good theater just makes me feel better about life in general, and Hand To God is so good, I can probably coast on that feeling all week.  Thanks, Hand To God.  (now through August 19, 2018)

(above: Riley O’Toole as Jason - and Tyrone - in the Jungle Theater’s production of Hand To God - photo: Dan Norman Photography)

Thanks to the eagle-eyed reader who quickly noticed that I had accidentally rechristened the puppet Trevor, instead of his proper name Tyrone, in the first posting. This has been corrected. In the editing, I also noticed autocorrect had "helpfully" renamed the playwright Adkins instead of Askins. Sigh. Also corrected. Apologies.