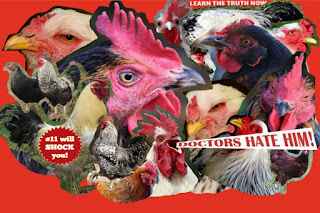 These folks almost ended up on this year’s Top 20 list, until I realized that they were already on last year’s Top 20, listed under a completely different name (Jammed Desk Productions).  They did last year’s What You Will, Shakepeare’s Twelfth Night with a trans twist, which I quite liked.

This year, it’s Hamlet, with a chicken twist.  Part of me thinks, after all the Shakespeare I’ve seen (and all the many Hamlets I’ve seen), that I should be able to resist this gimmick.  But I find myself strangely defenseless against it.  I just have to see how this works (or doesn’t).

Originally the cast list had Hamlet being played by Attila the Hen, but now three chickens from the University of Minnesota’s Pet Away Worry and Stress program (or PAWS) are sharing the role.  I’m honestly kind of glad that I don’t have to possibly rank a chicken higher than human artists on this year’s list, so, phew.