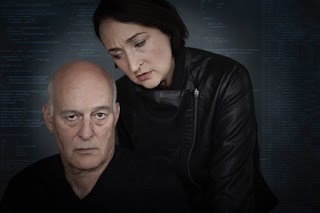 Jennifer Haley’s script The Nether won the prestigious Susan Smith Blackburn Prize in 2012 for a female playwright doing work of outstanding quality for the English-speaking theater.  The Nether is so good I’m going to go buy myself a copy so I can study it.  At first I was a bit wary, despite the fact that the Jungle Theater is producing it (under Sarah Rasmussen’s leadership I haven’t been disappointed yet), Casey Stangl (of Eye of the Storm fame) is back visiting from LA to direct it, and the cast is stuffed with some of the best actors in the Twin Cities right now (Stephen Yoakam, Mo Perry, Craig Johnson, and Jucoby Johnson, along with the unsettlingly good child actor Ella Freeburg).

“I feel only as much pain as I wish.”
“How much pain is that?”
“That’s a very personal question.”

Why the reluctance?  Honestly, plays about the internet, with very few exceptions, suck.  Endless scenes of people sitting at computers, typing while they talk, half the time the playwright doesn’t even understand how computers or the internet work, or how best to exploit them.  Plus, theater is the opposite of the internet.  You have live people, right in front of you, on stage, breathing the same air as all the human beings in the audience, who surround you.  Doing a play about the internet makes even less sense than a play about television or a play about movies or a play about writing/reading a book.  There are, to all of this, exceptions.  The Nether is one hell of an exception.

“You think you’re going to shame me into helping you.  I’m past shame.”

So why, if I hate plays about the internet, do I love The Nether?  Because it’s not about gizmos.  It’s about people.  Deeply flawed and damaged people.  Why, if plays that deal in violence or horror generally leave me cold, do I love The Nether?  Because it’s not about shocking me with gore (there’s not a drop of blood spilled onstage), it’s about screwing with my sense of reality, identity, notions of consent, and right and wrong.  The Nether is a real mind-bender in all the best possible ways.  And just when you think it doesn’t have any more surprises up its sleeve, or new ways to knock you on your metaphorical ass as an audience member, it has one. more. scene.

The Nether is a mystery in more ways than one, and the way this 90 minute thrill ride grabs and holds you is the puzzle it presents and slowly unravels, so I’m going to be very careful not to spoil the fun.  And, weirdly, for all the dark and rattling stuff The Nether deals with, it is a lot of fun to watch.  If you get a special thrill from watching live theater do all the things it does best, The Nether is a real treat.  Writing, directing, acting, design, The Nether nails it from the first scene to the very last.  It’s a crazy mix of hard-boiled, beautiful, frightening, and heartbreaking.

“What we are given.  What we are made of.  The materials of the earth.”

In what is probably our own not too distant future, Detective Morris (Mo Perry) has Mr. Sims (aka, Papa) under interrogation.  Sims runs an alternate reality online for a very particular kind of clientele, which includes himself, called The Hideaway.  It’s a period, Victorian sort of world, where everyone but Papa has a different face.  No one knows anyone else’s true identity, and people’s avatars in this reality can indulge in the kinds of pleasure, pain and violence that the corporeal world shuns and ostracizes.  Morris relies on the testimony of an undercover operative named Woodnut (Jucoby Johnson) as she questions Sims as well as one of his key clients, Mr. Doyle (Craig Johnson).  Doyle is a married teacher near retirement carrying around a lot of shame, and a desire to disappear entirely into his more satisfying online life.  Morris is determined to get either Sims or Doyle to crack.  The key to their secrets may lie in the mind and heart of an avatar in the form of a young girl named Iris (Ella Freeburg).  When all is said and done, there may not be any winners in this game.

“There is a line, even in our imaginations.”
“You’ll never be able to enforce that.”

The real world of The Nether is dark, mostly black and gray.  When The Hideaway appears onstage, it’s full of light and beauty.  Lee Savage’s set, Barry Browning’s lights, Mathew J. Lefebvre’s costumes, and C. Andrew Mayer’s sound create both worlds simply but perfectly.  I wasn’t sure at first about Kathy Maxwell’s incorporation of live video, projecting enormous close-ups of Morris, Sims and Doyle in the interrogation scenes, but I warmed up to it.  (Use of video in plays, like plays about the internet, can easily go very wrong.)  But Maxwell’s projection design is unexpected and well-executed, and when you have actors of this caliber squaring off against one another, it’s an added bonus to be able to really study their faces in a forum that’s larger than life.  Just another layer of identity, a bonding of human and technology.  Ultimately a really smart gamble that pays off.

“The urge, Detective.  The urge.  As long as we are sentient, you’ll never stomp that out.”

I want to say more but I really can’t.  Go see The Nether, and let’s talk about it.  Because there is a LOT to talk about.  The Nether is one of those plays that’s worth repeat viewings.  The Nether is a great piece of theater.  The Jungle Theater has done it again. (run extended through October 21, 2017)

(Stephen Yoakam and Mo Perry in The Jungle Theater’s production of The Nether; photography by William Clark)