On The Loss of Our Friend Sean Grathwol 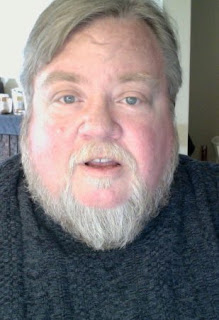 The world, and the Twin Cities in particular, has lost another keen intellect.  Sean Grathwol was a lover of words, a crafter of words, and someone who enjoyed a good book or play as much as he did a fine meal.

Sean’s own output of plays and prose was selective.  He chose his own words very carefully (a mutual friend said of his writing output - “Pages from Sean were always like a long-awaited candy.”)  But when Sean spoke or when he wrote, you were better for him having done so.  If he was commenting on your work, it was some of the smartest feedback you were likely to get.  It would be hard to find a person more supportive and encouraging of new plays staggering their way into being, making their sometimes imperfect way into early productions.

He was also one of the kindest, gentlest souls I’ve had the privilege to know. (Another friend recently said of his demeanor: “There was a reason he got cast in Roundtable readings as intellectuals, judges, bluesmen and kings.”) Sean was a large man, but not an intimidating presence once you got to know him - which (for Minnesota) was a surprisingly easy thing to do.   To his many nieces, nephews and younger cousins, Sean was the embodiment of what Santa Claus must be like, were he walking around among us (not quite as gregarious, but just as good).  And for an all too brief time he was walking among us, but now he’s gone.  And we are the poorer for his absence.

Sean Grathwol was one of the first writers I met when I moved to Minneapolis after grad school (egad, over 25 years ago now).  I responded to a notice for a playwriting group posted at the Playwrights’ Center.  The group met in each other’s homes.  It’s a group I still help run today (though it’s had many evolutions over the years and seen many people come and go). Huddled around a friend’s dining room table in those early days, we coaxed each other’s plays into being, reading the parts aloud, enjoying both the intentional and unintentional comedy of early drafts, making the work (and each other) better in the process.

Members of the group, Sean included, migrated over to a writer’s community at the Playwrights’ Center called the Roundtable.  Full drafts of scripts were read, chairs were circled up afterward and the play discussed, and then we adjourned to a coffeeshop or neighborhood bar down the block and continued talking about the play.  It was a vibrant community for a number of years.  Sean was a key part of that community.

Sean was infinitely patient and supportive, but he had his limits.  Even then, he knew the right words to say.  After a Roundtable reading, the writer is supposed to sit and take notes on the feedback, not responding until everyone’s had their say, led in discussion by a moderator to keep things civil and productive.  One evening, a writer couldn’t keep themselves from interjecting and rebutting each comment, till finally Sean wasn’t having it anymore. “Listen. We’ve all sat here very patiently and listened to you speak through your play at us for over two hours now. It’s time for you to extend the same courtesy to us, sit quietly and listen for a bit.”  I still try to hold to this today, thinking of it as the Sean Grathwol rule of feedback.  The writer speaks through the play.  The audience responds to the play.  Then, the writer can respond to the audience.  (If the writer isn’t getting their message out through the play effectively, the writer needs to know that.  It isn’t the audience’s problem.  It’s the storyteller’s problem.)

The writing group continued alongside the Roundtable.  When the Roundtable was disbanded by the Playwrights’ Center, the writing group continued on.  Every now and again, though, you invite a vampire into your home and they refuse to leave.  A toxic personality entered the group, and their disruptive presence drove a number of people away from the writing group for a little while, including myself.  Those who stayed wanted the group back as it was.  It was Sean (who had remained) who met me for lunch one day and urged me to return.  He felt the group wasn’t going to get better if the good people left and the bad person stayed, unchallenged.  He was, as always, right.  So I and others returned, and worked together with Sean and the others who’d kept the group going to try and force a better atmosphere back into the group.  Things eventually reached a breaking point, but the old guard like Sean stood firm, and the corrosive element was expelled.  After that, the group established some rules (for letting people in, and getting people out), under the philosophy of “drama on the page only, please.”  Without Sean, none of that would have happened.

Sean was there for all our firsts - from first scenes to full first drafts to first productions.  You’re unlikely to find a more loyal and supportive audience than Sean.  His own plays and productions were fewer but, like Sean, sought after and most welcome.  I found a play of his on my bookshelf the other night and sat and read it.  You can still hear his voice in the words of his characters.  The one I found was Playing Small - about three young musicians.  The young woman of the trio has lost touch with her music and is in an almost catatonic state in relation to the other two characters.  But she speaks to the audience in poetic monologues.  In one there is the refrain:

“It’s eating and it’s eating right.
It’s knowing what your hunger
Is a hunger for
And how to feed it.
Concupiscence
Sister Michael called it
When you don’t know
And you settle for something less.”

Sean never settled.  He demanded the most from himself and others.  He was probably too unforgiving a critic of himself (but then most of us are).  Otherwise, he might have left more words behind him.

Sean and I saw the national touring company of Angels In America when it came through Minneapolis, back when the original production was still playing on Broadway stages in New York.  We saw part one in the afternoon, dined together over the dinner break, and went back for part two in the evening.  It was a wonderful all day event, a celebration of our love of words and theater.  (It’s still two of my favorite plays, the top of my top ten list.)  I still have the tickets, stuck to to a cork board on my wall - July 16, 1995 (dear Lord, over 22 years ago now, the time, the time…)

[It occurs to me that any photos I have of Sean are pre-cell phones.  What exist, there’s envelopes, albums and boxes where they probably live to be sorted through since the move to my new home two years ago.  Like that Avenue Q song, I wish I took more pictures…]

I’m told Sean died in his sleep. As horrible as it is to lose him so soon, I’m hopeful that means he went quickly without pain.  A gentle man deserves a gentle end.

Angels In America part one begins with a funeral for an old woman who lived a long life.  The rabbi says he did not know her:

“I cannot accurately describe her attributes, nor do justice to her dimensions.”

That sounds about right.

Try as I might with Sean, I cannot accurately describe his attributes, nor do justice to his dimensions.

I recently saw a filmed presentation of the National Theater of England’s revival of Angels In America, part two.

Part two begins with the world’s oldest living Bolshevik invoking the power of words to change the world:

“Change?  Yes, we must change, only show me the Theory, and I will be at the barricades, show me the book of the next Beautiful Theory, and I promise you these blind eyes will see again, just to read it, to devour that text. Show me the words that will reorder the world, or else keep silent.”

Sean was a fervent believer in the power of words, and a tireless champion for calling them into being, both his own and those of many, many others.

Angels In America part two ends with a benediction of sorts:

“The world only spins forward.
We will be citizens.
The time has come.
Bye now.
You are fabulous creatures,
each and every one.
And I bless you:
More Life.
The Great Work Begins.”

Thank you, Sean.  For everything.  We shall miss you, my friend.

What a beautiful tribute! Thanks.

Outstanding tribute Matthew. I'm Sean's cousin who lives in Virginia. We got to know each other as kids through family visits. I had lost touch with him over the years, only speaking briefly with him at funerals and weddings. Your words have helped me to get to know him again and reflect a bit on his life, and those he touched. Thank you so much for that. May he rest in peace.

This is incredibly heart felt and warming. I had the pleasure of working with Sean for the last 3 years and he was such a pleasure to be around. We all miss him deeply.
Thank you!
Kat ( STEVEKAT)

Thank you so much, Matthew. Sometimes tears, like those this tribute called up for me, are the most healing response. Just about six weeks now since we lost him and I am still reeling, still reaching for the phone to call my big brother.