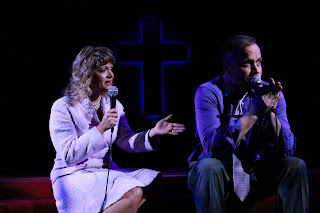 So far this year I’ve seen 32 theater productions, plus five play readings, a dance show, a 24 hour play festival and a night of improv comedy.  Out of all that, Walking Shadow Theatre Company’s current production of Lucas Hnath’s The Christians is the best thing I’ve seen all year.  Fair warning: depending on your tolerance for information in advance of seeing a show, some may consider this review mildly spoilerish.  (But then why read a review in the first place, right?)  I will try my best to leave the bulk of the surprises for your seeing the show yourself because, wow, should you see this show yourself.  But I also imagine with a title like The Christians, you might need some convincing to go.  And those who hear the title and don’t need convincing might be going for the wrong reasons - either to have their faith mindlessly reinforced, or to see some good ol’ godless, liberal artist-style, Christian-bashing.  Neither of those is going on here.

“I have a powerful urge to communicate with you but I find the distance between us insurmountable.”

The synopsis on the Walking Shadow website is also incredibly vague: “Twenty years ago, this church was just a modest storefront. Now our congregation of thousands gathers together to share faith and hear a monumental announcement from Pastor Paul. This will be a day of celebration... But what Pastor Paul has to say changes everything, shaking the foundation of his church, community, and home.  Backed by a live choir, The Christians is both epic and unexpectedly intimate, an unflinching look at faith in America – and its power to unite or divide.”

“There is a crack in the foundation of this church.”

Based on that you could be forgiven for thinking - sex scandal.  Pastor Paul is cheating on his wife.  Pastor Paul is secretly gay.  Pastor Paul is a pedophile.  No.  No.  And, no.  (And just to be clear, I’m thinking of those as three distinct things, not different layers of the same revelation because, well, ew…)  So if it’s none of those things, then what is it?  Well, the phrase “unflinching look at faith” is pretty apt.  And since I can see your eyes beginning to glaze over, if I tell you the playwright’s other titles include: Red Speedo, The Courtship of Anna Nicole Smith, and A Public Reading of an Unproduced Screenplay About the Death of Walt Disney, does that cause you to breathe a sigh of relief that the guy has, you’ll pardon the expression, an irreverent sense of humor?  Not to mention the fact that Pillsbury House Theater did his play Death Tax just last year.

So: smart, yes.  Funny, yes.  Moving, surprisingly, and absolutely yes.  Pastor Paul (Andrew Erskine Wheeler - where the heck did he come from? he’s amazing) drops a faith bomb of sorts on the unsuspecting congregation of his megachurch.  It’s an announcement equally unexpected by the crew sharing the front of the sanctuary by the pulpit with him: his faithful wife Elizabeth (Bonni Allen), the assistant pastor Joshua (Kory LaQuess Pullam), church board representative Jay (Charles Numrich), and singer in the choir, Jenny (Brittany Parker) - who speaks up on behalf of those in the congregation who are beginning to doubt Pastor Paul after his announcement.

“Isn’t it a church that should make a thief feel welcome?”

There is an actual choir onstage, accompanied by keyboardist Rick Bernardo, led by choir mistress Sophia Bauer, and including Sue Gerver, Siri Hammond, Anika Kulander, Anita Mack, Lily Noonan, Jessica Thompson Passaro, and Alex Yang.  Eli Schlatter’s uncanny set is an eerily perfect presentation of many of the elements seen in suburban megachurches around the country and on TV, right down to the large flat screen TVs which broadcast the words to the hymns so everyone can sing along (don’t worry, you don’t have to - as the choir mistress reassures us at the top “The spirit moves each of us differently.”)

“If there’s no punishment, why are we good?”

The video content from Megan Reilly is just generic and innocuous enough to fit the whole environment perfectly - that can’t have been easy.  It’s so hard to hold down our sense of irony in situations like this.  Sara Wilcox’s costumes are spot on, for the precise reason that they don’t seem like costumes at all - it’s just how these characters would dress.  The pastor’s wife doesn’t speak a word until the closing minutes of the play but you can tell so much about her just by looking at her.  The actress and the costume together are doing work so subtly that you don’t even really notice.  Given that director Amy Rummenie’s staging encompasses all four corners of the Mixed Blood space and not just the stage proper, Wm. P. Healey’s lights are key to throwing emphasis as needed and tying this whole world together around the audience.

“What good is a church that no one goes to?”

Huge kudos have to go to Eric Wigham working the sound system because a unique feature of this play is that everyone works with a microphone either in their hand, on a stand, or at the pulpit.  It begins with the pastor’s sermon but widens out to include all the scenes, even the most intimate ones.  It’s all part of a larger sermon style presentation.  Pastor Paul is subtly presenting these scenes to us as if they were further stories he was using to illuminate his message.  Long mic chords, possible feedback, volume issues - these are all challenges ably met in the production.  And when someone leaves their microphone behind, it can be just as violent a statement as any mic drop.

I was surprised by how uncomfortable I felt at the beginning of the play.  I wasn’t expecting that.  I didn’t grow up in a megachurch but I did grow up in a series of suburban churches, some of them led at times by my father or my mother in the pulpit.  Our hymns were more old school, traditional hymns than the kind of inoffensive synthesizer Christian pop ballads they have nowadays, but the choir robes look very familiar.  The reasons I felt uncomfortable were several.  I didn’t know what I was going to see, and felt it could go horribly wrong in any number of ways.  I wasn’t sure how much audience participation was going to be required of me (blessedly, none - though I guess closing my eyes and bowing my head at appropriate times for prayer counts).  I wasn’t, frankly, sure about the audience I was in.  Why were they here?  Though I feel as though I have a personal relationship with God, and we’ve made our peace with one another, there are a lot of well-meaning, good-hearted folks out there who still see me, as a gay man, as out of place in a church setting.  To say I felt unsafe is not an exaggeration.

“No matter what you’ve done, it can all be washed away.”

Thankfully once Pastor Paul makes his announcement I then realize, “oh, it’s gonna be THIS kind of play.  This play wants me here, wants all of us here.  This play NEEDS us here.  This is gonna be great.”  Sometimes after a long day at work, if the play doesn’t engage me, my attention can wander.  My body may even strongly encourage me to take a nap, an urge I have to actively resist giving into.  For The Christians, no such worries.  I was riveted from start to finish.  The performances are thrilling.  The mindf*ck this play works on the audience is one of the most exciting things I’ve seen in a long time.  It’s both entertaining and thought-provoking.  It managed to put into words things I’ve been wrestling with, and things our country should be more consciously wrestling with, for a while now.

“All God asks of us is to just believe that He is there.”

I didn’t know I needed The Christians.  Thank God (pun intended) Walking Shadow knew.  I want to buy myself a copy of this play.  I want to read and see more things by this writer.  And all these performers and production artists either reinforced my high opinion of their craft, or just introduced themselves to me in one heck of a showcase.  Even if you don’t think you need to see The Christians, trust me when I say you need to see The Christians.  It tackles where we are as a country right now, and challenges us to find a more humane and inclusive way forward - warning us the entire time that, damn, it’s not gonna be easy.  But it’s necessary.  It’s a rollercoaster of a play, with a heart as big as its brain (and it’s got a pretty big brain).  It’s a perfect example of why we still do live theater.  This experience couldn’t happen any other way.

See The Christians.  (It’s going to be hard to top this production, but the Twin Cities theater community still has seven months of 2016 left to try.)

[There.  Did it.  Relatively spoiler-free.]