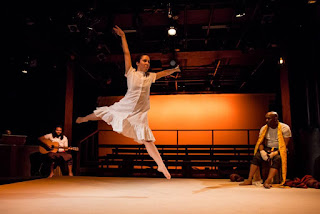 Here’s the weird and frustrating thing about Sandbox Theatre’s latest offering, the boxing drama Queens - it’s half a great play.  Act One is almost entirely fantastic, with the exception of the very last sequence that gets us to intermission.  The beginning sequence of Act Two is a thrilling and clever bit of theatrical storytelling.  Then the bulk of the second act after that kind of sputters out.  Granted, so does the lead character and his fortunes, but many a downfall over the years has been compelling to watch.

“Raymond Queens once hit a man so hard…”

The thing that makes it especially weird is that the three performers involved (Neal Hazard, Theo Langason, and Emily Madigan) are uniformly excellent throughout, beginning to end.  Their talent, energy and commitment to the story never flags.  It’s just that the play doesn’t give them much to work with in the second half, and there’s only so much even a great actor can do.  This is also partly because Queens is a story about boxing, and American popular culture has always been more than a little obsessed with boxing.  As my friend who attended the show with me observed afterward, “If you hadn’t read a book, watched TV or seen a movie in the last twenty years, some of that might have seemed more fresh and original.”

“It makes me wonder what happens when they get past the horizon.  Where do those tracks lead?”

Queens is the story of fictional boxer Raymond Queens, told as part biography, part legend.  Plagued by a ringing in his ears, and unable to hold down a job in the steel mills of Pennsylvania without getting himself into a fight, Raymond turns his hotheaded personality and unrelenting spirit into advantages in the boxing ring.  The three person cast all play multiple roles throughout and make it look so easy you can forget how hard that is to do well.

At intermission, I marveled at how Sandbox does what they do, creating shows from scratch with an ensemble like this.  The dialogue in act one really sings - it’s both believable as everyday conversation and shot through at the same time with so many poetic turns of phrase that your ears just have a good time listening to these three actors talk.  In addition, there’s plentiful (and beautiful) music, courtesy of deVon Gray who performs live on the piano the music he composed for the show.  It’s a perfect soundtrack for the story, augmented by the original song “The Difference” written and performed to bookend the show by Theo Langason.

“It’s the falls you know are coming that are the worst.”

Langason also served as co-director of the piece alongside Matthew Glover.  The ways in which boxing becomes almost like dancing in Sandbox's physical approach to theater storytelling are really exciting to watch.  The design of lights (Heidi Eckwall), costumes (Samantha Rei Crossland), and set (Derek Lee Miller) all simply and beautifully create the world of Raymond’s story.  A basic square of canvas and the empty space surrounding it include the addition of a fourth bank of seats for the Park Square space, making it a show in the round.  These wooden bleachers also help complete the boxing world of Raymond Queens.  Every time the audience looks across the space at one another and sees those bleachers, they help to ground us in the past.

“With the sun in your eyes, and the wolves at your back…”

So if the story and production are so good for so long, what’s the problem?  I think it starts to go wrong when young Raymond’s coach and mentor gets approached by a shady character in order to get Raymond to throw a fight (so the gambling business can make a little more money).  Again, the actors do a great job here creating these characters, especially Emily Madigan who has to, and does, convincingly play a menacing man.  The performances aren’t the problem, it’s the story.  The coach never makes it explicit to the boxer that he’s supposed to throw the fight.  So the enthusiastic boxer doesn’t throw the fight but wins instead and the coach pays the price.  Before there can be any personal, especially emotional, repercussions for Raymond, we’re at intermission.

The first act up until this point is all about playing with boxing story cliches and subverting them by making them specific to Raymond’s character.  Here, at the end of the first act, and one could argue a crucial turning point for Raymond’s career, it stops doing that.  Even though the beginning of the second act is a great kickoff - swapping in older Raymond right at the start, and efficiently giving the audience a quick tour through the evolution of his career - it doesn’t adequately deal with what Raymond’s record means.

The implication of the end of the first act is that Raymond will now become someone who throws fights when he’s told to, for the convenience of others, for money, and under potential threat to his own health and well-being.  Raymond’s records of wins, losses and draws isn’t a true snapshot of what he can do as a boxer.  Not all those losses were fights he should have lost.  Not all of those draws were fights he shouldn’t have won, if he’d been allowed to.  A more detailed exploration of that could have been fascinating.  When does it turn from a career or a calling into something that’s just a job, where you do what you’re told but there’s no joy in it?  Why do you keep fighting - is it because sometimes you’re allowed to win?  Is it because you don’t feel like you were built to do anything else?  That people from a certain class, or a certain race, have limited opportunity and this is a way to buck society?

“Virginia’s got a funny way of reminding you of things.”

What we get instead is Raymond, and a prostitute named Elizabeth - for two-thirds of the second act.  Raymond loses a lot of his specificity as a character, and Elizabeth never really gains much of her own.  Again, not the actors’ doing really, it’s the text.  It seems to run out of steam, or run out of ideas, or both.  Think of a generic story that comes to mind when you hear the words “boxer” and/or “prostitute.”  That’s what’s going on here.  Complete with a potential escape to a happy life away from the madness of their current situation, and the one last fight that the boxer just can’t resist.  I understand that the story is trying to do something different in the second half and so the structure and approach of it change accordingly.  But if ain’t broke in act one, why fix it?

“Can’t change it, but you can make it right.”

If we’re going to spend that much stage time - the remainder of the play - with the actors playing just these two characters, then we should learn more about those characters.  We should learn why they live the way they live, why they want to change that (or why not), and what’s stopping them.  In Queens, we don’t.  What do they see in each other?  What convinces them that the other person is a vital part of their way out of a dead-end life?  Everything in the second half is pretty vague.  There’s promise in these characters, and very much in these actors, and Sandbox Theatre needs to do a better job of exploiting that.  Because Queens could be a powerful story, legend, morality tale - that’s the exciting promise of the first half.  It needs a second half that delivers more fully on that promise.  But man, that first act.  You should see that first act.