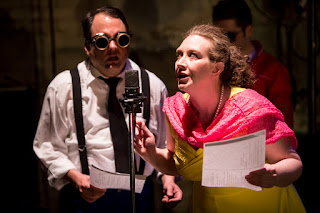 “There are three speechless cellos in the whole wide world.”

Swandive Theatre’s production of Kid Simple is the kind of fully realized technical marvel that they last pulled off with their great presentation of An Outopia For Pigeons (which I know drove some people crazy, but which I loved). Anne Henly’s set and Jesse Cogswell’s lights create the framework in which this weird story exists, and Lucas Skjaret outfits everyone in distinctive and brightly colorful costumes which further enrich the palette that gives the production its “look.”  There is also a repeated use of video and projections (the work of Ian Knodel and Nathan Gebhard) that keeps everything just a little off-center.  But the real star here, naturally, is the sound and foley work of Derek Trost, the human manifestation of lead character Moll’s creation known as The Third Ear.

“If only she could murder her memory.”

In the lead-up to the start of the show, all the actors keep checking the variety of microphones placed around the set while a metronome ticks off the time in concert with an enormous projected clock face on the back wall of the Southern Theater.  Those microphones get quite a workout.  Debra Burger is the silken-voiced narrator for the evening (though don’t cross her, she has her limits).  In addition to playing Moll’s parents, Kevin McLaughlin and Sarah Broude take on the roles of villain and heroine, respectively, in an old-time radio show serial called “Death and The Music Teacher.”  And The Third Ear is all about the microphone for amplifying sounds both mundane and ridiculous.

“The loneliness most of all.”

High school student Moll (Boo Segersin) creates The Third Ear, which can hear sounds that can’t be heard by the human ear.  She wins the science fair but also catches the attention of two nefarious cave dwellers (also McLaughlin and Broude) who dispatch their henchman (Kip Dooley) to seduce Moll and steal The Third Ear to be used for their own destructive purposes.  Moll enlists the aid of the last virgin left in the 11th grade (Nathan Gebhard) in her quest to retrieve The Third Ear before it’s too late (because I guess if you’re going to have a mythic hero’s journey, you need a virgin).  Along the way, the henchman manifests himself in various forms to block their path.  Moll sacrificed a little piece of herself to bring The Third Ear to life, and she may have to sacrifice another part of herself to stop it.

“Sound of a great piece of wood straining.”

The whole cast is fantastic (though Broude’s radio play heroine, Dooley’s shapeshifting mercenary, and Berger’s omniscient and exasperated narrator are particularly wonderful).  Co-directors Meg DiSciorio and Damon Runnals have all their collaborators working in perfect sync at just the right pitch of lunacy for the whole crazy story to work.

“Sound of cogs turning in her head.”

So why didn’t I love it as much as I wanted to?  When the script is clever and the actors are great and the directors are rock solid and the design is stunning, what’s missing?  The script for Kid Simple might actually be just a little too clever for its own good.  As much as I love the dazzling word play of it all, there was often a feeling that the play was a bit cold, and holding me at arm’s length - “No, don’t get swept up in feeling things.  Stand back and look at what tricks I can do!”  The words often came before the needs of the characters, or of the audience to really bond with and care about the characters.

“A ship wrecked at sea.”
“All ships wreck at sea.”

And then there’s the, what I hope are, unintended messages embedded in the script.  In a weird way, Kid Simple seems to be saying, “No good can come of a young woman using her brain, or having sex.”  Also, “Sex is a dark and bad thing.”  It’s not enough to just a put a woman in the center of the story.  She has to drive it, not just be the victim of it.  And it doesn’t really do much to undo all the silly tropes about the over-inflated value society places on virginity if you swap a male in for a female virgin, but still reinforce all the cliches.

“You’re the mad scientist AND the monster.”

Does any of that undermine all the amazing things that are happening in Kid Simple, a radio play in the flesh?  Not really.  The production is very much worth seeing.  It’s exciting to watch all the things that theater can do, and Kid Simple really swings for the fences on all fronts.  There’s a little thrill in the way Swandive Theatre pulls off all the many tricks that Kid Simple asks of a company.  Everyone here deserves a big enthusiastic audience for the stunts they’re pulling off with such aplomb.  Kid Simple is something different, and for that reason alone it deserves to be seen.