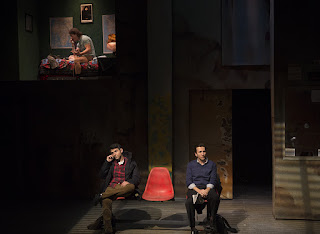 It’s rare that I sit around after a play talking about that play for longer than the actual run time of the play itself, but that’s what happened with Park Square Theatre’s production of Stephen Karam’s comedy/drama Sons Of The Prophet.  The cast is stuffed with great actors whose work I’ve admired for years, as well as newcomers getting a prime showcase for their talents.  Joseph Stanley’s epic two story set with multiple sliding doorways allowing for a variety of locations to emerge is fun to watch in action.  Karam’s script is as funny as it is deep, and director Jef Hall-Flavin orchestrates the whole thing with a light touch (which is important, because with everything going on in this play, and there’s a lot going on both above and below the surface, it would be easy to get bogged down).

“That kind of healing only happens in Lifetime movies.”

Joseph (Sasha Andreev) needs to extricate himself from his eccentric and emotionally needy boss Gloria (Angela Timberman) in order to deal with the aftermath of a car accident involving a member of his family.  A high school prank with a hijacked football team mascot - a decoy deer - in the middle of the road to make cars swerve went a bit too far.  Joseph has to take on the responsibility for his teenage brother Charles (Maxwell Collyard) and elderly uncle Bill (Michael Tezla).  Meanwhile, Joseph’s own body starts to turn against him, but the doctors can’t figure out why.

“I’m in a bus station that smells like urine.  I’m not gonna have an emotional moment with you.”

When the high school prankster Vin (Ricardo Beaird) gets his sentence in juvenile detention postponed by the judge so that the young man can finish out the football season, the community is divided and Joseph’s family is put in the middle of the controversy.  The weird nature of both the crime and its punishment attract the media, including a reporter named Timothy (Dave Gangler) who takes more than a professional interest in Joseph.  (Patty Mathews and Sally Ann Wright round out the cast playing multiple supporting roles of colorful townspeople in this Eastern Pennsylvania community.)

“This shouldn’t be easy for you.”

The thing I liked best about Sons Of The Prophet was how inclusive it was when it came to addressing gay identity in the context of an extended family and the community at large.  Three characters in the play are gay and a fourth is certainly leaning that direction.  But being gay is not the issue.  No one’s gayness is a source of angst or struggle here, any more than their eye color or hair color is.  The best example of this is the scene where Joseph and the reporter Timothy meet.  In most other plays, movies or TV shows, one of them would be a man and the other a woman.  Here, it’s two guys.  But they flirt and dance around their attraction to each other while they talk about anything else but, just like any other couple meeting for the first time and encountering a spark between them would do.  It’s a charming piece of writing, well-directed and subtly acted, and sets the stage for everything that happens afterward between the two of them.

“It’s so nice coming in out of the cold.”

The thing about the script that left me befuddled, and the source of most of my post-show conversation, was the troubling intersection of both class and race.  The treatment of those subjects seems entirely deliberate on the part of the playwright, but it’s hard to know where he wants his audience to land when it’s all over.  Because people do some fairly gross or borderline insensitive things to one another from the beginning of the play right up to the end.  To the point where I end up not liking most of them.  So is the playwright saying, yes, you should be uncomfortable with all of this, and you are under no obligation to like any of these characters; you are also under no obligation to enjoy yourself watching this play - and if you do, I may have failed?  That seems like a strange and counterproductive mission for a play.

“You should be grateful that you have a central nervous system for your body to attack.”

For instance, this is 2007, pre-President Obama and Obamacare, so Joseph’s boss Gloria is not above using health insurance as a tool to blackmail him into writing a book about his family.  Joseph’s family name is Douaihy.  They are Lebanese-American and incredibly distant relatives of best-selling author of The Prophet, Kahlil Gibran.  Gloria sees a publishing goldmine here and is willing to back Joseph into a corner to take full advantage of the connection.  She is wealthy.  He is not.  She wants to use him, and his family, to make herself wealthier and put her lopsided career back on track.  Gloria thinks talking sympathetically to Joseph about the ongoing troubles in the Middle East counts as being his friend - even though Joseph and his parents were born and raised in the USA and Joseph’s never even visited Lebanon.

“I don’t want the fact that we’re estranged to keep us from seeing each other.”

Then there’s Vin and his relationship to Joseph’s family.  Vin is African-American and being raised in the foster care system.  Football is his only reliable route to college.  So the judge wasn’t just postponing Vin’s sentence to help the high school football team win a championship.  The judge was also trying to preserve Vin’s opportunity for a better life.  Since Joseph’s family is the one most harmed by Vin’s prank, Vin seeks them out to apologize.  They have the power to tip public opinion quite easily against Vin, and ruin his life.  Charles, Joseph’s more flamboyant gay brother (yes, both sons in the family are gay), is attracted to Vin.  Charles in addition to not hiding his gayness, also was born with only one ear.  He had a second ear fashioned out of skin the doctors carved out of his chest.  Charles flirts with Vin, offering up both his ear and his chest to be touched, and Vin obliges.  They then go upstairs to spend time together in Charles’ room.  Vin also ends up staying the night.  All of this seems innocent enough, and Charles doesn’t seem overtly manipulative.

Vin doesn’t seem an unwilling participant in all this either.  Yet, how much power does Vin really have in this situation? He needs something from these people.  So if they want something from him, whatever it is, how much freedom does he feel in being able to withhold it?  It feels predatory and exploitative in the same way that Gloria blackmailing Joseph over his health insurance does.  There a white woman is pressing her advantage over someone she sees as both lower in status because he’s below her on the economic scale, and ethnic (and thus different, even though Joseph and his family see themselves as just as white and American as she is).  In the latter situation, the middle class Lebanese-American family is holding sway over a young, lower-class, African-American man with no one to advocate for him.

“In medicine, when we hear hoofbeats, we think horses, not zebras.”

A side concern is that the play thinks nothing of showing us Joseph’s physical encounter with Timothy, but not Charles’ night with Vin.  You could argue, of course, that the play focuses on Joseph, not his brother.  (On one level, I know, I know, I should be grateful for even one gay love scene before a spinal tap - don’t worry, that makes sense in context - and shut up.) But it’s still another example of the greater visibility given to “straight-acting” “normal” gay men rather than more effeminate gay men.  Also Collyard does a good job in portraying Charles, and Hall-Flavin does a good job of setting the tone of the production, so that we’re not laughing at Charles but with him.  Still, when a script and a production embrace a stereotype this wholeheartedly that’s been used for cheap laughs before, it always makes me a little nervous.  Kudos for not playing into my worst fears there.  Charles’ sensitivity comes less from being gay and more from the fact he’s a teenage boy who lost both parents, has an uncle on a downhill slide into old age, and a brother with compounding medical conditions the doctors can’t seem to get a handle on.  You’d be a little on edge and emotional, too.

Speaking of emotional, Charles actually handles himself a lot better than his older brother.  Joseph wants to always seem like a good person, do what’s expected of him, not offend anyone.  But it turns him into a giant mass of neuroses, and he can only suppress his own feelings for so long.  Periodically Joseph has explosions of anger and petulance that are far more hurtful to those around him than if he’d just sucked it up and faced people and told them what was bothering him as it happened.  I’m not sure I see anything noble or self-sacrificing in that.  It’s not healthy for him or anyone else around him, and his body keeps trying to tell him that.  Having a tale revolve around a character this neurotic has its downsides.  Funny?  Sure.  But if you feel anything for any of the other characters in his orbit, then a lot of the time Joseph seems like a jerk, not someone you root for.  Andreev is to be commended for not holding back but giving us this potentially unsympathetic character with all his faults on full display.  The production wouldn’t work without him at the center of it.

“We’re not strangers.  We know each other well.”

Sons Of The Prophet was a Pulitzer Prize finalist for a reason.  Loyal subscribers to Park Square lobbied hard to get the theater to do this play for a reason.  Karam’s writing is as smart and complex as it is funny.  Saying I enjoyed it seems weird.  Saying it fully engaged me from start to finish and then refused to get out of my head for hours until I talked it through seems more to the point.  Expect to laugh, but don’t expect the play to spoon feed you anything like an easy answer.  Audiences will have to figure that out for themselves.  (I still am.)  Should a storyteller give an audience more guidance than this?  There’s a range of options between simple clarity and beating an audience over the head.  Should a writer not want an audience to emotionally connect to their characters, or feel for them?  I may be overthinking it (I’d be surprised with this play if I weren’t), but Karam seems to be asking this of his audiences.  You should probably be among them.  You probably won’t see another play quite like it on this scale again this year.