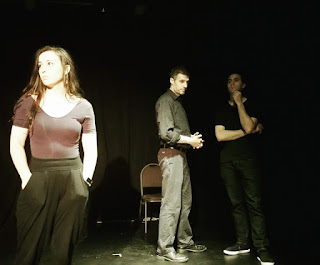 Set A of the 2016 edition of Gadfly Theatre Productions’ Final Frontier annual geek fest of new short plays, Heroes And Villains, has a couple of real winners, plus one intriguing idea that gets undone by weird directing choices.

“Saddle my rooster!  I go to seek my fortune!”

Eli Effinger-Weintraub’s comical feminist deconstruction of fairy tales entitled Your Princess Is In Another Lair is a perfect way to kick off the geek fest and submerge us in the world of heroes and villains.  The script is a hoot and the cast and director Denzel Belin had a ball putting the whole weird thing together. A young female Reader (Catherine Hanson) gets a book of fairy tales from an uncle who doesn’t realize she’s a little old for storytime. Looking at fairy tales with a more mature eye, the Reader is appalled and decides to rearrange the narrative into something a little less misogynist.  When she tries to put a princess in the role of beleaguered hero, she learns that the princess has some gender identity issues and so prefers to be called The Unfortunate Prince (Mary Kathryn).  Their nemesis is The Hedgehog (Michael Hentges) - long story - and between the three of them, they manage to get a father, a king (both Paris Kelvakis), a witch and a queen (both Megan Guidry) into and out of a lot of trouble along the way.  The Unfortunate Prince needs a love interest, so the Reader quickly gets dragged into the thick of the story herself.

“You’re a woman in a fairy tale and you’re not a queen or anybody’s mom.  There aren’t a lot of options left.”

There’s a ton of humorous knowing asides and meta-dialogue that takes patriarchal hetero-normative fairy tale stories to task for being such lousy formative source material for girls in general, and queers in particular.  “Your Princess Is In Another Lair” is just a heck of a lot of fun.  Effinger-Weintraub’s got a point to make, but the premise is so goofy, and the whole cast is so enthusiastically in on the joke, that you never feel like you’re being preached to.  But it’s also smart comedy, so you don’t need to feel silly for enjoying yourself.

“A guy in tights and a cape could say things to another guy that he couldn’t say if they were dressed in street clothes.”

Also funny, but with a whole lot of heart is Kathleen Warnock’s Further Adventures Of… a bittersweet story of a young woman, Maggie Day (Emily Rose Duea), her awakening both as a writer and a lesbian, and the history of the closeted Hollywood actors (Phillip Matthews, James Satter) who helped get her there.  As a little girl, Maggie was transfixed by afternoon reruns of an old fantasy adventure serial called Atlantis 1,000,000 B.C., whose central pairing was a young prince and the soldier who guarded him and kept him safe.  The homoerotic subtext in the writing, and the real life chemistry between the two actors launched Maggie on her own bouts of storytelling to fill in the blanks.  As an adult, Maggie’s writing career leads her to research the people behind the TV show, and what became of them.  Warnock’s script is a marvel of economy, taking us back and forth in time, and from fantasy to reality.  (Honestly, it’s so good, and right up my alley, I wish I’d written it, and that’s the highest compliment I can pay any play.)

“I lost him somewhere along the way.  I regret that more than you can know.”

The whole story is lovingly rendered by director Meggie Grievell and her cast.  Duea is a perfect narrator and audience surrogate.  Matthews and Satter really get put through their paces - playing the soldier and the prince, respectively, as well as the two actors who portrayed them.  They also play Maggie and her childhood friend playing their own version of the Atlantis characters, and the two women later in life at a high school reunion.  They play Hollywood producers, assistants, and elderly TV writers as well.  There’s not much in the way of costume changes (there isn’t time), so the production relies largely on the power of the actors to create new characters and flip back and forth between them in the blink of an eye.  Matthews is a gregarious emotional presence on stage who chafes at limits, while Satter is more reserved, playing the role on screen and in life of a guy who knows the limitations of his talent and is happy just to get the character parts. I have to resist the urge to spoil the whole damn plot for you because it’s such a beautiful heartbreaking story of another time, in another Hollywood that I want to live it again by retelling it, but you should really see it for yourself, because it’s lovely.

“I just wanted to say thank you.  Some of us still remember.”

The one headscratcher in the trio of scripts for Set A is Michael Merriam’s At The Edge of Flight.  And it’s not the weak link because of the script.  Merriam’s play is actually a fun idea, and when the production isn’t fighting it that fun breaks through.  Fallen superhero Melissa Ballister (Valerie Borey) has suffered some kind of “super”-stroke and been knocked out of the sky.  Her healing process at government run rehab facility is hampered by officious Nurse Montgomery (Jody Bee), but helped by good-hearted nurses John (Ian Donahue) and Cindy (Anna Lakin).  Cindy and Melissa’s connection evolves into something more romantic (and, of course, incredibly unprofessional), which gives Melissa the inspiration she needs to push back against her institutionalization.

“Your kind needs to be controlled.”

Sounds like another winner, right?  For reasons that escape me, director Cassandra Snow has decided to set the thing at an absolutely glacial pace, with all the energy of a funeral dirge.  The whole play plods grudgingly from scene to scene in a way that forbids it from attaining any momentum.  Melissa the superhero had a stroke but what’s everyone else’s excuse?  Donahue as Nurse John at least can’t help himself - he’s just a sunny, perky presence on stage.  But he just serves as a starker contrast to the joylessness of a lot of the other scenes.  The rest of the cast isn’t bad.  You get the distinct feeling that they’re just doing as they're told.  Pick up the pace a little and I’m sure they and the story as a whole would be just as fun as that one nurse.  I realize rehab isn’t a lark, nursing homes are often depressing, and some nurses are just burnt out.  But the extra unnecessary layer of grim here often makes you forget that it’s a superhero story at all.  It’s possible something was just off opening night and the thing’ll pick up steam.

“I got to explore my own creation myth.”

Right now Your Princess and Further Adventures are the winners here.  They are well worth the price of admission, and bookend the evening, so you start and end on very high notes indeed.  They help keep the average up to -