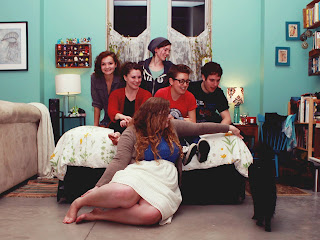 I’ve struggled with how to write about Set B of Gadfly Theatre’s Heroes and Villains edition of their annual geek festival of short plays because on some really basic fundamental level, I don’t get either of the plays that are included.  I want to, I tried to, but I failed.

“When I woke up with blood-soaked hands, I had a smile on my face.”

Normally, I would be inclined to blame the artists somehow, rather than myself as an audience member, but I’ve been running into a lot of theater lately, most of it written by and/or directed by women, that just baffles me.  So I’m starting to wonder if I, as a man, am just not its intended audience, and thus should let both the artists and myself off the hook on this one.

“There’s only so far anger can take you.”

The thing is, I don’t want to let anyone off the hook, least of all myself.  I consider myself a feminist, for any number of reasons - I was raised by and am still fortunate to be surrounded by strong, smart, powerful women; and I’m godfather to a seven year old girl who I want the world to treat well and respect, because she’s brilliant and the world is a better place for having her in it.

“All I know is I wanted to look up and see her beside me.”

So when I see pieces of theater such as the two plays in Set B - Katy Koop’s The Amazing Cunt and Lil’ Bitch Take Minneapolis, directed by Megan Lembke; and Nicole Jost’s Slut directed by Shalee Mae Coleman - I want to find a way to engage them on the level which they mean to meet me as an audience member.  But they both seem determined to confound me in this attempt.

“Please let me play with them first.”

The Amazing Cunt (Sarah Maxwell) and Lil’ Bitch (Alyssa Perau), both survivors of sexual violence, have taken it upon themselves to execute a little vigilante justice on those who would prey upon others.  These others - as well as the reporters and police who dig into their stories - are all portrayed by Justin Betancourt and Cayla Marie Wolpers.  You find yourself wanting to root for the vigilantes and against their victims, but Koop’s play allows no such easy answers - and that’s a good thing.  The play, in fact, opens up a whole host of thorny questions, and then leaves them open and unresolved for the audience to contemplate.  I don’t think a satisfying ending is possible or even desirable for a play like this, so the writer wisely doesn’t even try.

Everyone involved here throws themselves unreservedly into their roles, which is commendable.  There’s only two things that trouble me - one of which is under the production’s control and the other of which is not.  Hard as it may be to watch, I think The Amazing Cunt and Lil’ Bitch Take Minneapolis is crying out to be a longer play, in order to adequately explore all the complex issues it’s grappling with.  In the context of this festival, more time just isn’t possible, so they can’t be faulted for the whole affair feeling abbreviated and unfinished.

The thing the production did have control over was some artistic appropriation that was problematic on two levels.  Lil’ Bitch is outfitted like and sports the same theme song (a wacked-out cover of the Banana Splits TV show theme) as the character Hit Girl from the movie Kick-Ass.  This is problematic because the appropriation is so blatant, it borders on theft.  And it’s also problematic because that character was a 12 year old child.  This play’s Lil’ Bitch is not, of course, a child.  But however adult or well intentioned, using bitch in that context bothers me.

“I want to make sense, but I can’t make sense of you.”

Slut is a play that I couldn’t spoil the plot for you if I tried.  Slut is so aggressively non-linear, you just have to go with it and stop trying to piece it together like a normal story.  As the title might clue you in, prepare for a LOT of sex, both seen and unseen, but definitely heard - and from all reports on the characters’ parts, quite satisfying and consensual.  Plenty of woman on woman, and woman on androgynous man, action to be had.  Lots of caressing and kissing.  Here again, everyone is game for what the script requires and creates the world quite vividly.

“Kindness comes easily to those that aren’t very smart.”

The Slut (Hillary Olson) invites Various Lovers (most of them played by Beckett Love) into her Bed (personified by Suzi Love).  She also has a deeply meaningful friendship with a Taxi Driver (Heather Burmeister), who probably gets the closest to who the Slut really is.  The only person without ready access to the Slut’s bed or heart is Elliot (Armando Ronconi), and this denial in the face of the Slut’s unapologetic promiscuity with others, causes Elliot for some reason to become completely unhinged.

“If you die, what a waste of regret.”

I feel strange having this particular problem with Slut but why is the guy in this play the only one who gets a name?  I guess you could argue that it makes him more ordinary while the other characters are more archetypal and thus larger than life, more important than him.  But that’s not the way my brain processes it.  It seems emblematic of the privilege his character seems to feel is his right and due.  So I may have just answered my own question, and maybe still need more time to process and appreciate the ways the text is screwing with labels and language.  Maybe, like Amazing Cunt and Lil’ Bitch, this script is forcibly reappropriating and unashamedly embracing labels like Slut.

“Rule #7: You must forget one thing about her.”

But honestly, how many times do we have to watch the same character get shot?  And the out of left field transformation/resurrection that consumes the play’s final moments, while it strangely feels earned, still leaves me with the troubling message of:  It’s OK.  This senseless violence is part of some greater good. (When the everyday violence this mimics is definitely not a path to a greater good.)  Also, even the man is allowed here to become a transcendent figure - even though he’s done everything that’s the opposite of earning it.

Maybe, again like The Amazing Cunt and Lil’ Bitch Take Minneapolis, Slut is trying to provoke discomfort and eschew easy answers.  My main worry is that misogyny here is so richly and chillingly portrayed, and then it feels like it wins and is rewarded.  I wouldn’t have any of these problems, of course, if the performers weren’t so good at what they’re doing.  So kudos for making me squirm.

Disturbing and elusive as both these plays were, I have to err on the side of praising rather than dismissing them.  Give ‘em a look and see what you think.  Brace yourself for some non-family-friendly material and you should be fine.