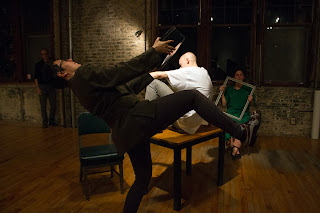 Sometimes in theater you get second chances.  Sometimes an artist will remount a production that, the overabundance of theater in this town being what it is, you miss the first time around.  Such a second chance is Skewed Visions’ Charles Campbell presenting EX(remade). It’s not a literal point by point remounting of the original EX from back in 2014, more a revisiting with the same collaborators, expanding on the themes and work that went before.  It will be familiar, but not a complete repetition for those who saw it before (it’s about a half hour longer - 90 minutes this time, for starters).  It will also not be completely bewildering to anyone, like myself, who had the misfortune to miss the first one.

“When you finally have time to clean out your basement, that’s when you know it’s all over.”

Campbell drew inspiration from the year he lost both his mother (to Alzheimer’s) and his sister (to cancer). Helping family members on the last leg of their journey through life, and then cleaning out the belongings that remain, and the memories that cling to them, ready to be dusted off.  EX(remade), of course, is never that literal.  This is Skewed Visions.  There is movement, there is sound, there are stage pictures that get repeated through multiple variations, there is music, there are words.  But often those words are beside the point.  They are not the focus much of the time.  Skewed Visions asks you to process live visual images as if they were a kind of poetry, the meaning exploding out of the juxtaposition of things that would mean less all on their own.

“My great aunt painted these ceramic shoes. All of them have a mistake on them.”

Campbell gives us the basic context as he hands off the various costume pieces to his fellow performers. EX(remade) is a performance that isn’t shy about acknowledging itself as a performance. So the costumes, laundered and hung up collectively on a hanger under a plastic sheet from the dry cleaners after the last performance of EX, now get released for opening night of the new outing - another level of memory to be excavated.  Campbell gives Annie Enneking his mother’s old green dress - something from her youth he never saw her wear, but something that was packed carefully away among her belongings, waiting to be found after she died.  Campbell gives Billy Mullaney a large white T-shirt worn by his sister in her final days battling cancer.  Campbell gives Megan Mayer a jacket and tie he once used, while outfitting himself in a black fleece.

“Do you remember how we first met?”

Mayer clutches a metal lockbox.  Mullaney picks up a table and holds it over his head.  Campbell holds a wooden chair.  Enneking clings to an empty picture frame.  Leaning against the brick wall is a wooden door with peeling white paint.  These are their icons.  These are the physical items they bond with and return to throughout the performance.  They take on different configurations and meanings.  Other family tokens are taken out of their hiding places, their history recounted, and votive candles lit and placed in the nooks and crannies where they used to hide.  Sound effects that sometimes seem like a storm and sometimes seem like a fire, blend with the noises of real life that sneak in over the transom through open windows.  Birds, and children, and passing traffic.

“That is my sister’s scarf.  Leopard print, of course.”

Rituals of movement are repeated, and as people are lost, we see the next go-round and notice the empty space.  Families gather for portrait poses in picture frames that get progressively smaller.  But when there’s no one around to jockey against for position anymore, you miss them.  An image that I didn’t realize until afterward was an homage to Edward Hopper’s painting "Nighthawks," also kept recurring.  In one sequence, Charles Campbell “introduces the band” talking about his collaborators each in turn, enumerating their talents, and explaining why he brought them into the project as they go about their business.  In another, they each take a turn in the hot seat, even Jeffrey Wells on the sound board, and Charles asks them to do random things or speak to a random subject of his choosing.

EX(remade) is both intensely personal, and universally recognizable.  Taking someone’s hand, carrying someone across the room, engaging in a battle of wills to get them to take their medicine.  Trying to divine an object’s meaning, when the person who gave it meaning is no longer around.  It has a healthy sense of humor (or is it whimsy?), a clinical eye and an open heart.  It’s not overly sentimental, but neither is it cold and detached.  EX(remade) tries both to acknowledge and make sense of the passage of time, while also grappling with loss as something neither good nor bad, just constant.

“I’ve come to hate my body and all that it requires in this world.”

There’s a doozy of a final image that I won’t spoil, but it involves clothing made out of paper (constructed by Alison Heimstead).  Honestly, I could go on talking about EX(remade) or you could just go and see it - and you should, of course.  After all, how many second chances do you get in theater?  Performances at the Fresh Oysters Performance Research space - 512 East 24th Street, Mpls 55404 (same block as Open Eye Figure Theater).  Seating is limited. 3 more performances, next weekend Thursday through Saturday 8pm, June 23, 24, and 25.