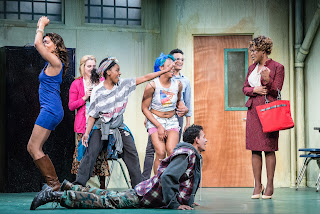 Any play that conjures Emily Post up from the afterlife in the body of a trans person can’t be all bad.

“Have pity on the straight people, baby.  They get confused.”

“Don’t you just feel like a whole new you, instead of a ho you knew?”

I also didn’t realize until after the show that the playwright for Charm, Philip Dawkins, was also the playwright on Failure: A Love Story, a 2014 Fringe show that I loved quite a lot.  Charm is a very different play from a number of angles but the same talent is at play in this script as well.  The ensemble of Charm is a big noisy cast of nine characters - all individuals unrelated to one another introduced in a classroom setting.  It’s a credit to the cast that they all quickly present their characters to the audience as fully formed people cobbled together out of snippets as the play furiously juggles all the characters to give their subplots something akin to equal time.  It’s a tough task in this “teacher and student” context and the cast, under the direction of Addie Gorlin, often succeeds at this task more effectively than the play itself does.

“You make the transition from the painful realization that everyone’s looking at you to the uncomfortable truth that no one sees you anymore.”

Mama Darleena Andrews (Julienne “Mizz June” Brown) has volunteered her time to teach at a local community center that serves at-risk and gender non-conforming youth of all sexualities, many of them also homeless.  The center is run by the beleaguered D (Meighan Gerachis), a bit worn down by the day to day realities of the community they are serving with limited resources. Mama wants to teach the young people etiquette, following the rules of the late Emily Post.  Now, the gender norms Miss Post was enforcing in her day are a lot more fluid in 2016.  That fluidity running up against such rigid rules can make for some confusion, and some friction.  Also, of course, a lot of comedy.  When you don’t know where your next meal is coming from, or your next kind word, charm school can seem like a luxury on which you can ill afford to waste your time.  And getting the kids to behave in the classroom is a far cry from getting them to treat each other, and themselves, better out in the real world beyond the community center’s walls.

But the young people are intrigued by Mama, a trans woman of color who’s made it to the other side of 50 in a world that doesn’t have good odds for that happening.  Fabulous streetwalker Ariela (Rehema Mertinez) is especially drawn to Mama, lobbying hard for the role of teacher’s favorite - and a little jealous and spiteful to anyone who gets in her way.  Ariela’s opposite is Beta (Jay Simmons), a sullen and quiet gang member who sits in the corner wearing clothes so non-descript it’s hard to tell who they are.  Victoria (Jennifer Waweru) and Donnie (Ryan Colbert) move as a unit, a couple bound by the children and history they share together, but always on the verge of being pulled apart.  Lady (Jay Owen Eisenberg) is a nervous, spastic soul who has a hard time connecting with others.  Logan (Nathan Barlow), a gay college student, drops in just to get a taste of how the other side lives, but ends up staying to pursue a relationship with Jonelle (Alyssandra Taylor), who fills out their paperwork as a boy but presents as a girl.

“I just wish there was someone I was enough for.”

Though the play could sidestep the rough edges of its characters and their lives, to its credit, it doesn’t.  However, the characters nearly all headed down some dark paths of their own does make that happy ending seem a bit more jarring.  Is it nice to see them all together at the end?  Sure.  Does that mean their lives are magically fixed?  Of course not.  Does the fact they have to go back to those lives of struggle negate the loveliness and warmth of this one moment in time on which the play chooses to close?  No. But it doesn’t feel like the play or the production is necessarily presenting that happy ending with the tenuousness that surely accompanies it.  It’s almost as if we in the audience, like Logan the college student, have the privilege to go slumming for a little while on the wrong side of town, and then get to quickly return to our safe and sheltered lives - and think no more about it.  Are we better for the visit?  Yes.  Are we also using other people’s misfortune and hardship as our entertainment, secure in the knowledge it isn’t really going to touch us?  Maybe.

“To expect perfection is rude.”

It’s good that Charm has me asking these questions.  It’s good that Charm is making me uncomfortable.  It’s good that Charm is presenting these characters to audiences, giving them a platform and a voice.  I just worry that because there is so much getting crammed into a single play, no single element of the play is getting a fair hearing.  Any one or two of these characters in any combination could easily be their own play.  Charm draws them all quickly and deftly, but I wonder about the depth.  For instance, one character presents themselves and their life in a certain way for the first two-thirds of the play, and then suddenly tells us that it was all a lie.  OK, then what’s the truth?  The play lets that slide.  So the character we thought we knew just turns into a cypher that is never fully explained by the play’s end.  We know them less well after spending two hours with than we did when we started.  That seems like a poor use of a character, an actor, and stage time.  Charm does this, to a lesser extent, with every one of the characters who are all fighting for their moment in the spotlight so the audience can see them better.  Charm often seems like a lot of set-up with little ultimate delivery on its introductions.

“Thank you for correcting me.  Names have power.”

Still, just to get a cast of this many gender-fluid and sexuality-fluid characters (and actors) of color on the same stage together is notable all by itself, and well worth seeing.  Charm is not like anything else you’re likely to see on stage this year.  And you can see it at Mixed Blood for free (because of their Radical Hospitality program).  So what are you waiting for?  (You already know you’re going to get laughs and a happy ending)