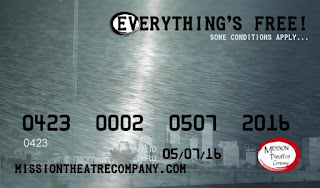 What if someone offered you a credit card with an unlimited balance that you never had to pay?  What would you do with that purchasing power?  What if one of the only conditions of receiving this card was that you could never let anyone else know you had it or were using it?  Could you keep your mouth shut?  Could you live in a a way that wouldn’t arose suspicion?  When our capacity to do good runs up against our capacity for selfishness, which side wins?

“The human dream only lasts nine seconds. That doesn’t leave us much time.”

These tantalizing questions, and many more, are floating around inside local playwright Sam Graber’s new play Everything’s Free, commissioned for a world premiere by Mission Theatre Company.  Being familiar with a lot of Sam Graber’s work, I have to say this is one of the strongest scripts I’ve seen from him.  Clocking in at only about 90 minutes, using only a handful of characters, Graber manages to cover a lot of ground and offer up a lot of food for thought to the Mission Theatre audience.

Opening night was unfortunately also the day we all learned that Prince had died, so a lot of people were naturally preoccupied elsewhere.  The audience that showed up for Everything’s Free just barely outnumbered the cast of five.  To their credit, the actors went full out, as if the nearly empty room was instead a packed house.  The small crowd responded in kind, all very much keyed into the concept and story of the play.  I hear audiences since then have been quite full, which is good news.  This script and this production deserve to be seen by a lot more people.

“There have to be jobs.  Just walk to the tall buildings and ask.”

I have to be careful here not to spoil too much of the plot.  What I can safely say is that Tyler (Jake Rivet) and Mackenzie (Tynelle Marschall) are a young couple, fresh out of college, and fresh out of small town America, come to the big city of Minneapolis to make their mark and see what the larger world has to offer.  They think that people in their 30s are old, and that going back home would be a fate worse than death, but they also aren’t too adept at living hand to mouth.  Mackenzie calls herself an internet artist, and is somehow actually generating income - both of which struck me as being more fantastical that a lot of the genuinely weird things that happen in the play.  You could be forgiven for perhaps wanting something bad to happen to these two.

Introduced alongside Tyler and Mackenzie are Clutch (Corey DiNardo), inexplicably wearing a bowler hat, and his companion Eula (Anna Sutheim), swathed in the multiple layers that make surviving a Minnesota winter possible.  Eula also seems a bit fixated on Tyler, which unnerves him, even as Clutch throws his money around to keep the good times flowing for his newfound friends.

“I can almost taste the smiles of people.”

In short order, Tyler also comes into some money.  What he chooses to do with it is surprisingly altruistic.  But as Tyler and everyone around him soon discovers, if something’s too good to be true, then it probably is.  The way things unravel and how the nightmare is resolved make for an unusual journey for characters and audience alike.

There’s a twist I won’t spoil near the end that almost seems like a cheap writer’s trick, but then turns around again to leave things a bit more open-ended and potentially ominous (you know, the kind of ending that would feel at home at the end of most typical episodes of The X-Files).

Outside the central foursome, Eric Balcerzak moves around the borders of the action of the story, only really having a chance to insert himself as a character when he takes on the role of a doctor doing charitable work with homeless people.  Since we have plenty of avarice among the main quartet, it might be nice to see some more of this, or similar, characters to add some balance and contrast as the script develops.  Just a single appearance by the doctor opened up the world of the play and grounded the strangeness of the premise in our everyday reality - which just ended up making it all that much more unsettling.

“There’s no advertising in homeless people freezing to death.”

Director Anneliese Stuht trusts Graber’s script and the performances of her actors to be enough the carry the story.  Everything’s Free is a fairly barebones production.  Obviously as you can see from the above, Krista Weiss’ costumes made an impression on me.  A nod must also be given to the lighting, sound and projection designs of Ben Harvey.  There’s one particularly evocative image in Graber’s script near the end, of dispossessed people each hanging by a thread in the moonlit nighttime sky, which Harvey actually delivers.  It’s as unsettling as it is beautiful, and for all that also remarkably simple in its execution.

“Everyone’s living on the street these days.  They just don’t know it.”

For some reason, I found myself wondering about why the production was so white. Nothing in Graber’s script seems to preclude actors of color.  In fact, mixing it up a bit might allow the story to seem less like a cautionary tale just for self-involved, entitled white folk.  Right now, the homogenous population of Everything’s Free makes it just a little easier to dismiss than I think it should be.  The performances here were all fine, however.  Sometimes it seemed like there were only two volume settings, though - reserved or shouty.  Some extra levels in between might have been useful.  The one cast member who skirts this problem rather nimbly, and had me wishing for a little more nuance across the whole story, was Sutheim as Eula.  She always seemed to have just the right mix of allure and menace. She takes the strong material in the text and really runs with it.  Is she more than human or less than human?  See and decide for yourself.

“You should reconsider your tone.”

We don’t get a lot of original storytelling along the lines of Everything’s Free all that often.  While we all work to change that, catch this new play while you can.  If you’re like me, you’ll probably find it unnerving and inspiring in equal measure.  Congratulations to Mission Theatre on given this new script a proper birth.