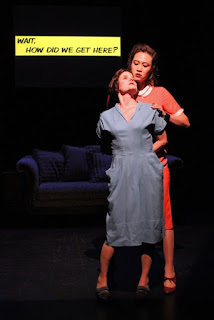 It’s not often the run crew gets called out on stage to take a bow with the cast at the end of the play, but with Lasso of Truth, it’s warranted.  And I don’t say that lightly.  The cast of Lasso of Truth is first rate - Annie Enneking, McKenna Kelly-Eiding, Meghan Kreidler, John Riedlinger, and Stephen Yoakam.  The cast is so good, and so stuffed with recognizable names from the Twin Cities theater community, it’s almost not fair to the other plays being produced right now.  I’m gonna have to make a guess here, but it looks like the two man stage crew was Isaac Arreguin and the assistant stage manager Mitch Swanson.  Why did they get a curtain call?  Well, Erica Zaffarano’s lively set for Lasso of Truth is almost another character in the play.  There are two rolling wall pieces (you couldn’t really call them screens) that might actually have more blocking than a lot of the actors.  Scenes are obscured then revealed from behind these walls as the two threads of the plot barrel along. If the crew wasn’t timing things just right and hitting their marks just so, the production wouldn’t work.  And the actors clearly know that.  You can see in the way the cast and crew look at each other, they’ve been through the wars, they’ve bonded.

“How can you tell when someone is lying to you?”

The set with a life of its own isn’t the only thing which sets Lasso of Truth apart from your average stage play.  Since Carson Kreitzer’s play explores the origins of the comic book superhero Wonder Woman and the life of her peculiar male creator, the play in its structure and this co-production of Workhaus Collective and Walking Shadow Theatre Company both embrace that comic book style.  There are some truly wonderful illustrations by Jacob Stoltz woven generously throughout the evening projected on three screens behind and above the action.  These comic book panels add detail, information, and punctuation (often comedic) to the story, making it seem a bit larger and more vibrant than life.

There is also a humorous side plot commenting on the action featuring Gloria Steinem writing a forward to a collection of Wonder Woman comic book covers.  The snippets that make up this side story are filmed and then given a comic book style coloring overlay making them that much more fun to watch.  The filming and editing was done by Daniel Benoit and the projections designer for the production was Davey T. Steinman.  There was also a cheeky but informative preshow video done by Kwame Brown running in a loop as the audience filed in and took their seats which helped give the show some helpful context.  Given the style of this production, under the direction of Leah Cooper, it’s hard to imagine the show working as well, or at all, without all the different varieties of visuals helping to prop it up and flesh it out.  Abetting all this visual and physical trickery, of course, are the added design elements of light and sound, designed by Michael P. Kittel and Dan Dukich respectively.  And though there were a couple of minor glitches opening night, one can hardly fault the board operators Jason Hanson and Damon Mentzer.  Like stage manager Mawrgyn Roper, the stage crew, and all the designers here, they have their work cut out for them to keep Lasso of Truth clipping along smoothly with all its many moving parts.

“The tickle at the edge of your brain.  Do you ignore it because you don’t want to know?”

Let me say this up front: I love Carson Kreitzer’s writing.  I love her style.  I love her way with words.  I love that even here, where the story is ostensibly focused on the man behind Wonder Woman, she finds a way to make it even more about the women in this man’s life, and how they inspired him as well as his creation.  I also love that in Lasso of Truth, unlike a lot of her other plays, there isn’t some incredibly dark turn that then paints the world as such a bleak place you wonder how the playwright gets out of bed in the morning.  All that said, Lasso of Truth is kind of a disappointment.  While I applaud, and even at times thrill to, the play imitating the visual style of a comic book in its structure - brief scenes centered on a single visual picture, like panels in a graphic novel - the content inside those panels is missing something.  They are often as flat as a two dimensional image.  The depth and human emotion is missing.  This, despite compelling performances by all involved.  The whole cast works hard to imbue the skimpy story with meaning, to put some meat on the play’s bones, but there’s only so much they can do.

Kreitzer is blatantly trying to have it both ways, and says as much in the author’s note in the program.  Lasso of Truth both is, and isn’t, about William Moulton Marston, the creator of Wonder Woman, and the creator of the polygraph (or lie detector) machine.  But the characters in the play are “fictional characters inspired by real people.”  Kreitzer, as any good writer does, takes the details she finds useful (not being bound by the rest), creates her own emotional truth around them, and makes her own world on the page.  The tension here is that even though the characters are listed as - in the past - The Inventor (Yoakam), The Wife (Enneking), The Amazon (Kreidler), and - in the present - The Girl (Kelly-Eiding) and The Guy (Riedlinger) - there are very specific non-generic references to the source material invading the play from a couple of directions.  The modern day Girl is obsessed with the particulars of the different iterations of Wonder Woman in popular culture (such as the successful Lynda Carter TV show).  Gloria Steinem on film (also Enneking, delightful) digs into both the sometimes troubling evolution of Wonder Woman on the comic book page and the unconventional sexual proclivities of Marston in real life, wondering aloud how the creator’s behavior influenced or reflected on his creation.  All the specifics in those two threads of the story seem to undercut, and make unnecessary, the coyness in other areas of the script just so perhaps the author still feels they have the room to take whatever dramatic license they wish with the characters and their lives.

“You may be used to being the smartest guy in the room, but that’s over.  I’m here.”

The main trouble I kept having as I watched was that nothing hung around long enough to have any impact.  In the present, our modern day Girl alternates between talking about Wonder Woman, telling stories from her past involving people we’ll never meet, and badgering a modern day Guy who runs a comic book store until he shares with her his vintage comic which contains the first appearance of the character of Wonder Woman.  This last quest results in - nothing, as far as I can tell.  After all the build up, we don’t get to see the comic.  Neither do we learn what, if anything, in this Wonder Woman debut has an impact thematically or personally for the Girl and Guy.  Yes, it’s a turning point in their relationship, but it sidelines the comic book (and Wonder Woman) into being more of a  maguffin.  No payoff.

“I mean, how long do we expect this to last?”

That story as a whole is rendered in miniature time and time again in the scenes from the past where the Inventor, the Wife and the Amazon (the third in their polyamorous relationship) are repeatedly launching themselves into scenes that end abruptly without achieving anything.  Most of them start something like “Hello darling, let me share with you this little piece of exposition which will establish where we are in the timeline of our story and the history of America.  And now… oh, I’m sorry, we seem to have run out of time before we could really speak to one another.  Look at that shiny thing over there!  On to the next scene we go!” No one is allowed to exist in one place and engage another character for more than just one or two minutes at a time.  The actors all do their best to imbue these scenes with a sense of character and gravity and consequence but they don’t really seem to have enough to work with.  Comic books have more sustained explorations of their characters than this.  Lasso of Truth is more like a set of snapshots with captions than pictures that are conveying a narrative.  What’s the story and why are we watching it?

“No one else has to understand.  It’s enough that we do.”

Even saying all that, there is a certain amount of fun in just watching the artistic team band together in service of the script and just go for it.  It’s certainly not boring.  It never sits still long enough.  I’m not sure what all the component parts of Lasso of Truth add up to in the end, but it’s a wild ride getting there if you just give over to it and hang on tight.  In a way, Lasso of Truth is a fitting send off for Workaus Collective, which is shuttering operations after this production.  Workhaus was always about serving the script, giving the writers an opportunity to take chances and get new work out in front of audiences.  The work itself may have been a mixed bag, but no one ever played it safe.  Workhaus’ producing partner Walking Shadow continues on after this, of course.  Walking Shadow’s love of new plays should help fill a little of the void Workhaus is leaving behind.  Lasso of Truth is a good way to say goodbye.