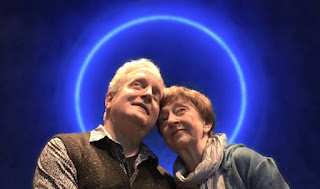 I find myself torn when I think about Nautilus Music Theater’s production of The Fantasticks.  The show is chock full of incredibly talented, seasoned performers (but then, that’s not at all unusual for Nautilus).  The show is also brimming over with one beautiful, memorable song after another.  Since it had been about, oh, thirty years since I’d seen a production of this piece, I’d forgotten just how many songs I knew from The Fantasticks.  I repeatedly found myself thinking, “Oh, that’s where this song comes from.  And this song.  And this song.  And this song.”  There’s a reason the thing is so durable.  Not only does it have a wealth of great material in it, it’s one of the original black box musicals.  It’s incredibly simple to stage because it blatantly engages the audience’s imagination by having the characters ask for it directly.  Fourth wall?  What fourth wall?  Every self aware piece of musical theater that’s come along in the last 55 years owes a debt to The Fantasticks.  If you think you’ve seen the tactics used before, it’s because you have.  This is where everybody else learned them.

“What at night seemed oh so scenic, may be cynic in the light.”

Nautilus has also put their own particular spin on the play by making it less a meditation on the way youth loses its innocence, and more about what love looks like from the opposite end of the age spectrum.  The “young” lovers are played by real-life married couple Gary Briggle and Wendy Lehr, two stalwarts of the Twin Cities theater scene over many decades.  The term “mature performer” is a fair one to apply here.  And perform they do.  Briggle is especially impressive because the man still has the lung capacity many a twenty-year old (who would normally get cast in the role of young lover Matt) would envy.  He can hold a note so long you start to wonder whether he’s human.  Most mere mortals don’t have pipes like that.

Speaking of amazing pipes, Nautilus’ Artistic Director Ben Krywosz had another little bit of fun with casting and put the Baldwin sisters (Christina Baldwin and Jennifer Baldwin Peden) in the role of the fathers to the young lovers - Christina being Bellomy, Wendy Lehr’s father, and Jennifer being Hucklebee, Gary Briggle’s father.  Not only were women playing male roles, they were decidedly younger than their characters and the actors who were supposed to be their children.  But oh those beautiful Baldwin voices.  Rounding out the cast was William Gilness in the narrator role of El Gallo, and Brian Sostek was the wacky ham actor who is central to the elaborate plot to get the young lovers together.  (Sostek also serves as choreographer and fight choreographer.)  The mini-orchestra consisted of music director Jerry Rubino on piano, and Andrea Stern on the harp.

“I say they’re only young once.  Let’s get us a first class abduction.”

The plot of The Fantasticks is pretty simple.  Matt and Luisa fall in love.  Matt and Luisa are pulled apart by circumstance.  Matt and Luisa find their way back to each other, just a little bit older and wiser.  Their fathers, who Matt and Luisa thought were trying to keep them apart, were actually only putting up obstacles so that the children would work that much harder to fall in love just to defy their parents.  The final flourish to this fatherly plot is enlisting El Gallo and his sidekick to stage a fake abduction of Luisa from which Matt can rescue her.  It’s only because happily ever after doesn’t seem as exciting that everyone drifts apart and then must find a way to reunite.

“Try to remember when life was so tender that no one wept except the willow.”

The concept behind the production was to put older artists in traditionally younger roles to add a different perspective to the story.  The same with the decision to go with women in traditionally male roles.  Having seen The Fantasticks through this lens, I’m not entirely sure it works.  The play seems to resist reinterpretation and commentary placed on it.  It seems to be resolutely a product of its time, and that time was over 50 years ago.  The music largely transcends time - the songs, and the talent of the performers here, make for an absolutely gorgeous piece of musical entertainment.  The script is another story altogether.  The fact that the abduction used to be referred to as a rape (which, in the classical sense, isn’t incorrect usage) was so problematic that over time the script was altered to not run afoul of more cultural sensitivity around the word.

“Just once before I’m old.”

The fact remains that it’s a fairly immovable story of white male privilege.  Written by two men, it makes much of the fact that the girl is 16 and the boy is 20.  So the entire time I’m sitting there thinking “statutory rape” in the back of my head.  Then there’s the whole notion that the boy must strike out and see the world, while the girl is simply waiting for some man, any man, to make her life complete.  He will be her adventure.  Add to that the ethnic stereotypes flying around El Gallo and his sidekick as they stage the abduction, then later take the lovers on a whirlwind tour of how American culture sees everyone else, and well… I got uncomfortable pretty quickly and stayed that way.  I was surprised as anyone that this was my response coming back to a musical I remembered so fondly from my teenage years.  Some scripts just don’t age well.  You can say it’s all just meant in fun, but fun at whose expense?

“Their moon was cardboard.  Fragile.”

With all the talent onstage, and all the beautiful songs, you can’t really be mad at the production.  When the music is front and center, for the most part, the production is on solid ground.  Is The Fantasticks lovely and entertaining and enjoyable?  Absolutely.  Is it necessary?  Probably not.

You can argue that all art doesn’t need to have a purpose.  But I’d argue that it needs a compelling reason for being.  Just looking at the random sampling of things I’ve seen in the last four months, the ones that are most successful are the ones that are tapping into something in the zietgeist.  Given the political upheavals going on right now, productions as different as Tamburlaine and Julius Caesar can’t help but feel a bit more urgent.  Given the bewildering battles over bathrooms, marriage and civil rights for the LGBT community, a production like June is a timely reminder of a former era we’re always in danger of slipping back toward.  On the flip side, a production like Everyman provides a window into the belief system of people who feel compelled to insert themselves into other people’s personal lives.  Given the general feeling of personal unrest and displacement in so many quarters, disparate tales such as The Beauty Queen of Leenane and The Aliens illuminate the sometimes desperate struggles of people who feel trapped in lives that are too small for them.  Productions like You Bring The Party and Semester, Lecture 1 look to unpack the very structure and purpose of the performer and audience relationship, questioning the validity of live theater itself.

So what exactly is The Fantasticks bringing to the table?  Escape, I guess, if that’s what you’re looking for.  Most of the songs still hold up remarkably well, and here they are performed better than you’re likely to see anywhere else.  For that reason, I can’t give the production any less than 4 stars.  As a piece of musical theater, Nautilus, as usual, executes the show flawlessly.  But the script is a relic.  If it were the songs alone, it would be a 5.  The framework that the songs live in is looking a little the worse for age.  The performers are aging far better than their material.  (Tickets are, quite rightly, rapidly selling out, so I shall do them no harm in saying this.)  Go for the singing, and when the book kicks in just trust that the next beautiful song is always right around the corner.