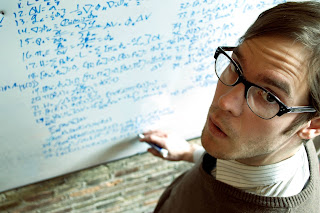 If I told you that you would consider the delivery of a lecture on relativistic quantum field theory to be entertainment, you’d think I was strange, right?  Well, thirty people turned up to see Billy Mullaney do just that, so he must be doing something right.  He ran out of chairs, so people took to standing at the back or seating themselves on the nearby flight of steps in the Fresh Oysters Performance Research space.  Mullaney seemed genuinely surprised that so many people showed up to watch him do this.  I wasn’t.

“Now we can define creation and annihilation.”

As with any Billy Mullaney project, Semester is a strange beast.  Mullaney isn’t really presenting the lecture himself, in a strict “instructor imparting knowledge to a student” sense, because he has no idea what he’s saying.  He’s not performing, per se, either, because he’s not pretending to be a professor who is educating a class.  It’s sort of like watching someone present something to you in a language that isn’t your own, and on top of it, the language isn’t the performer’s own either.  Neither of you understand, in a literal sense, what is being said.  Someone who did understand the subject could probably translate it for you, but that person is not present here.  When I first saw Mullaney present an excerpt from this as part of his Uncreativity Festival last year, I said it had “its own little dance of language and symbols that had its own sort of beauty out of context.”  That still holds.

“Having done this we can now proceed with the continuum theory directly.”

Because it’s not just Mullaney reciting the verbatim text of a lecture on “quantization of the free scalar field.”  He’s also writing out all the equations involved on a white board as he speaks.  The challenge of not being in a lecture hall with a multitude of white board space is partially solved by the fact that, part way through the lecture, when his first white board is full, Mullaney simply swaps that white board out for a fresh one, keeping the other nearby for reference.  (No doubt the money audience members put into the fish bowl by the door will go in part to obtain still more white board space and more erasable markers.) (In the brief talkback afterward, one audience member - who might have understood the subject matter a bit better than I - tweaked Mullaney just a little for the cramped quarters of some of the equations, and his handwriting.  More white board space would help both those complaints, I think.)

“The only possible equation in the curly brackets vanishes.”

It’s an odd kind of exercise your brain gets when watching Semester because the mind can’t help but try to assemble some kind of meaning even out of something it has no hope of fully understanding in this context.  You start to see and hear patterns in the things Mullaney is writing and saying.  You also start to appreciate the flow of his hand, and by extension his body, across the white board space, in the space that traditionally a professor would inhabit.  Then the thought suddenly occurs to you “there are people much smarter than me who actually do understand this - they understand this language, it means something to them.  They derive knowledge from this and build to further knowledge.”  We all have our languages specific to the worlds we live in, and this is one of them.  I’m sure some theater terms are equally impenetrable to non-theater people.

“I think the whole thing is the fabric of space time but I’m not sure.”

One of Mullaney’s non-artistic occupations is that of tutor for high-level math and standardized test prep.  So he’s a lot closer to the understanding of equations in, say, algebra or calculus than I am anymore, since I left my elementary and middle school days behind me long ago.  He knows the construction of the language, and the cadence of how you present it.  He’s also understandably cynical about how children these days are required to “perform” knowledge, with little regard for whether a student actually understands or incorporates that knowledge into their life.

None of that cynicism is on display here, though.  It might have been the genesis of the piece, but Semester is sort of a strange little valentine to the human mind.  Space and time and the building blocks of the universe are all bound up in these multi-level equations.  Humanity has wrestled what once seemed mystical and unknowable into lines of symbols allowing us to bend and twist that knowledge into something on which we can build.  Build what, for what purpose?  I don’t know.  But the scientists and mathematicians who do know, they need a foundation to step on to reach the next level.  This lecture is one of those foundations.  And while I still don’t understand it, it’s fascinating to watch that knowledge dance in front of me for a while, just outside the grasp of my comprehension, and feel my mind reaching for it - because that’s what minds do, when they’re invited.

“It’s just another way of knowing.”

Billy Mullaney recently started memorizing lecture number two for this course.  His plan is to have a whole semester’s worth, hence the project title.  The next time one of these Semester lecture performances rolls around, you should see it.  I can’t adequately describe it, and it’s like nothing you’re imagining.  It’s worth the time spent out of your everyday knowledge zone.