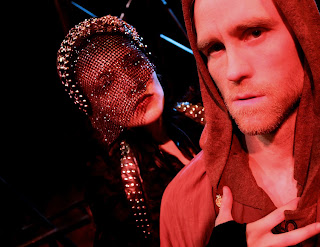 (Fair warning: I go down a theological rabbit hole toward the end of the review, so if you just want to know, up front, whether you should go or not, the answer is yes.)

The friend who attended Open Window Theatre’s production of Everyman with me was kind of surprised by the choice of script.  “Who does Everyman?  What’s the audience for Everyman?”  The answer, of course, is Open Window, and Open Window’s audience.  It’s also for the dramaturgically curious, since Everyman is a seminal work in the Western theatrical canon, the best example of the old-school morality play, straight out of the fifteenth century.  It’s an allegorical play, so people get to take on characters with names like Beauty and Strength and Knowledge, also Death and Discretion and Angel.

The most striking (and welcome) element of Open Window’s production of Everyman is its diversity.  This is easily the most inclusive cast I’ve seen on the Open Window stage.  Actors and characters of color have appeared before (and will again in their intriguing spring show Best Of Enemies - about the relationship between a leader of the Klu Klux Klan and an African American civil rights activist).  Here, though, in Everyman, race both is and isn’t the point.  To further drive that home, five different actors in the cast take on the role of Everyman in the various stages of his/her journey.  So Everyman is male and female; white, black, brown and yellow.  This is presented without comment, so I almost feel wrong on some level calling it out.  But this bold choice not only works, it makes Everyman more meaningful, and is one of the key reasons why the production is so worth seeing.  (Yes, Everyman starts out white and male and returns to being white and male at the end, and of course we live for the kind of art in which this is finally a non-issue, but we’re not there yet.  Let’s applaud the big steps on the journey when they’re put in front of us.)

This approach was reinforced by a sparse modern look for the production - the pipes, ramps, stairs and platforms of Justin Barisonek’s set design, and the mix of ancient and present day in Josette Elstad’s costume design, both shown off to great effect by Courtney Schmitz’s lighting design.

Everyman (beginning and ending as Corey Mills - in between Nicole Goeden, then Kiara Jackson, then Elohim Pena, then Joann Oudekirk) is out partying and boozing and screwing around when he gets an unwelcome visitor - Death (Sharayah Bunce).  Death has been sent by God (the singing voice of composer/musician Kurt Larson) to start Everyman on his final journey, and give him the advice to change his ways while there’s still the tiniest bit of time left to redeem himself.  Everyman’s friend Fellowship (Pena again) is understandably reluctant to join him on a one-way trip to the afterlife.  Everyman’s cousin (Nate Gebhard) and kindred (Oudekerk again) are similarly not up to the challenge.  All the possessions and worldly Goods (Gebhard again) Everyman has acquired won’t really help him here in the home stretch.  Everyman’s Good Deeds (Bunce again) would like to help out, but Everyman has done so few good deeds in life that it’s hard for old Good Deeds to have the strength even to stand up, much less tag along on the journey.

Everyman works to balance those scales along the way, racking up the spiritual brownie points needed to get Good Deeds back on her feet, and also to gather around him Beauty (Goeden again), Knowledge (Siddeqah Shabazz), Strength (Jackson again), Discretion (Gebhard again), and his Five-Wits (Pena again).  Naturally, the closer he gets to his life’s end, the more that things like strength, beauty, discretion and his five wits all must abandon him.  Will this last minute change of heart and behavior be enough to get him into heaven?

One of the nice things about Everyman is its brevity.  One act, 90 minutes, no intermission.  You’re out in time to find a local restaurant and sit with your friend and chew over what it is you just saw.  And Everyman’s the kind of play you want to talk about afterward.  My friend had two issues with Everyman, both of which I understand but for both of which I also have an explanation.  First, he didn’t think there was any suspense involved.  The basic premise is that the guy is going to die, and he dies.  There’s no last minute reprieve.  I’d counter with the notion that Everyman is more about what happens to the guy after he dies than whether he’s going to live or not.  The final disposition of someone’s immortal soul is a tough sell these days as stakes to hang your play on - as Classical Actors Ensemble’s recent production of Doctor Faustus also made clear.  But it’s also just the kind of thing that Open Window’s audience base, looking for theatrical entertainment with a Christian foundation, can get invested in.

Second, my friend felt Everyman didn’t have very far to go for redemption, since he didn’t appear to be misbehaving all that badly in the beginning.  Corey and Betsy Mills of SPARK theater + dance did the movement choreography of the production, which helps the audience get into that allegorical journey frame of mind.  The opening sequence does imply a lot of drinking, and also multiple female partners for Everyman, but I can see my friend’s point, in that the presentation is so stylized, it doesn’t pack the same punch that a more gritty realistic approach would get you.  That latter approach would definitely provide for more contrast.

But here again, with Open Window, they’re very deliberately not doing that, as part of their mission. Family friendly is their thing, number three on their list of seven key things is “We believe that we don’t have to be vulgar in order to produce good theater and that some things are better left to the imagination.”  Elsewhere they say, “We want to produce theater you can believe in, so you don’t have to worry about what you might experience when you walk through our doors and so you leave wanting to come back for more.”  Some people would argue that’s not challenging your audience, that’s not showing them the reality of the world we live in.  But then number two on their top seven list states: “We believe that good art should challenge people to be better.”  And number four further decrees “We believe that good art – in exploring the problems of the human condition – should possess a redemptive value and should always respect the dignity of the human person.”  So you’re only going to get so much of the human body, and you’re only going to get so much of the human condition.  Everyman at the start and finish is naked from the waist up, and the knees down - but in between there are boxer briefs.  He’s the only human showing off that much skin.  That’s just Open Window.  Like many a church, Open Window is a refuge from the world (and standard entertainment), while not entirely abandoning discussions of the hard issues that get dealt with in the world.

It’s the strong Catholic roots that run through Everyman which I had more of a problem processing.  It had been so long since I read the play back in college or grad school that I’d forgotten some of these specifics. Again, completely appropriate for Open Window, that’s their tradition, it’s where their people come from.  My religious upbringing was different.  So the sequence late in the play where there’s an extended discussion of how the priests intercede between the affairs of God and human beings, how they are considered even above the angels, was a bit much for my taste.  On the Protestant side of the fence, where my parents are ordained ministers, and where I grew up, the pastor was important and the leader of the church, but everyone had their own direct line to God.  There also wasn’t the whole tradition, again important here in Everyman, of confession and absolution.

The thing that really nagged at me was the discussion of Good Deeds.  Everyman’s Good Deeds are the thing that accompany him into the afterlife.  They are the thing that appears to ensure his entry into heaven rather than hell.  It’s kind of a fuzzy point in the play and the production, and on a certain level it’s splitting hairs.  There’s talk of grace in the program, as well as the belief that faith cannot just be something you say you believe, it has to be something you do.  You have to back up your words with action.  Christians are supposed to live by example.  They’re not supposed to be going to church on Sunday just to get forgiveness for all the bad things they did the rest of the week.

But the idea of grace isn’t really referenced all that much in the play.  And grace is kind of the whole point.  Everyman the play makes a lot of all the things humans can do - going to priests, doing good things - to improve their chances at a decent afterlife.  But you can’t have a Christian without Christ.  If you go with the Old Testament of the Bible, humankind screwed things up, there was no unringing that bell, so they needed to be forgiven.  So in the New Testament, God offered up his son Jesus as a sacrifice so that all people could be forgiven.  Believe in Jesus, receive grace.  Your own human good behavior is irrelevant.

The program for the production name-checked James and Galatians but I’m going to thrown a little Ephesians on the pile: “For by grace are ye saved through faith; and that not of yourselves: it is the gift of God: Not of works, lest any man should boast” (Ephesians 2: 8-9).  So while “do good things” is certainly a laudable and necessary message to broadcast in as many ways possible, let’s not get too pleased with ourselves.  You can do all the good you want, but without faith and grace (forgiveness), that happy ending with the Angel probably isn’t happening.

To an audience not the least bit invested in this sort of thing, this is really a side argument to whether the production works or doesn’t work.  To the standard Open Window audience, and random outside audience members of faith like myself and my friend, it’s something in which it’s way to easy to get wrapped up.  We talked about this a lot after the production finished.

Even though the text is hundreds of years old, Open Window Theatre puts a fresh new spin on and a lot of energy into the story of Everyman.  It’s definitely more religious than your average play, but it’s got a simple message of redemption that’s well worth hearing. (runs through March 20th)

Thanks. I enjoyed reading this.