Review - Tamburlaine - Sheep Theater - When You Like Your Politics Brutally Funny... - 5 stars 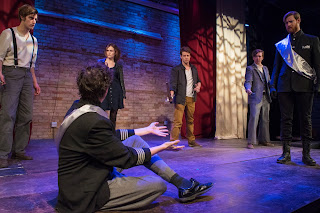 Well, that’s gotta be the easiest that a reboot of a Christopher Marlowe play’s gone down in a long time.  Normally, if you’d told me someone was doing their own version of Tamburlaine, I would have been ambivalent.  But the collaborators on this project have never let me down before, so I figured I’d give it a go.  And I’m very glad I did.  Add Sheep Theater (the cheeky brainchild of Joey Hamburger, Iris Rose Page, and Michael Hugh Torsch) to the list of young theater companies I want to follow very closely over the coming years.  If the energy and creativity behind Tamburlaine is any indication, Sheep Theater is liable to take off like a rocket.

Do you need to know anything about the original Christopher Marlowe version of the story of Tamburlaine to follow along or enjoy Sheep Theater’s version, penned by Joey Hamburger?  Nope.  At least I didn’t.  I will freely admit that, though I have a collection of Marlowe’s plays on my bookshelf, and I’ve read a few, Tamburlaine is not one of them.  Will extreme theater nerds with a Marlowe fixation probably get a few of the jokes that sailed right over my head?  Knowing Hamburger as a writer, I’m sure they’re in there.  Might this reimagining also give those Marlowe devotees fits?  While I think that’s also likely, Sheep Theater’s version is so obviously created from a place of love and admiration for the story that I don’t think many people could take offense.

“I’m a shepherd, I’m a thief, I’m a murderer.”
“You’ll make a wonderful king.”
Tamburlaine (writer/actor Joey Hamburger), a hapless young sheep herder, is arrested in a security sweep done in advance of the impending wedding of the King (Grant Hooyer).  Tamburlaine may be innocent, but his compatriots in the prison cell have more checkered histories.  Surge (Jay Kistler) is a strongman with little need for an excuse to start a fight, and a conscience just flexible enough to allow him to be hired as a mercenary to do others’ dirty work for them.  Leon (Michael Rogers) abandoned life as a singer on the stage to try and inspire people to revolution against the corrupt ruling powers.  Ana (Iris Rose Page), well, she just really enjoys blowing things up.

“You’d never lie to me, because if you did I would explode you.”

This motley crew of misfits can barely keep up with the political machinations of the palace.  It seems everyone wants to hire them to give themselves an upper hand in trying to take control of the kingdom.  The king’s brother Henri (Nick Wolf) thinks he would make a better king.  King Gamma (Jacob Morley) from the country next door just needs someone, anyone, appropriate with whom he can form an alliance by marrying off his daughter Sophia (Tara Lucchino).  Needless to say, Sophia isn’t very happy about playing along with this wedding scenario.  Naturally there’s also an Oracle (Madeleine Rowe) involved - who may not be as useless or wrong as she at first seems, as well as servants like Allistaire (director/actor Michael Hugh Torsch) who are just trying to keep their heads down as the bullets, swords and bombs start flying.  There’s a lot to be said in this play for being among the last ones standing.  The ensemble is rounded out by Aidan Jhane Gallivan, Robb Goetzke, and Mike Merino.

Under Torsch’s director, the actors careen through Hamburger’s script from one scene to the next like they’re trapped in some kind of manic pinball machine - and I mean that as a compliment.  The high energy and wacky humor of the production is one of its chief charms.  Even though the whole thing clocks in at just about 90 minutes, it never seems rushed or confusing (which, given the convoluted plot, is really saying something).  There are running gags - like decoy royals who take the assassin’s bullets - that shouldn’t be nearly as funny as they are.  I found myself laughing at all sorts of inappropriate things because the production just made them so damn entertaining.  Don’t get me wrong, the humor’s dark, but it’s still humor.  When a character gets killed in an orgy of gunfire (no blood, just sound effects and great physical work by the actor), it’s making fun of all those operatic over the top character deaths we see in film, but at the same time it’s also the death of a character we know.  There are human consequences to all the violence here.  It’s not just mindless entertainment.

“Look at all the toothbrushes!”

And the writer in me appreciates the tightness of the script, and the fact that no beat is wasted along the way.  The prologue with the character we will come to know as the Oracle isn’t just a prologue, it’s a scene with a point that’s key to the plot.  We just don’t know that until later.  There’s a hooded figure who has come to consult the Oracle in the prologue.  We won’t learn who that hooded figure is until the end of the play.  By then, most audience members could be forgiven for forgetting that plot point.  But it’s all there, and nicely paid off.  Because it’s the explanation for how Tamburlaine gets sucked up into all the craziness in the first place.

A quick individual shout-out to the musicians - John Hilsen and Joni Griffith.  The original music that accompanies the action, most especially the way Griffith uses her voice to accent moments, is alternately hilarious and moving.  Tamburlaine wouldn’t be as effective a production without them.

“I killed King Harold accidentally.  I don’t know if I know how to kill someone… dentally.”

I’m not a Game of Thrones devotee, but I can see how that audience might enjoy this play a lot.  I can also speak personally to the fact that you don’t have to give a crap about palace intrigues as entertainment to still enjoy the heck out of Tamburlaine.  It’s fitting that they’re staging this at the Bedlam Theatre space in St. Paul.  Sheep Theater feels like they’re carrying on the Bedlam tradition, Bedlam 2.0, if you will - though Sheep Theater is very much its own thing.  If you like your theater scrappy and smart, Tamburlaine’s your ticket. (runs February 18th to 20th - closing this weekend)