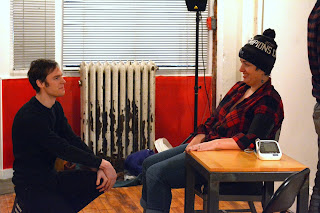 If somebody asked you how to stage a party, Small Art’s You Bring The Party would be a perfect little gem of an example.  Small Art - the wife/husband team of artists Laura Holway and Ben McGinley - gathered some like-minded performer friends - Taylor Baldry, Charles Campbell, Emily Gastineau, Erika Hansen, Rachel Jendrzejewski, Billy Mullaney and Blake Nellis - to create something at the Fresh Oysters Performance Research space that was part showcase, part actual party, and all fun.  My only regret was that I really needed to make myself leave at the end (the party continuing) because I needed to head home and start putting my thoughts together to write this blog post.  Most parties I feel a bit awkward.  This party, I could have comfortably stayed until they kicked me out.

“Talk to us about a small but persistent grief.”

I’m still a quiet, withdrawn sort of partygoer, don’t get me wrong.  But You Bring The Party was designed to engage me.  Not in the usual terrifying audience participation sort of way, where you feel like suddenly you’re on display or you have to perform.  Nope, we’re all in this together.  Everyone is so gentle and good-natured about it, you’re reminded that on some level, every party is a performance.  And the best parties are the kind where everyone around you is committed to the idea of everyone having a good time, in whatever form that might take. 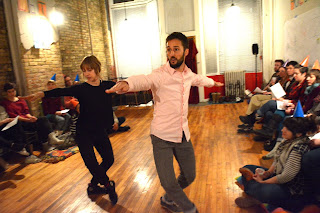 It wasn’t until after I’d left and started doing some research that I learned that the party was specifically for the lonely, the disappointed, and the brokenhearted.  That was the pitch in the publicity anyway.  Strangely, it wasn’t the least bit morose.  Oh, there was the “Wall of Loss” - a long stretch of white paper on which you could use markers to draw pictures or write about something that you’d lost.  They were very specific about that.  Not people you’d lost.  Things you’d lost.  The funny thing was I was gamely trying to play along but for a while I drew a blank.  People sprung to mind in a continual wave in my mind.  But things?  First, I acquired my grandmother’s pack rat gene, so things get buried or misplaced, never lost.  Since my move, all manner of things have been resurfacing as I sort through box after box.  So I had to dig back to junior high, but I finally did think of something.

That’s something you can do until the party gets started.  Of course, the trick is that the minute you walk in the door, the party has already started.  The entertainment portion of the evening may not kick in for 15 or 20 minutes, but the party atmosphere is on from the moment they invite you in.  There are cookies you can decorate to either eat yourself, offer to others, or just leave for someone to eat later (no cookie is left behind).  There’s a wine bar, and tiny bags of popcorn.

“This is the story of my pet rabbit, Ashes.”

The coat check isn’t really a coat check so much as coat day care.  There’s a brief form you fill out, as you would for a child being dropped off for the day.  You need to give your coat a name.  They also ask how old your coat is and if it has any allergies.  They want to know your coat’s favorite outdoor activity, favorite place in your home, favorite toy or stuffed animal, favorite type of music or band.  There’s a place for emergency contact, of course, and a question if there’s “anything you’d like to share about your coat to help it feel more comfortable while you’re gone.”  They then take a small paper heart with the same number in each half and rip it in two, giving you one of the numbered halves.  So it’s as if your heart is not whole until you are reunited with your coat again at the end of the evening.  At which point they give you back the form with the staff notes on your coat’s stay.  My coat was very excited to be around other coats his own age, according to the staff.  That bit of whimsy is a common denominator as part of the overall feel of the evening.  The more you play along, the more you get out of it.

“I love the future that we have together.”

Everyone gets a pointy colored party hat.  I tend to resist these things but thought, oh what the heck, why not?  The thing all the people who didn’t have party hats had in common?  They were all performers in the show.  The pre-performance mingling period I spoke to not one, not two, but three of the performers.  They seek out the people in the party hats and engage you in conversation.  It’s oddly comforting.  They’re all very good at setting you at ease.

“Tell us about the muscle that is your heart.”

Everyone also gets a copy of a two page script when they arrive.  Two audience members are recruited to be the main readers, and then the audience has their own collective response written in as well.  This group read at the start for the formal performance segment of the evening again has a great sense of humor and also sets the boundaries for what kind of party we’re all attending.  Then Charles Campbell, Erika Hansen and Blake Nellis do some dancing, first to music, then to some spoken word, some of which had an improvisational feel to it.

“I want a little sugar in my bowl.”

Fire Drill’s Emily Gastineau and Billy Mullaney presented a variation on their current research into the body’s response to art, Consequences Have Consequences (v 0.2.1).  (Having participated in a session of CHC v 0.1.1, I had some idea of what to expect, but watching from the outside someone else go through it was fascinating).  While an assistant monitors the audience volunteer’s blood pressure and pulse and maps them on a chart, he also marks the beginning of the next segment for Emily and Billy to change tactics.  For instance, is it more unsettling to the volunteer to be growled at, to watch someone upset, to watch a couple of people making out, to watch interpretive dance, or mime, or cheerleading moves; or to have someone go down on one knee, smile at them and say quite sincerely, “I love you”?

“Twin babies in a shopping cart.”

At one point the audience gets split in half and each half blindly helps a cast member fill in the blanks Mad Lib style with nouns, verbs and adjectives.  I will freely admit to drawing a complete blank when they needed an adjective from me (they moved on and came back when my brain unfroze).  The results resurface in alternating letters to “Dear Person I Hardly Remember” and “Dear Thing I’d Like To Forget” spoken into a microphone while Charles, Erika and Blake filled the space again with dance.  There’s also an homage to a lost family pet and some wailing thrown in for good measure.

“Today we laid on the bed.” 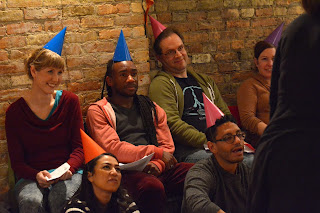 The thing I appreciate most about the evening is that it wasn’t cynical or depressing.  The artists all have hearts, bruised but still beating.  They’re too clear-eyed and smart to be sentimental, but they’re also too human not to still feel things deeply.  Humor is a mighty weapon against despair.  And sharing of a sort of communal happiness - which the best theater often does - is the strongest antidote to the kind of nervousness I feel when the fourth wall between me and the performers completely vanishes.

Neither Small Art nor The Twin Cities Producers Circle which is supporting You Bring The Party have been around all that long, but it’s great to see small groups gathering independent artists together under umbrella events like this, so we have a better shot at finding them.  There’s so much interesting work going on in this town, all at the same time, it’s too easy to miss good stuff. 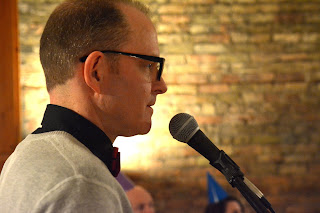