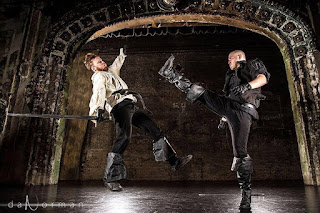 Fight Night is Theatre Coup d’Etat’s monthly excuse to gather people together in order to drink and engage in stage combat.  What could possibly go wrong?  (I’m kidding, of course.  It’s all perfectly, relatively, safe, especially the audience participation.) (Don’t worry.  It’s self-selecting audience participation.  And with the crowd this show attracts, there’s always plenty of willing volunteers.  If, like me, you just want to stay in your seat and watch, you totally can.)

Have you every watched a play and just wanted to skip straight to the fight sequences?  That’s what Fight Night does.

First, they tag the audience as they arrive, handing out either red or blue strips of fabric for audience members to tie around some part of their body (this gets very creative for some people).  Then the two female referees explain that everyone wearing blue in the audience is on one team, all the folks with red are on the other.  Throughout the evening, there are competitions in which both teams can accumulate points.  When one team gets a point, the other team drinks (everyone wins).  At the end of the night, the team with the fewest points “loses” and needs to down the number of drinks that is the difference between the winning and losing scores.

But first, the classics.  Kevin Fanshaw and Elohim Pena join one of the referees in a rapid fire, very irreverent, summary of the plot of Hamlet.  Then Fanshaw takes up Hamlet’s foil, and Pena that of Laertes, and they stage the climactic sword fight from that play.  Later in the evening we get the Romeo/Mercutio/Tybalt knife and sword fight from Romeo and Juliet.  In both there’s a really sense of humor, even in the swordplay itself.  Playfulness with weapons is just another method of taunting your opponent.

Another part of the evening is fantasy fight matchups.  Each team in the audience picks a side and whoever’s champion wins the fight gets a point for their team (once more, losers drink).  First fantasy fight - Macbeth vs. Darth Vader (smart money was on the Dark Lord of the Sith).  The other fantasy fight matchup featured the ladies - homicidal Harley Quinn of comic book fame vs. Disney princess Snow White. (I was not aware before that evening that Snow White is surprisingly good in a knife fight.)  They are soliciting suggestions for future fantasy fight matchups - my brain for some reason wants Emily Dickinson to fight Sylvia Plath, and W.H. Auden to fight e.e. cummings, complete with a poetry smackdown.  (Clearly, I need help.)

Audience members can also rack up fight points themselves.  No actual knives and broad swords here, though.  The sword fight is fought using styrofoam pool noodles.  For added protection, each swordsman gets a literal human shield: either Theatre Coup d’Etat’s artistic director James Napoleon Stone or company fight choreographer Adam Scarpello.  The volunteer swordsmen from the audience loop their arms through the arms of the human shield in front of them and wield the sword from there.  The human shields can also talk strategy with their fighters. (Fair warning: Scarpello is willing to take a bite out of a pool noodle if he has a chance.)  More hits, more points, more drinking.

There are also fisticuffs to be had.  Those audience volunteers get enormous inflatable red or blue boxing gloves, and are basically just aiming for a chest hit.  They get baseball catcher’s masks for a little extra protection (though when one fighter’s mask came off, the other fighter graciously removed his as well to keep it a fair fight).  More hits, more points, more drinking.

For the less combative though no less competitive, there’s Pictionary.  The words and phrases are ones here from either Shakespeare or Star Wars.  More points, more drinking - plus bad art and wild guessing.

Something additionally impressive here is that - other than Stone and Scarpello - everyone else on stage in the classic duels and fantasy matchups is relatively new to stage combat.  Scarpello specializes in training actors to bring the fights out from a place of character first.  So it’s an extension of character rather than something tacked on because the play says so - not just an actor turning attention away from the play and instead focusing on getting the moves right, like it was a dance or something.  The method works well here.  Everything’s safe, but the fights still seem real and even a little reckless and unexpected.

Fight Night is a heck of a lot of fun.  I was a little worried about the 10pm start time, but it’s such a brisk lively hour of fun with the audience games mixed among the fantasy fights and classic duels that you never have a chance to get sleepy.  And if you’re someone for who the night’s just getting started at 10pm, Fight Night’s a great way to kick things off (and start drinking).

They’re back again on the Bryant Lake Bowl stage on June 24 and July 29, so mark your calendars and enjoy a boisterous late night out.  (Meanwhile, for something completely different, they're doing The Glass Menagerie May 20th to June 6th, so check that out.  I'm fairly certain there are no weapons involved.)