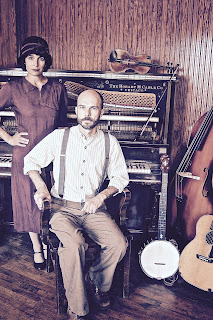 Sam’s Son, the new musical theater piece created by Bucket Brigade, has just about everything you could ask for.  Catchy musical numbers, great cast with killer voices, complex but fast moving and easy to follow story with just enough soap opera to keep things spicy, inventive staging, plus free pretzels, root beer and a trip to a speakeasy for the audience.  Sam’s Son may have found its original inspiration in the biblical story of Samson, but this early 20th century American story is a completely new invention.

“You can’t keep me from the fight, ‘cause the fight’s in me.”

The town of Good seems to have been spared the worst of the Great Depression in Prohibition-era America.  The widowed preacher Rev. Sam (Jeremiah Gamble) has raised his son Sam (Trevor Bunce) to be an upstanding young teenager, gifted with superior strength that he uses to help out around town.  Rev. Sam’s old friend Miriam (Vanessa Gamble) has returned to town, working as a field agent for Prohibition enforcement.  Back in the day, Rev. Sam and Miriam helped close the town saloon and drive alcohol out of town.  But just barely out of town - there’s still a shanty town down by the river with a speakeasy, so someone’s still making liquor.  Miriam’s not entirely convinced the problem is contained in the shanty town and enlists young Sam’s help on the case.  Down by the river, Sam meets fellow teenager Della (Kayla Peters), who helps broaden Sam’s small town horizons a bit.  Back in town, Miriam follows her instincts in regard to the local shopkeeper Alice (Bonni Allen), the washerwoman Gertrude (Gail Ottmar), and farmer Howard (Pete Colburn) with his young German farmhand Fritz (Seth Tychon).  Miriam warns part-time local law enforcer Charlie (Riley Parham) that he may want to clear out that one jail cell they have, which he’d been using for storage.  Miriam’s determined to crack the case and put someone behind bars.

“The 'E-N' Petersens live on the other side of town.”

As noted at the top of the review, the whole cast really delivers on the music, particularly the central couples played by the two Gambles, Bunce and Peters.  The score gives their voices a wide range of styles (and notes) to play with and they have a lot of stunning vocal moments throughout the evening. There’s an a cappella number for the quartet in act two that’s breathtaking. (Though it’s more ragtime than rock opera, I was getting a real Next To Normal vibe from a lot of the songs here - and I mean that as a compliment - though Sam’s Son owes just as much to the work Rogers and Hammerstein.  In many ways, it’s a very sturdy, old-school book musical.) Music director and arranger Michael Pearce Donley is also on the piano with the live band, accompanied by Chris Erickson on upright bass, and Brian Lenz on guitar, dobro, mandolin and drums.

“I don’t mind the criminals, Sam.  I do mind the hypocrites.”

Sam’s Son makes full use of the converted church that is the Art House North space.  All of act one and the second half of act two takes place upstairs in the sanctuary (pews for seats, with assigned seating no less).  Sean Byrd’s clever direction has the cast utilizing the center and side aisles just as much as the stage - the story surrounding the audience at times.  Intermission into the top of act two, the audience descends to the former church basement (where the box office was just an hour before) which has now been transformed into the speakeasy down in the shanty town by the river.  Free root beer and pretzels from local merchants for all in the crowd, plus some theatrical smoke/mist.  You’re warned ahead of time that someone’s actually going to be shouting “Fire!” in a crowded theater, but it’s all part of the show.  The smoke follows you back upstairs for the conclusion of the story.

Katie Phillips’ set design is inventive yet spare, often times just a lot of bare wooden planks - but there are also hidden compartments galore, all of which help transform the set for various locations quickly and simply.  There are a number of surprises in store which I won’t spoil here.  Courtney Schmitz’s lighting design helps track the story around the church building with evocative use of light, color and shadow.  Nadine Grant’s costume design sets the period against the bare stage and allows the cast to play multiple roles as needed to help flesh out the population of the town.  Nate Farley’s props help give the town some period detail and texture, and the logistics of this whole thing need careful managing so hats off to Farley’s duties as house manager (along with Casey Linstad), as well as stage manager Jay Carlson, his assistant Elizabeth Efteland, and technical director Trevor Muller-Hegel.

The whole thing is such a well-run, finely calibrated piece of plotting, balancing the storytelling almost perfectly between dialogue and musical numbers that it took me a while to figure out what was nagging at me.  Because, honestly, if you’re looking for a solid piece of new musical theater, Sam’s Son is definitely your ticket.

“Some things you’re better off not knowing.”

Really my only quibble with the piece is that the overwhelming hypocrisy of the town of Good sort of torpedoes any idea of the salvation of faith.  And this thing is literally being staged in a church, and one of the central characters is a minister.  Since almost everyone in town is harboring a secret that belies their Christian, church-going exterior, including the pastor, a more cynical audience member (or one with a less nuanced way of thinking) could easily conclude that all Christians are hypocrites.  And I don’t think that’s the intention of the play.  Sure young Sam is a true believer, but he’s a naive teenager, easily led astray because he hasn’t had a full picture of the world ever presented to him.  He’s just been told to stay away, not given any tools for how to deal with the vagaries of life in the larger world when he inevitably encounters them.

Also, when that “fire” breaks out in the speakeasy, it quickly burns out of control and threatens the town of Good.  Though the town is ultimately saved, there’s no further mention of the shanty town.  So, did everyone on the wrong side of the river burn, but that’s OK because the good people and the real town were spared?  I can’t think that’s the message the play wants to send either.  The supply chain for the illegal booze is established, but the end users are unclear.  Is it all confined to the shanty town, or are there secret drinkers in the town of Good as well?  Is the alcohol only doing harm?  Is it being at all enjoyed in moderation, or is there no such thing in this fictional town?  Prohibition was seen by many, in the end, as a foolhardy quest.  Where exactly does the play fall on this question?  Leaving it all up to an audience nearly a hundred years removed from that history, who may or may not have any context of their own to bring to the period, seems like a missed opportunity.

And there’s a curious lack of faith in the story and its characters.  The Christianity of the supporting characters in town seems to exist just to contrast their less than savory pursuits.  It’s not really a part of their lives they appear to be struggling with.  Even the pastor and his son seem oddly secular in the way they confront their troubles in the play.  There’s no life of prayer, no turning to the Bible outside sermonizing the congregation, no calling out for help in dealing with grief or alcoholism or other dark impulses.  The people of the play seem entirely disconnected from God.  They’re on their own.  It’s not that they have faith and lose it.  It’s not really there.  It’s a role they play.  There’s no depth beyond the surface.

“People need to hear the truth, son.  You just got to get it to them.”

All of which is a shame.  Because that additional element could add a richness to the characters’ struggles, and those of the town.  When all is said and done, the Great Depression is still gripping the country, and with the elimination of booze as a cash crop, what is the town going to do?  Even here, the notion of faith isn’t invoked, even in passing.  So either the storytellers are taking it for granted that the audience assumes this is part of the healing process for the town, or they’re trying so hard not to lean on the original source material of the story that they overcorrected in a faith-free direction.

That said, the music and singing in Sam's Son are so great that they almost completely make up for any small deficit of soul at the center of the story.  Like I said, the story itself is well-structured and fast-paced, with the songs frequently moving the action right along, so good that it took me a while to figure out what was bothering me.  The whole Bucket Brigade production is top notch.  Go and enjoy (and feel free to tell me I’m full of it.) (runs through October 28, 2017)