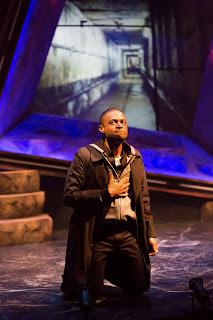 There are very few actors for whom I’d sit through another production of William Shakespeare's Hamlet.  Kory LaQuess Pullam is one of them.  So when I learned Park Square Theatre had cast Pullam as their Hamlet, I was on board.  And that was before I learned that Joel Sass was in the director’s chair.  That also helped put my mind at ease that this was going to be a different, and enjoyable Hamlet to watch.  If you’ve never seen Hamlet (like the friend who attended the show with me), this is a great first exposure to the story.  If, like me, you’ve seen more than your fair share of Hamlets over the years, Park Square’s Hamlet, for many reasons, is a fresh new take on an old tale and well worth your evening.

“What should such fellows as I do crawling between earth and heaven?”

Prince Hamlet (Kory LaQuess Pullam) gets a visit from the ghost of his dead father (Theo Langason). Turns out the dead king was done in by his own brother Claudius (Charles Hubbell), who then stole the throne and married the newly widowed queen Gertrude (Sandra Struthers), Hamlet’s mom.  Awkward. Aided in his quest for revenge by his best friend Horatio (Kathryn Fumie), Hamlet’s plan ends up accumulating quite a bit of collateral damage.  Hamlet’s potential love interest Ophelia (Maeve Coleen Moynihan), her brother Laertes (Wesley Mouri), and their mother Polonia (Tinne Rosenmeier) - an advisor to the new king and queen - all end up in the crossfire.  Playing multiple other characters around the edges of the story are Charles Numrich and Imani Vaughn-Jones.  My friend summed things up nicely - kids don’t like it when their parents die.

“Let them be well used, for they are the abstract and brief chronicles of the time.”

The really good productions of Hamlet I’ve seen had one thing in common - they trusted the script to do most of the heavy lifting for them.  Hamlet isn’t considered one of the greatest plays in the English language for nothing.  The misbegotten productions of Hamlet I’ve seen all had variations on the same problem - they were trying to “fix” Hamlet.  Sometimes they wanted to play with the structure of the story, sometimes they were really focused on scene changes, sometimes they wanted to inject current social media technology in the story.  And like a body rejecting a bad organ transplant, Hamlet had its revenge on the production, which unfortunately also meant the audience.

“My words fly up, my thoughts remain below.”

So when I saw that in addition to directing the play, Joel Sass was being credited with adapting the play, my first thought was, “It’s not that I don’t trust Joel Sass, but trying to rewrite Hamlet rarely ends well.”  I’m delightedly relieved to say this Hamlet is an exception to that rule.  This isn’t just a cutting of the script - nearly everyone does some trimming of the text, otherwise the play would need multiple intermissions and twice the running time.  Sass did some major cosmetic surgery on the story and the cast list.  Fans of Rosencrantz and Guildenstern, or Fortinbras are in for a disappointment, their subplots are all lopped right out of the story - but if you’re coming to Hamlet to see those characters, you might not be attending for the right reasons.  Purists may howl at shifting the "To Be Or Not To Be" soliloquy into a different scene but, again, same note.  There’s also female actors in traditionally male roles, which is fine by me - after all, men played all the roles in these plays for years, time to shake things up.

“For who would bear the whips and scorns of time…?”

Part of me wants to draw attention to the fact that it’s a multiracial cast, but another part of me wishes that wasn’t such a big deal.  After all, it’s not because the cast is led by actors of color that the production is so good.  That just makes it look different than all the lily-white theater I’ve seen in the past.  The production is good because the actors are good.  Period.  If, in addition, the play better reflects the times because of the diversity of the cast, that’s a welcome bonus.  Is it exciting to see Kory LaQuess Pullam as Hamlet for a whole host of reasons? Absolutely.  Is it way past time for things like this to be a more common occurrence?  Absolutely.

“We know what we are, but know not what we may be.”

Sass’ rejiggering of the text is reinforced by his work on the set design.  The set has a chandelier off to the side as a little nod to palatial grandeur. But the focal point of the set is an enormous off-kilter cube, with a smattering of stones inside it, and a view through the back to a video screen behind it.  The cube serves as both location, passage way, and movie screen.  The impressive video design of Kathy Maxwell gets a real workout in the cube, as does the vivid and colorful lighting design of Michael P. Kittel.  By clearing out some of the subplots and not being enamored of big sweeping set changes, the production ends up more focused on the central characters, the acting and the script.  And that’s why it works as well as it does, which is very well indeed.

“Repent what’s past. Avoid what is to come.”

While the music of C. Andrew Mayer’s sound design was useful as connective tissue between the scenes, there were times inside the scenes where I could have done with a little less of it.  Rather than the music trying to tell me how to feel, I was more interested in how the actors and the words might make me feel.  And while we’re on the subject of feeling, there are sections of the play that feel a bit breathless in their pacing.  I’m all for encouraging a production of Hamlet not to indulge and caress every syllable of every word and bog things down, but there were times I felt like I could have done with a slightly slower pace just so I could get a read on how characters were feeling about the events taking place around them.  It wasn’t a chronic problem, but it happened enough that I thought I should mention they could take an extra breath or two now and then, let things settle before we moved on to the next plot point.

“I shall the effect of this good lesson keep, as watchman to my heart.”

The adaptation and direction also spread the spotlight around a bit, which allows characters like Ophelia and Claudius to become more fully fleshed-out human beings.  Of course it helps that those characters are played by actors as skilled as Maeve Coleen Moynihan and Charles Hubbell.  Each gets almost soliloquy-like moments of their own which they make the most of, and it helps ground the play in the few moments that Hamlet’s not onstage.  And it’s a great touch that the gravediggers late in the action are played by actors whose earlier characters are now dead.  There’s a lot of fun stuff like that in the way Sass has streamlined the play.

“It is not nor it cannot come to good.”

Another nice wrinkle in the casting is that Hamlet’s best friend Horatio is played by Kathryn Fumie, who herself played Hamlet in Theatre Unbound’s all-female production of the play.  She was the best thing in it (as all Hamlets, in productions good and bad, tend to be).  But if there’s anyone who understands the mountain of a role that Pullam is climbing here, it’s Fumie.  As the cast moved offstage after the bows, she was particularly effusive and supportive of her onstage buddy, which was really sweet to see.  I imagine you couldn’t ask for a nicer sidekick.

“Absent thee from felicity awhile, and in this harsh world draw thy breath in pain to tell my story.”

If you’re looking for an accessible and entertaining Hamlet, Park Square has you covered. Kory LaQuess Pullam in the title role, and the ensemble as a group, are great. (runs through November 11, 2017)