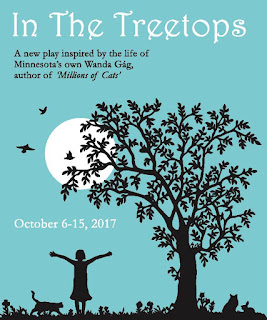 As we left the theater I said to my friend, half-jokingly, “Leave it to Sandbox Theatre to create a children’s show about poverty and death.”  Half-jokingly.  And art.  It’s also about art, and the artist, and creating, because that’s also frequently tucked in the back of things the Sandbox ensemble creates and performs.

“We had to fashion this world out of games.”

Here the artist in question is celebrated Minnesota illustrator and author Wanda Gag, best known for her children’s book Millions of Cats - a story still out there in bookstores and libraries, going on 90 years now.  Sandbox Theatre’s new company-created work, In The Treetops, focuses on the seeds of Gag’s later career that were planted in the games and storytelling of her own peculiar childhood in New Ulm.  Project lead Megan Campbell Lagas, director Matthew Glover, and assistant directors/ensemble creators Peter Heeringa and Heather Stone have zeroed in on a subject rich in possibilities.

“We draw to dream a place between what is and what can be.”

Gag led such a varied and colorful life that no one play could encompass it all, so it’s a wise strategy to focus in on one particular period of her life.  In The Treetops tackles the time when the seven Gag children were forced to fend for themselves.  The father of the family died when Wanda was just 15 years old, their mother died just nine years later.  A refrain in the production is a variation on the father’s last words, “What papa couldn’t finish, Wanda must.”  As the eldest child, Wanda essentially parented her six younger siblings, but she flouted convention (something of a theme throughout her life) by refusing to give up her training at art school during that same time.  The family may have suffered during her absences, but it still held together.

“Survived by the leaves in the trees, and the feather tucked into my hair.”

Sandbox takes the games the children play together to reveal plot and character in ingenious ways.  Behind them, a screen alternates between projections of Wanda’s illustrations, and shadow play.  Mask work is also engaged, to create other human characters (such as the Gag family’s disapproving neighbors, as well as more friendly storytelling friends).  There are also inhuman characters, like Sweet Tooth - a cross between a prehistoric fish and the Creature from the Black Lagoon, who makes amusingly odd entrances and exits.

“The penny or the pencil?”

Wanda (Kristina Fjellman) looks back from the comfort of her adult artist studio on childhood with her siblings Flavia (Evelyn Digirolamo), Tussy (Ashawnti Sakina Ford), and Howard (Kalen Rainbow Keir), as well as her best friend Alma (Megan Burns).  The actors take on many roles in the story, and there are many songs and dances (accompanied by musician/music designer Theo Langason).  There isn’t really a set to speak of, so most of the work shifting time and place goes to Mitchell Frazier’s vivid lighting design, backed up by Rebecca Bernstein’s costume deisgn.

“Buried with music, she will shake the earth in which she sleeps.”

There are some great sequences here, like the comical mimicry of the children doing their own version of the daily news.  There is also the moving evocation of the parents in shadow, often larger than life, sometimes just reaching out a hand in shadow to support Wanda when she feels need of it.  All the music feels fresh and playful.  There’s a lot to like In The Treetops.

“She knew just where her heart was.”

There’s also a bit of a disconnect between the various parts and some kind of larger story.  There are times when it feels like the forward motion of the event kind of stalls, jumps the track for a while, then hops back on to move forward again.  And for all the calling out of Wanda Gag by name, if you didn’t know who she was before you got to the theater, this show wouldn’t really tell you much.  The program does say “inspired by the life of” so it’s not pretending to be any kind of detailed biography, nor does it need to be.  But just as a character, it’s not entirely clear who the adult Wanda is, what her work, reputation or status are, or why exactly she’s reflecting back now, in this particular moment with the audience to whom she’s speaking.  There’s no distinct connection between what takes place onstage in the past, and the play’s brief nod to the present in the adult Wanda’s life.  I’m all for Sandbox’s brand of storytelling taking us where it wants to go, but right now the directions are still a little fuzzy.  I’m not arguing for your standard issue biographical approach by any means.  But a little more context as to why this person, in this time period (which is - ?), telling this story, now, would be useful to give the piece some kind of foundation.  Otherwise it’s just a free-floating series of children’s games through an adult lens.

“Won’t you spill fresh paint?  Don’t you wash it from my grave.”

Wanda and her siblings are fun to spend time with, but ultimately I wonder why spend that time with them.  Which is kind of a shame because what Sandbox is doing with In The Treetops is really remarkable.  They’re addressing things like the loss of parents, death being a part of life (there are fanciful human and animal funerals for characters real and imaginary throughout), and even hints of the hardships endured when one is poor.  This is all in the framework of something not at all dour or downbeat, but optimistic and full of energy, music, light and color.  It makes scary things less scary.  In The Treetops could be an important piece of theater for children and their parents to share.  A  lot of the elements are already in place.  It’s just not quite there yet.

“On the edge of our town, there is a house with seven colors.”

Still, the version of Sandbox Theatre's In The Treetops we’ve got now is well worth checking out, particularly if you’re an adult looking for some theater that’s accessible and ready to share with the kids in your life.  You’ll both find something to enjoy here. (running through October 15, 2017 at Open Eye Figure Theatre)