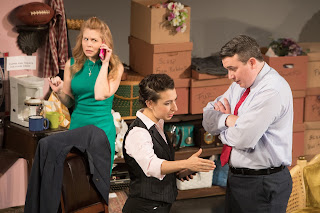 It’s not often that a play can genuinely surprise me any more.  Minnesota Jewish Theatre Company’s production of Jason Odell Williams’ comedy/drama Church & State surprised me.  Looking back, I guess I should have seen some of those surprises coming, but Church & State snuck up on me.  (So I will endeavor to avoid spoiling the surprise for others.)  I guess the biggest surprise, which is not a spoiler, is that Church & State takes discussions of gun culture and religious faith and makes them really entertaining to watch.  Of course, it might not have worked as well if the cast weren’t as good, but director Michael Kissin has assembled a great group of actors, so Church & State gets the best it could ask for.

North Carolina Senator Charlie Whitmore (Matthew Rein) is in the closing days of his reelection bid when a mass shooting at an elementary school rattles his faith in God, guns, and government alike.  His wife Sara (Kim Kivens) is enough of a true believer for them both, however, and refuses to give in to the kind of doubt that has him questioning everything in their lives except his love for her.  Charlie’s campaign manager Alex Klein (Miriam Schwartz) is just trying to keep this close election battle from going completely off the rails.  So when Charlie tosses his well-worn stump speech aside for some extemporaneous remarks, it could spell the end of his career, or the start of a whole new unexpected chapter.  Actor Josh Zwick rounds out the ensemble playing multiple roles from reporter to security guard to eager young campaign worker.

“You can’t stop every single lunatic without taking away our rights!”

Jason Odell Williams’ script and MJTC’s production take some well-worn character tropes - the southern Senator, the churchgoing trophy wife, the east coast Jewish political operative - and try to dig beneath the surface.  They don’t get especially deep, but thanks to the actors involved, these are still fully rounded individual human beings on stage.  You believe in both their faith, and their crisis of faith.  The jokes mostly come from character, so the laughs are earned honestly, as are the darker moments.  The play exists largely to have an intelligent conversation about the role of guns and religion in American life and it’s a smart vehicle with which to do that.

“I always thought God was kind of like bottled water.”

At first I started to feel a bit cheated that we didn’t get to hear the full speech from Senator Whitmore which changed his political fortunes and the direction of the story, but it turns out the writer was just saving it up for a later moment when it packs more of a punch.  The speech is the the reason the play was written.  MJTC chose the play long before the recent events in Las Vegas, but the speech has a place to call out the names of pivotal shootings in our history.  Hearing those more recent names makes the play sadly relevant to the current moment in a way I’m sure the writer wishes didn’t keep happening.

“He may wear the pants in the family, but I’m the one who tells him which pants.”

It’s hard to address issues like guns and religion without descending into cliche, but Church & State does a nice job of avoiding a lot of those problems.  It filters the issues through the people in front of us, and that grounds the discussion in a way that general talking points wouldn’t.

“I thought you were Jewish.”
“The Old Testament *is* Jewish.”

The script sometimes strains at being confined to a backstage room at a college auditorium, and also in its limited number of characters.  The weird thing is, in its closing sequence, the play breaks out of its single location, as well as breaking out of strict linear time.  The use of one young actor to pop up in multiple guises also hints that the play might have used a broader canvas of people and location.  It seems as though it was flirting with busting out, while not requiring any additional literal set pieces or increased cast size, but decided not to risk it.  Given the desire to get this story out there, I can understand the rationale with trying to keep the story contained and thus, more attractive and marketable to small theaters.  But it feels a little like a failure of imagination or nerve.  Looking at how much was accomplished with so little, I still can’t help wishing they’d pushed for more.

All that said, even a play that seemed so basic on the surface managed to sucker punch me a couple of times before it was all over so - well played, Church & State, well played.  It’s a conversation about a couple of thorny subjects that manages to never give in to cynicism or despair, so that’s quite a trick. Minnesota Jewish Theatre's Church & State is a solid piece of theater.  You should see it. (running through November 12, 2017)