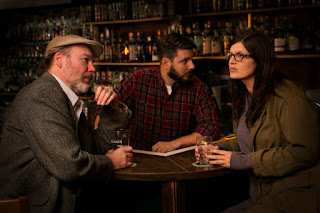 The last two stories told in Conor McPherson’s The Weir will knock you on your ass.  In that closing stretch, the current production from Wayward Theatre is amazing.  The script, the performances, the direction, the design.  Mesmerizing stuff.  Absolutely worth going out to see.  But it took me a while to get there.

“There’s not one morning I don’t wake up with her name in the room.”

I follow a bit of British television, I watch a fair number of foreign films.  I like to think I can keep up with speedy vocal delivery coupled with unfamiliar accents in a piece of entertainment.  But the Irish accents in The Weir are so thick that I have to admit I was lost for the first chunk of the play.  I strained to understand, I really did.  But I hadn’t a clue what they were saying half the time.

“If she’s out there, she still needs me.”

Now, on the one hand, that’s a credit to the actors, none of whom are actually imported from Ireland.  Those accents, courtesy of help from dialect coach Foster Johns, I’m assuming are impressively realistic.  The actors wrap the sound of that accent around McPherson’s words and it’s like they’re actually talking, not just saying lines.  They are completely comfortable in the sound and idiom of this storytelling play.  But I was baffled as an audience member.  I could make out the relationships between people fairly well from the way they behaved with each other.  But at first I was also frequently lost as to what they were saying and why.

“I regret the stories now.  Let’s not have any more of them.”

This could be just a “Shakespeare brain adjustment” kind of thing.  Most folks, sitting down to a Shakespeare play, even ones who’ve seen a few, it takes their brain a little while to adjust to that Elizabethan poetic English way of speaking.  Then about five or ten minutes in, the switch flips, the brain catches on, and you’re fine the rest of the way.  I experienced something similar in The Weir.  It just took a lot longer for some reason.  I honestly don’t think it’s the actors’ fault.  I’m just feeling a bit slow and bewildered in the aftermath of it all.  Because the bulk of the play that I did understand clearly, really knocked my socks off.

“And she wouldn’t come out of the living room.  Because she said there was a woman on the stairs.”

I’ve got Conor McPherson plays on the bookshelf at home, so I can double back and take my time picking over the words on the page, really appreciate those first couple of stories and the banter between the regulars at this Irish bar in detail.  But I don’t want the review to wait that long.  So…

“And he stood beside me, under the tree, looking at the grave.”

In an out of the way pub in an out of the way small town in Sligo County, Ireland in 1997, five people gather around the bar and regale each other with progressively spookier and more haunting tales.  The stories range from the supernatural to the all too human.  Brendan (Tim McVean) runs the bar.  Jack (Arthur Moss), a regular at the pub, runs an auto repair shop, assisted by Jim (Lucas Gerstner).  Self-proclaimed dealmaker-about-town Finbar (Edwin Strout) brings a young woman, Valerie (Sarah Nargang) to the bar to introduce her to some of the local color.  Valerie’s new to town, for reasons she’ll share later that I won’t spoil (it’s one of those great final stories - alongside the one from Jack, with Jim’s tale taking a spooky third place nod - Nargang, Moss and Gerstner are all great in their big moments).  The men tell tales to entertain Valerie, and one-up each other, not realizing how easily a competition like that might get out of control, leading to things they never imagined being said.  The Weir is a great piece of storytelling, and everyone in the cast under the guidance of director Michael Kelley takes full advantage of the opportunity to hold us in rapt attention, with humor, chills, and genuine pathos.

“She was a chambermaid, you see.  She knew the couples who were being all illicit because she’d go in to do the room in the morning and the bed would be already made.”

The setting is delightfully meta - Wayward Theatre company has charged set designer Justin Hooper the task of building a bar inside a bar.  The production is being staged at the Urban Growler brewery in their newly renovated Barrel Room at the back of the establishment.  You pass through the real bar to enter a theater, and watch actors in an imaginary bar.  Hooper really put their credited carpenter Conor O’Brien through his paces because this pub is all dark wood and realistic doors, counters and shelves.  Terri Ristow has populated the space with what feel like all the right props (and a working tap).  We even get a peanut warning at the door.

“Having all your worst fears confirmed for you.  Ghosts and angels and all this?”

There’s not a lot of variety possible given the simple lighting options in the space but designer Ian Knodel still makes the most of it, focusing the light down when a character is deep within their story, only releasing us to regular lighting again when the storytelling releases us.  The actors all reinforce this focus, giving their fellow cast members each their full attention when it’s their turn to step to the center of the story.  They’re a unit that works well together.

The Weir is a perfect play for Halloween season (which may explain why Matchbox Theatre is also doing a production in a different part of the Twin Cities right now).  There are no monsters or serial killers, but all the shocks and hauntings that a normal life has to offer on are full display.  Sometimes the worst things that can happen to us are things so common that none of us can really escape them.  Sometimes they are things that are done to us.  Sometimes they are things we do to ourselves.  Wayward Theatre's production of The Weir is the best kind of spooky, and it sticks with you.  You should check it out. (running through November 4, 2017 - Matchbox's other production of The Weir closes October 28, 2017)

(l to r: Arthur Moss as Jack, Tim McVean as Brendan, and Sarah Nargang as Valerie in The Weir;  photo by Lauren B. Photography)