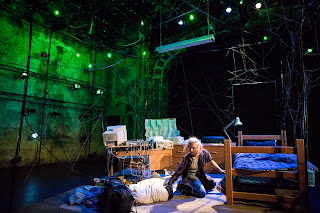 It’s 1994, and there’s a monster on the internet.  That’s the premise of Swandive Theatre’s world premiere production of Sam Graber’s new play mONSTER.  Tech nerd Brill (Kelsey McMahon) has camped out in a dorm room on the far end of campus, where the internet signal is the strongest, to work in league with an unseen cadre of fellow computer enthusiasts to try and scrub the internet and keep it safe from this monster.  The uninitiated, should they see the monster online, will get drawn into some zombie-like trance.  So, metaphor.  (As much for Instagram as it is for porn - pick your internet poison, the monster will appear.)

“Did we invent the internet, or was it always there, waiting?”

The story is set in a time when the internet was just beginning to reach the wider public.  Back when a lot of people thought AOL actually was the whole internet, rather than just a portal to it.  Back when not everyone and their sister (or even colleges) had their own website (or even email).  Back when ordering something online to be delivered to your home seemed exotic.  Way back before smartphones were something everyone had in their pocket.

“It was a little like looking over God’s shoulder.”

Brill’s efforts are confounded by the arrival of fellow student Nessa (Jamie Fields), who was actually assigned to live in the dorm room that Brill has commandeered with all her equipment.  Nessa tries to roll with the idea of an unexpected roommate.  She also tries to have a normal college experience of classes mixed with partying and slacking off.  The odd man out in the situation is the residential assistant for the dorm, Greg (Avi Aharoni).  He tries to broker peace, maybe get Nessa to a normal room, maybe even flirt with her a little in his enormously awkward way.  But everyone ends up colliding in unhelpful ways, despite their best efforts to keep the whole situation under control.

“If you see it in full, it brings out your true insides.”

mONSTER isn’t a bad idea for a play.  Graber’s a skillful playwright who knows his way around dialogue.  All the actors, under the direction of Meg DiSciorio and her assistant director Bryan Grosso, get multi-layered characters to dig into, and they do.  Kevin Springer delivers another kickass sound design.  Sean McArdle’s funky set, with a spider’s web of cables enveloping and defining the boundaries of the dorm room, is a great look for a creepy scenario like this.  Though the dorm room itself is claustrophobic, the staging, with a lot of help from Jesse Cogswell’s lighting design, takes full advantage of the width, height and depth of the Southern Theater space.  All the elements are there.

The problem is the story doesn’t really hang together.  There are a lot of great details of the era that Graber nails in the script to great comic effect.  Beyond the jokes, though, he also really took me back to that pre- cell phone, pre-computer focused, way of campus living.  You know, when people actually still went to libraries because they had to, because that’s where the information was.  When people spent time together because if you wanted to spend time with someone, you had to physically be in their presence.  You didn’t have a device to connect to them across campus or across the country.  Phones were physically rooted in a location, you went to them, they didn’t travel with you.  It really was a different time.  mONSTER evokes that really well, both on the page and in production.

“Measuring the impact of engineering on morality.”

And even if I granted you the notion that there’s a monster on the internet, 1994 isn’t the beginning of the internet.  1994 is the point at which the internet starts to really get its tentacles into larger society.  But the internet had been in development for thirty years prior to that.  I’m supposed to believe the monster just bided its time while the think tanks and the military developed the idea of the internet?  That it decided that the best way to take over society was NOT to take over the brain trust guiding human advancement, NOT to take over the military which could subjugate or destroy the world?  No, the monster decided to wait until unsuspecting college students started poking around.  THEN it would make its move.  I’m not saying I couldn’t buy this scenario if it was presented the right way.  I’m just saying right now I don’t buy it.

“When you get tired of standing in for God, come and find me.”

Swandive Theatre’s production of mONSTER is a great presentation of a new work.  There’s a lot of talent on display here.  The sense of dread and unease is often quite palpable.  But the idea undergirding the play feels a little half-baked and under-researched.  And it often strains against the bounds of the fact that there’s only three characters the story has to play with while it’s trying to invoke an entire college experience as its backdrop.  Another year in development, maybe a slightly larger ensemble to populate the world and expand the story?  They might be on to something.

Meantime, thanks to this review, I feel like the monster on the internet at the moment is probably me. (through October 7, 2017 at the Southern Theater)

(photo courtesy of Swandive Theatre - Kelsey McMahon as Brill, trying to keep her computer base of operations in order in mONSTER)