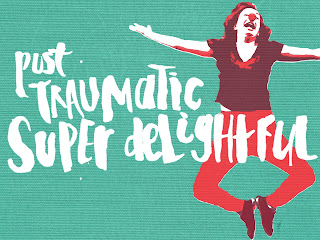 There are a lot of amazing things about Antonia Lassar’s Post Traumatic Super Delightful (PTSD), but the most amazing thing is Lassar herself.  Because if you call it a clown show, that’s not an expansive enough label to encompass what’s going on here.  If you call it a one-woman show, that also doesn’t do it justice.  Mostly because Lassar isn’t just a clown or even just one woman.  She so vividly creates so many characters that it feels like she’s several people at the same time.  And then you meet her on the street saying “Feminist clown show?  Feminist clown show?” as she puts a postcard for PSTD in your hand, and you still fail to recognize her because she seems like yet another person offstage.

“I wish a ceiling fan could cry.”

Lassar uses the clown persona in interludes throughout Post Traumatic Super Delightful to give the audience a chance to breathe, and laugh in a different way.  Perhaps there’s some satire included as well, or maybe just an enormous fart to undercut tension or sentimentality.

But the heart of PTSD is Lassar’s recreation of three key people impacted by a case of sexual assault on a college campus.  The framework in which we meet this people is ostensibly the artist creating a thesis show about sexual assault.  We’re led to believe it’s ultimately the show we’re seeing right now in front of us, but the interviews take place over a period of time.  During that time, the clown show goes through more than one draft, and even a set of initial performances.  We hear the interviewees responding to it.  Some elements of that show are things we see around these interviews.  But the show within a show has become so politically troublesome that the campus no longer supports it and it needs to find a home at the local YWCA.

The survivor of the sexual assault is much discussed, but never met.  Instead we meet the Title IX administrator, hired by the campus in the wake of the sexual assault, to try and improve the atmosphere and safety for women at the college.  The administrator is an outspoken Russian woman who prides herself on her looks, and her determination not to back down in the face of resistance from those who govern the school.

There is also a professor who had both the survivor and the alleged perpetrator of the assault in one of her classes.  The professor serves as the faculty advisor to the accused rapist, and at first is very vocal in her support of him.  She is just as vocal in her doubts about the victim.

Finally, we also get to meet the young man accused of the crime of sexual assault.  He doesn’t understand how he finds himself in the middle of this maelstrom.  He is convinced of his innocence.  His suspension and pending hearing trouble him, but not nearly as much as the idea of his younger sister (who reveres him) finding out about it.

“You know the details.  Do you think I raped her?”

Lassar in creating these three people is such an adept chameleon that it’s mindboggling.  After establishing the three “characters” - their personalities, accents, vocal inflections, the way they carry themselves physically - Lassar begins to switch between them at will, sometimes in the middle of sentence, without missing a beat.  It’s like you’re watching three interviews in a documentary being interspliced together - only it’s a single performer bouncing back and forth between characters so effortlessly that you can forget she’s doing it.

“With all the sh*t on this campus, we have to use it to fertilize something good.”

There’s a lot of humor even in these interview segments of PTSD.  Some of it’s dark humor, but with a subject like this, that would seem to be completely impervious to comedy, you gratefully take your laughs where you can get them.

There’s also a lot of food for thought in Post Traumatic Super Delightful.  But what a great gift the show is.  One person, easy to travel, and given the epidemic of sexual assault on college campuses these days, there’s a far too vast array of potential audiences out there in need of it.  If anybody’s got the energy to make those journeys, it’s Lassar.  I’m just glad she brought it to Minnesota for our Fringe.