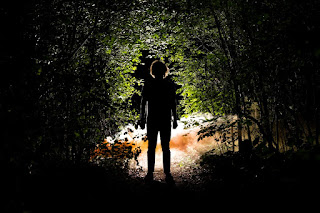 What would you tell your younger self? In this coming-of-age ghost story, Sam comes face-to-face with the past. But as Sam tries desperately to change it, something sinister is close behind...

I could probably have just lumped this one in alongside Sheep Theater’s latest Fringe show Kaboom, since Michael Rogers is one of Sheep’s regular collaborators, and was part of the writing team for this June’s Sheep Theater production of The Minotaur or: Amelia Earhart is Alive and Traveling Through the Underworld.

But this is Rogers striking out on his own outside the Sheep Theater umbrella, so I thought it deserved special mention.

Plus the promise of “lightsaber fights, gymnasium dances, and frightening visits from a mysterious shadow monster” so, what’s not to like?

The press release described it as part Stranger Things, part It’s A Wonderful Life.  It’s been further described as a “highly physical ensemble focused production is inspired by childhood trauma and nostalgia and a tribute of sorts to mental health when grappling with anxiety, depression, or other psychological illnesses and the process one has to go through to find healing and acceptance of where they are. It'll feature lightsabers, disco dancing, mario kart, spooks, thrills, and a heartfelt message.”