Review - Words Do Move - Sandbox Theatre - The Importance of Being Earnest – 4.5 stars 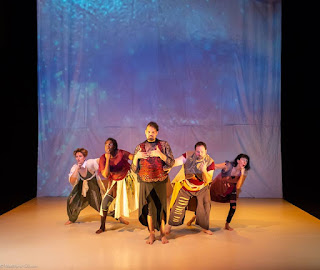 It says  something about the times we’re living in right now that the performance of a group of people telling their personal stories and trying to put some positive energy into the world seems, weirdly, out of place.  Not like, “This shouldn’t be happening” so much as “Wait, we still do that?”  A woman being heard?  A trans person being heard?  People of color, or queer people, being heard?  People being emotionally vulnerable, and heard?  How quaint.  How odd.  How unlike American society in 2018.  That’s Sandbox Theatre’s new company created work Words Do Move.

Because nobody’s shouting.  The one person who interrupts does so as a demonstration of why interrupting is a bad thing to do.  Mostly the ensemble of Words Do Move (Hector Chavarria, Delta Rae Giordano, Peter Heeringa, Henry Ellen Sansone, and Atim Opoka, with live music by Theo Langason) get to state their case, and are then embraced for it, often literally.  But Words Do Move is not unrealistically sunny in its disposition.  It’s fighting against some pretty strong headwinds to reach a place of self-acceptance and group acceptance.  And that struggle makes the place the performance ends up feel both honest and genuinely cathartic.

“Growing up I was surrounded by pale faces and blue eyes.”

But it’s strange, because people have been doing this kind of theater since the 1960s and 70s.  Earnest and well-intentioned, some people might dismiss such theater as naïve, or unrealistically walled off from the full complexities of modern life.  But honestly, I think it’s refreshing.  If you’re a little exhausted by all the shouting and the arguing, time spent with Words Do Move is a welcome relief.  Words Do Move doesn’t have an overarching  plot to speak of.  Directed by Matthew Glover and Heather Stone (also the project lead), and stage managed by Jaya Robillard, Words Do Move is a collection of individual testimonies, some direct, some more abstract in presentation.  The common thread through all of it is nearly constant movement.  Words Do Move isn’t a dance show, and it’s not a bunch of talking heads.  It’s sort of a hybrid of the two.

“Proceed with your eyes and your heart open.”

The content of Words Do Move appears to come directly from the personal experience of the performers involved.  Because it is so specific and personal, it not only draws the audience in, it creates a feeling of universal humanity.  We recognize the performers as fellow human beings, even though they may look and act differently than we do.  In that recognition of shared humanity, their feelings and struggles (and triumphs) are shared with the people watching.  This probably makes the whole thing sound very vague and esoteric.   But though there are elements like mask work and word play, both are repeatedly invoked to help the performers’ stories worm further into your brain, and hopefully your heart.  It’s not clever or symbolic for its own sake,  it’s clever and symbolic in service of a greater understanding.

“You’ve lost more skin than you’ve put in,
So maybe it’s my turn.”

An example of the word play, a performer says “I grew up not seeing people like me” as a way to launch into a sequence, and concludes it later by saying simply “I grew up.”  Clever, yes.  But it also means  something  larger.  In the same way, a phrase like “If I’m a number, what is the number that makes me equal?” is both a question and an answer at the same time.  The use of language in Words Do Move is always pointed toward a specific purpose, beyond the ingenious use and construction of the language itself.  In the same way, the movement is impressive and eye-catching, but not just movement for the sake of being pretty.  There’s significance in human touch, or the lack of contact, the reaching out of a hand that is not taken.

All that said, I haven’t even touched on two elements that loom very large, both literally and figuratively – the video and the music of Words Do Move.  Theo Langason’s music, instrumental and vocal, has become such an expected part of most Sandbox Theatre productions for me now that I can’t imagine a Sandbox experience without it, and I kind of don’t want to.  Just as the movement makes the words of Words Do Move richer, the presence of Langason’s music, except in those key instances when silence on stage is necessary, makes the whole production of Words Do Move richer.  Langason’s own way with words in the lyrics of the songs which are part of the evening always dazzles me.  The simplicity of the structures are deceptive.  He always arranges his words and notes for maximum impact.

“Veins and bones and blood and muscle.”

The video by Tamara Ober, with additional stop-motion video by Kristina Fjellman, is projected on a massive backdrop that towers over the performers, and also projected onto the floor on which they walk.  Like the music, the video is a significant presence in the room.  It changes the quality of the air and light.  It helps reinforce the mood.  People walking, a camera travels down country or prairie roads or into the heart of a city, a sunrise through the trees of a forest, a blue bicycle, weathered wooden doors, a shot that rises slowly up the side of a building  and into the sky, human shadows, candle flames, a field of stars, a hand reaching out and touching an arm.  Everything is just specific enough not to fall into the trap of cliché.  But like a lot of Sandbox productions, Words Do Move – visually, verbally, musically – is always showing the nerve to walk right up to that line without tipping over.  (Oh, you’re worried about us being too sentimental or overly emotional?  Brace yourselves.  OK, what did that say about you that you were worried?  Why is there a limit, why shouldn’t we push it?)

“My walk belongs to me.”

The night I saw it, Words Do Move had the misfortune of being both on the night of the first significant snowfall in Minneapolis, but also the night of the protests against the Trump administration’s moves to shut down the Mueller investigation into Russian influence in the 2016 presidential election.  (Members of the resistance would heartily embrace this show, as would the larger queer community, so it’s a shame they couldn’t be in two places at once that night.)  As a result of those circumstances, the crowd in the theater was small, just barely more than the number of people onstage.  And that makes it hard to generate any kind of collective audience response, which would in turn help feed energy back to the actors and help boost the performance still more.  Silence between segments in the show where audience reaction would normally be can drag a show down sometimes.  But you wouldn’t know it here.  The performers all went all out, despite the lack of a larger audience to encourage them.  This tiny crowd got a big show, which makes it doubly impressive.

“Tell someone your secret.”

Also like a lot of Sandbox Theatre productions, I found myself wondering, “What if they had more time?”  Words Do Move is fine, as far as it goes.  Right now, it’s only clocking in at a little over an hour.  In that time, it gives you a lot to think about, and a lot to take away with you.  Race, gender, sexuality, humanity.  Big topics given individual, deeply personal exploration.  And it took this ensemble as long as they had in rehearsal to get this far.  So what if they had another period of time together, now that they’ve built this trust, and expressed the first round of stories?  If they built on what they have now, where would they go next?  Where would they take an audience?  We probably need to go there, too.  Because all of Sandox’s theater is made from scratch, time is always a factor.  The place they end up is frequently fascinating, but what if they stuck that metaphorical dish back in the oven for another half hour, what would they pull out when it was done?

Speaking of things that continue to evolve, I’ve been around  for many of the Crane Theater’s growing pains as a new physical theater space, so it was very exciting to see actual physical walls that an actor could throw themselves against and not knock them over.  Kudos to all at the Crane for the latest stage of its evolution, and for theater companies like Sandbox that immediately make use of said space.

“Let’s be careful with each other.”

Like I said at the top, Sandbox Theatre's Words Do Move can seem strangely out of place in times like these.  But I think that just means that we need to make room for it.  Because as an audience member when you let Words Do Move into your head and your heart, you’re rewarded for it. (running now through November 17, 2018 on the Crane Theater mainstage)