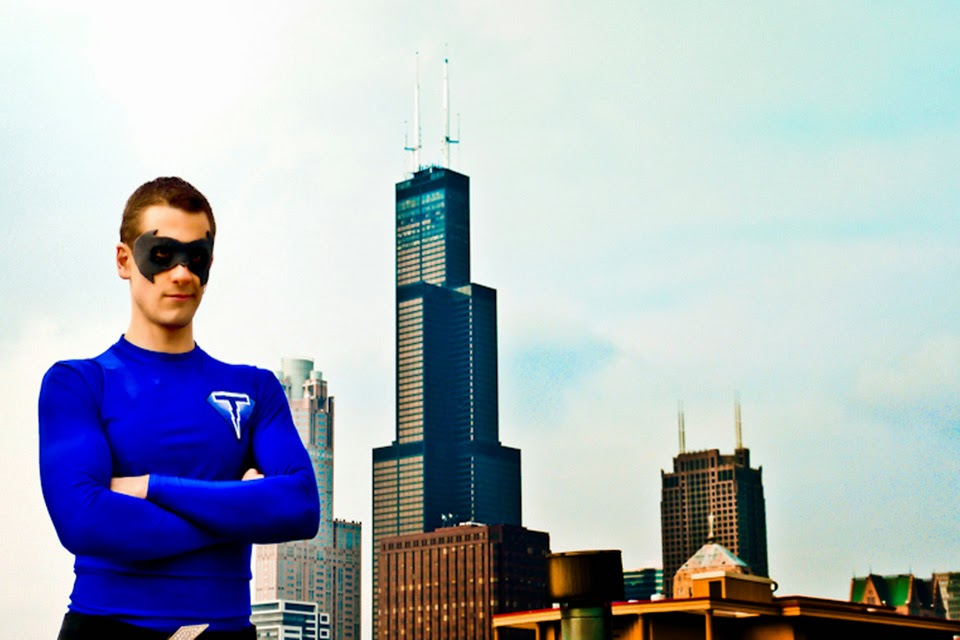 It’s one thing for a guy to be an amazing tap dancer, and that Tristan Bruns most definitely is.  It’s another thing for him to be able to dance so well with a partner like Kate O’Hanlon, who is equally adept on her feet.  The thing that kind of blew my mind about The Adventures of Tapman was that there were several times where Bruns as Tapman was dancing with an invisible partner.  It’s the main reason of many you should go see The Adventures of Tapman.

It’s hard to describe the invisible dance partner thing but I’ll give it a go.  Part of the storyline premise of The Adventures of Tapman is that his arch nemesis is Invisible Tapman, a cloning project gone awry.  Part of the economics of touring Fringe shows is, keep your cast as small as possible.  Part of the way you keep from looking cheap is to make something really cool out of necessity.  So the sound effect of Invisible Tapman’s menacing voice isn’t just an unseen acting partner for Bruns to use as a pretense to pretend to beat himself up onstage (though he does that convincingly, too).  Just like any other kind of musical accompaniment, the sound of Invisible Tapman doing his own evil dance routine is something that Tapman times his own dance steps in opposition to, and in unison with.  There’s a little tap competition, there’s counterpoint moves, there’s moments when they sound like they’re kicking off one another’s feet, or slapping hands.  But of course, the second person in the routine ISN’T THERE.  Bruns interaction with sound and empty space is so convincing in these moments, it’s kind of mind-boggling.  They also sing together which is ridiculously charming, and again shouldn’t work, but the dance has so thoroughly convinced you that, hey, why not?

The structure of The Adventures of Tapman is largely episodic like those multi-part serials they used to show before the main feature film in old movie houses that got recycled on TV on Saturday mornings (Flash Gordon, Superman, etc.).  Simple stories of heroes and villains and people in peril.  The whisper thin excuse for a plot isn’t really the point here, though.  It’s just a framework on which to hang different dance routines.  Bruns' sand dance in one sequence is an interesting variation on regular tap.  O'Hanlon later in the show starts a more modern dance style routine which Bruns steps into, tap on his side with modern on hers, and then weaving the two together.

The transitions here are sometimes a little spotty, but that’s always a problem with dance shows.  How do you give the performers a chance to catch their breath?  The fewer the number of performers, the harder that is.  Part of me kept wishing they had a third dancer, a musician or even a comedian, someone to entertain the crowd while giving the other performers some necessary breathing space.  Also, while Invisible Tapman is great as a dance partner, he’s not so useful as an acting partner in a scene.  O’Hanlon as Modern Marvel on a date with Invisible Tapman has probably the hardest scene to pull off in this regard.

The costumes didn’t change, so that really wasn’t a problem.  Actually, the superhero set-up might just be an excuse to get the cast in spandex, but when you have bodies like Bruns and O’Hanlon, no complaints there.  Go with your strongest selling points, grace and athleticism.

The audience should just go for the dancing in The Adventures of Tapman, forgive some of the trappings around it.  The dancing is amazing.  In fact I was waffling back and forth between giving this 5 stars instead of just 4.5.  The dancing is so good, it could almost make me gloss over the rough spots.  The performers are so incredibly friendly and good-natured, I hope the Fringe community here embraces them in like fashion.  There’s a great little moment at the end of the show where anybody with tap experience at any level is invited up for a tap farewell number that we’re told is a tradition in the tap community wherever you go.  It was delightful to watch performers and audience merge a little, and in perfect keeping with the spirit of this lighthearted show.