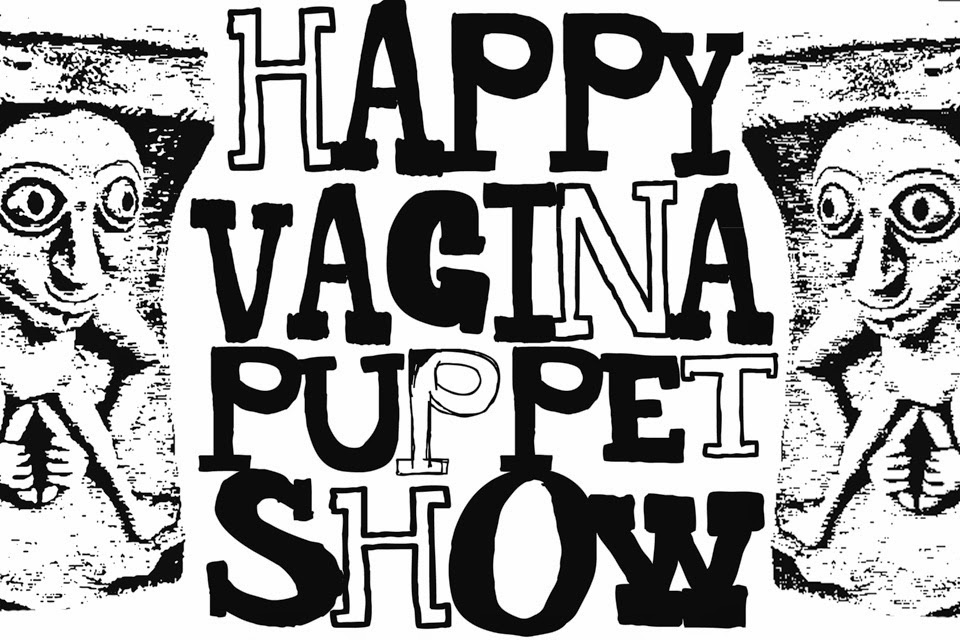 I love the fact that, at Fringe time, there are things called Happy Vagina Puppet Show.  And that I have a mother who is game to accompany me to something called Happy Vagina Puppet Show.  As previously tweeted, Mom was willing to be quoted as saying, “I’ve never seen so many vibrators in one place before.”  And apparently they can also be used for eating pudding - just one of the many helpful hints you can take away from this show.

Let’s face it, Happy Vagina Puppet Show is odd.  But it’s supposed to be odd.  It’s also playful and full of energy and joy.  It lives up to its title.  No angst here.  It’s a celebration of, well, vaginas and the womanhood and mothering they represent.  The performers (Liz Carey-Linskey, Michelle Casall, Stephanie Dedieu, Megan Koester, Shannon Leach, Michelle Makie, Peter Rusk and Garrett Vollmer, led by director Tyler Olsen) are all clad in black and are just as happy slinking around on the stage floor as they are upright and comically dancing.  The “no big deal” attitude they take toward their subject goes a long way to normalizing something people normally respond to squeamishly in public forums.

The primary stand-in for the titular vagina is a large silver shiny length of tubing, which Mom likened to a Slinky toy with skin on it but which might just as easily be familiar to people as duct work around laundry dryers and other ventilation systems. The Vagina Puppet is big enough for human performers to be inside of and manipulate in routines straight out of Mummenshanz.  It wanders and rolls around, pokes itself between women’s legs, produces useful props like ukeleles, and even gives birth later in the show.

There is also the clever use of deliberately crude cartoons and shadow projections, in addition to all those previously mentioned vibrators.  There is an enthusiastic dance celebration of pubic hair, I think, and a dance tribute to tampons, as well as the breaking of hymens in a ballet set to the tune of “Like A Virgin” (of course).

I know this all sounds quite random and weird, but it’s also all very much in good fun.  Dangerous Productions is taking a brief respite from freaking us out with horror theater to stop and say, “Hey, no need to be uncomfortable, vaginas are your friend, and they’re pretty great.  Enjoy!”