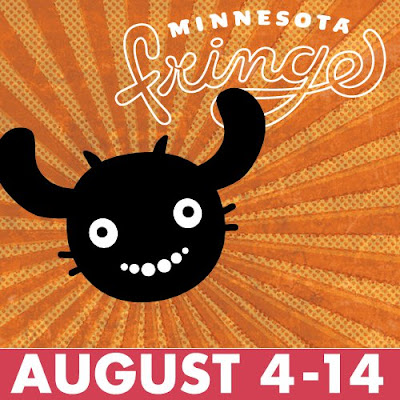 The road crews are clearly trying to force me to reduce my carbon footprint this year.

With construction on 94 in both directions, University, Hennepin and Lyndale, every major drag that I'd normally use to zip across town between Fringe shows is hopelessly clogged, even in the best of times, and during rush hour, forget it.

Robin Gillette, Executive Director of the Minnesota Fringe Festival, artfully dodged the "what's the best Fringe show to see?" question by bringing it up herself. Not answering it of course. The Fringe is non-juried. But she did have advice for Fringing this year.

More this year than in any year past, flying across town just isn't gonna happen.

So one of my main challenges in cobbling together a Fringe schedule this year has been that I'll see a show I'm interested in, but it's on the other side of town from the one I just saw. So, I have to decide what part of Minneapolis I want to be in, and then find as many nearby shows as possible.

Thankfully, in most cases, there are many to choose from, but it means delayed gratification. Those Rarig/Augsburg/Mixed Blood/Playwrights' Center/TRP shows will all need to wait for another day, since I'm on a Bryant Lake Bowl/Intermedia/HUGE/Theater Garage axis at the moment, for instance. (Cult Status Gallery is lucky it's nearby). Gremlin, The Lab and Mill City Museum are more of a challenge, as they're pretty much on their own. For the right show, though, you make it happen.

And shows that might not otherwise be toward the top of my list get a boost because they're in the right place, sandwiched between shows I'm more anxious to see.

So everybody wins, just in a different way.

It's just really hard for me to focus on just one part of the scheduling grid and not look at it ALL. There's so much to see.